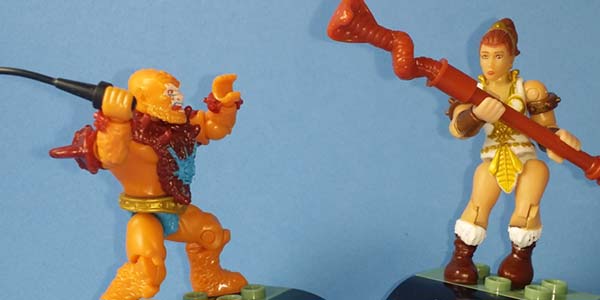 Masters of the Universe is seeing a retailer resurrection of sorts, thanks to Mattel’s highly successful and very sought-after Mega Construx Heroes collection.

Gauging regional Walmart space for series 1, He-Man and Skeletor were universally the first ones purchased. Although they are considered block figures, they have the articulation, proportions, and accessories to definitely be regarded as mini-MOTU Classics action figures. Mattel’s Mega Construx Heroes Series 2 include new warriors for good and evil: the Warrior Goddess Teela and the savage Beast Man.

As before, the figures are displayed fully assembled in a very nice compact card. Teela’s weapons and the stands do require some minor assembly, and if all of the pieces are pulled apart, a nifty construction blueprint is accompanied, too. Beast Man includes a nicely-rendered whip and armor, and Teela has her trusty Staff of Ka and shield. Like He-Man and Skeletor, one hopes that Teela will come in a future construction set with her remaining cobra armor and sword. My only small nitpick is that since we are getting the Captain of the Guard and not the sometimes-Sorceress/Goddess of the mini comics, I would have taken the sword over the staff. She does include her vintage weaponry, so I do appreciate the choice made.

Each Mega Construx Hero is packed with the same fantastic universal articulation: neck, ball shoulders, elbows, wrists, waist, ball hips, knees, and swivel ankles. This looks fantastic for the muscle-bound men of Masters of the Universe, but Teela does take on a chunkier aesthetic that some may not embrace. It’s a coin toss how one perceives this: one the one hand, the block design isn’t complimentary to a slender character, and the construction/block figures always maintain the same overall look, regardless of character or gender. On the other hand, Beast Man, He-Man, and Skeletor transcend or defy the block aesthetic by merit of their musculature. 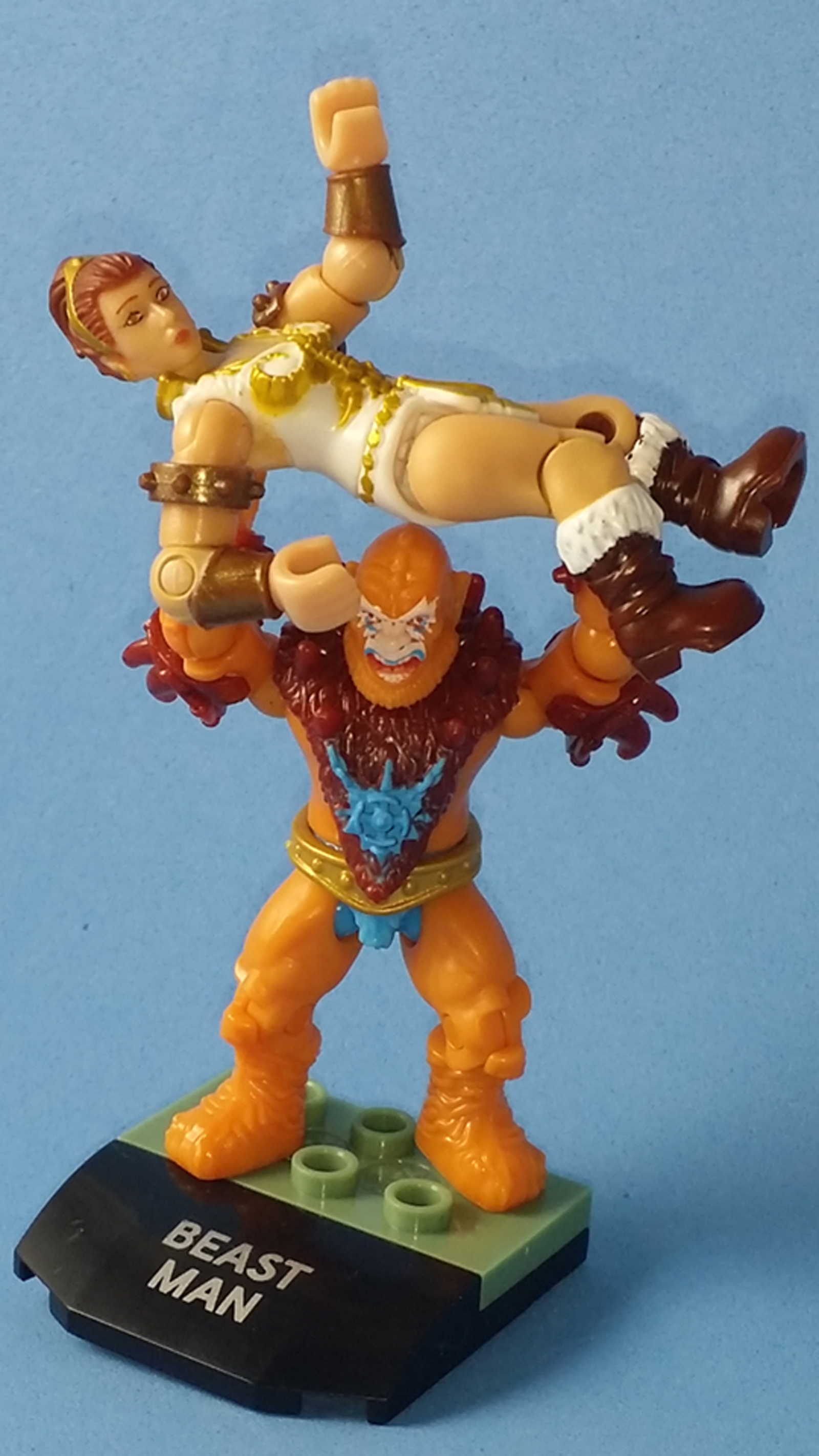 Reviewing other Mattel construction sets to find a solution from within, there appears to be a modern TMNT set featuring a Casey Jones with slender arms that Teela would benefit from, with the trade-off being no elbow articulation which may account for the arms’ bulk. Her arm bands may be also contributing to the issue. Again, it’s a block-based line. As she is, she looks a like a fantastic translation from the Classics Teela figure 10 years ago. However, the idea could be courted of another Teela with her missing cobra armor and sword appearing with the alternate set of arms (and legs?) described above. As least then, both camps would be happy with a version that best suits them.

The paint used is minimal, with the main colors represented with the plastic. What is applied looks great overall, with Beast Man being a particular standout in series 2. The face paint and medallion is quite specific on such a small toy, and the one I have came out beautifully. He also has a slightly dark wash on his impressive armor. Teela received an eye tampo, a solid solution. Eyes, however, need exacting standards, and on such a small piece, they can be hit or miss. Hopefully, this can be remedied in future assortments. One might need to dig through a full case to find an acceptable paint job. It’s a small thing, but if a fraction of an inch can render a face cross-eyed, purchases may be lost.

If you are even a casual He-Man or block collection fan, do your self a favor and buy the Mega Construx Heroes figures. It’s a fun new way to collect in a space-friendly scale loaded with the same articulation, but at a small price-point. Also, for those who can’t wait, there are now parts to customize Faker, Evil-Lyn, Stratos, Mer-Man, among other popular characters. Lastly, but certainly not least, a recent Facebook poll was conducted where Mattel asked fan about Fisto, Mekaneck, Tri-Klops, and Webstor for wave 3. One can only hope vehicles and playsets are on the horizon, be it retail or San Diego Comic Con. Whatever form it takes, a big thank you to Mattel for returning Masters of the Universe to toy store shelves! 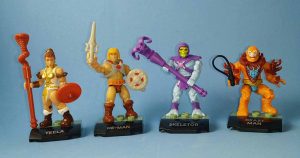 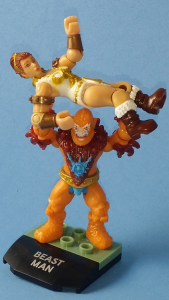 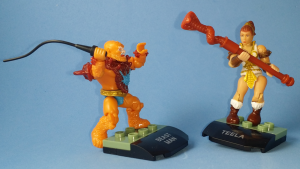 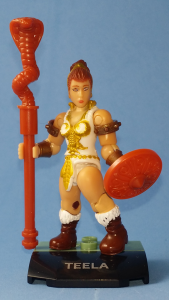 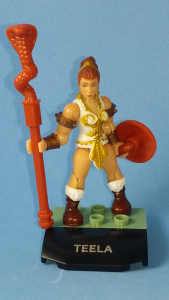 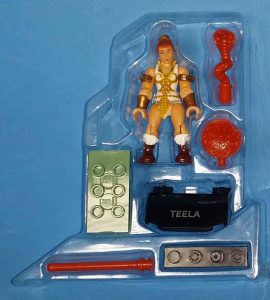 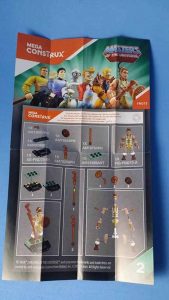 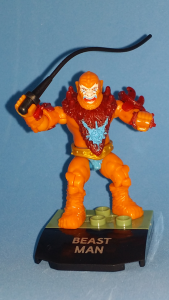 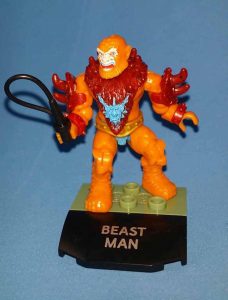 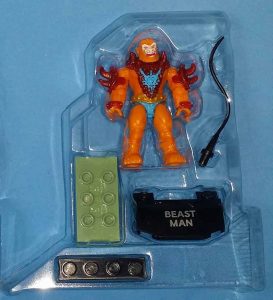 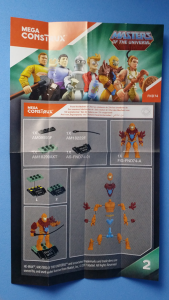 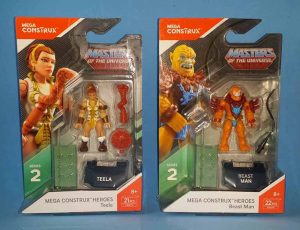 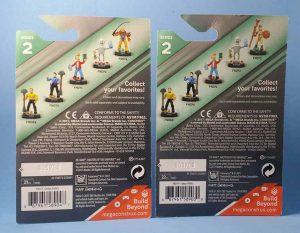