Frankenstein’s Monster is a Killer Piece from Mezco 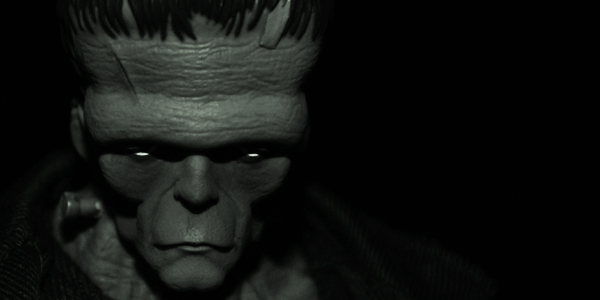 Just in time for Halloween, the good people at Mezco have released an absolutely stunning figure based on Frankenstein’s iconic monster.  Although they went with a stylized and unique take on the beloved character, the monster retains all the classic charm that makes his design so timeless and wonderful.

Earlier this year, we had a chance to see the full trio of Mezco’s Universal Monsters pieces, including Frankenstein’s Monster, the Creature from the Black Lagoon, and the Mummy, at Toy Fair.  While you’ll have to wait a bit for the two latter figures to become available, Frank has now been released as a standard colored version and the limited grayscale edition pictured in this review.  Both versions are identical save for the paint job but, with only 100 produced, the black & white model is understandably harder to come by.  Now these guys were already pretty damn impressive behind glass but, after having the chance to actually hold the figure and put it through its paces, it became clear just how wonderful this piece is. 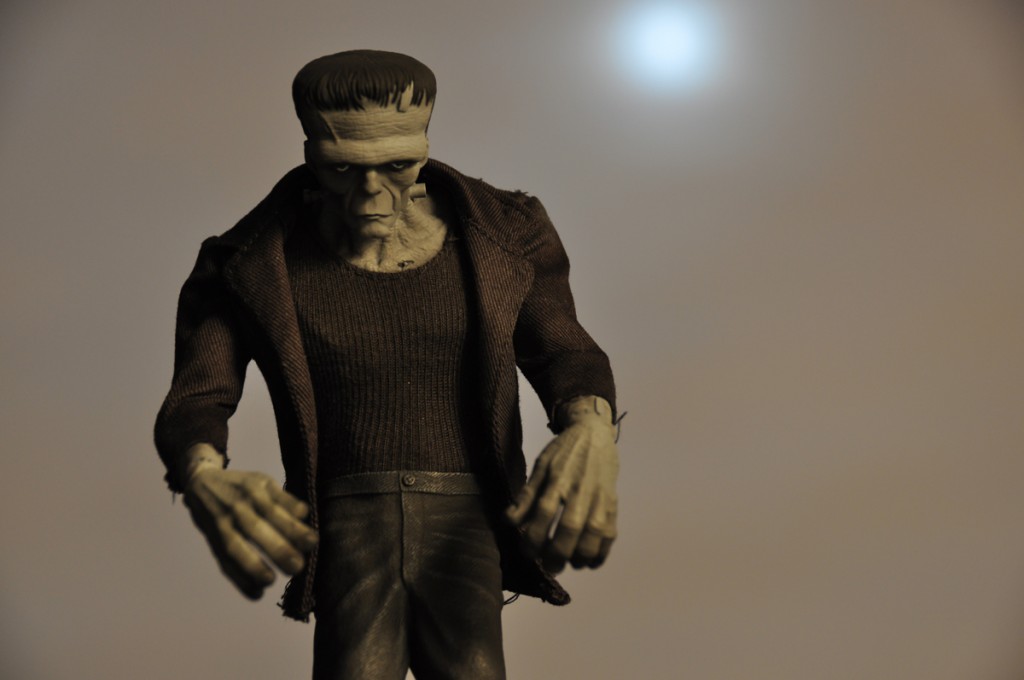 Although I couldn’t get the Monster out of his box quickly enough, collectors will appreciate the box’s large viewing window and the fact that he’s extremely easy to take in and out without causing any strain on the packaging.  When you hold the figure itself, the first thing you’ll notice is how solid and weighty he feels.  Measuring over nine inches tall, Frankie has the heft to back up his monstrous build.  The detail in the sculpt also becomes even more apparent when you get to see this guy up close.  From the subtle but very fine pattern in his pants and shoes to the lifelike textured skin and expressive facial features, the Monster is an amazing looking toy.  The plates his forehead and left arm are a great touch and I love the slightly asymmetric neck bolts as well.  Thanks to the super clean paint job, the various stich marks really stand out and the whites of his sunken eyes contrast beautifully against the darker shading.  As you can see, Mezco’s take on Frankenstein’s creature isn’t a straight up visage of Boris Karloff – instead, he sports a look that’s a little cartoony without going so far as to look like a caricature.  This may put off some folks looking for a more realistic take on the character, but that’s been done plenty of times.  What you get here is a truly unique sculpt that actually adds a ton of charm and personality to one of cinema’s greatest and most tragically misunderstood monsters.  It speaks volumes to Mezco’s designers that Frank’s sculpt strikes the perfect balance of creepy and lovable. 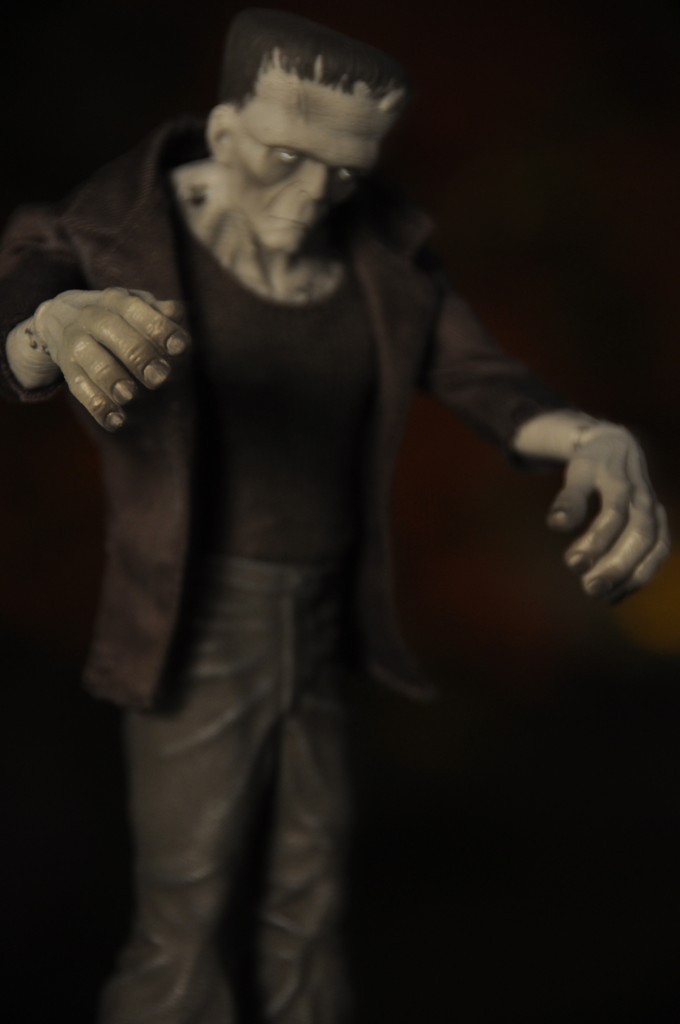 Usually, I’m a proponent of packing as much articulation into every toy as possible, but this is one of those pieces that totally benefits from an elegant “less-is-more” approach.  After all, Frank shouldn’t be contorted into a Spider-Man-like pose — he should instead appear stiff, lurching forward menacingly.  Although Mezco’s sculpt does a brilliant job hiding all the moveable points, there is some subtle movement in the ankle cuts and a great range of motion from the disc-pin shoulders with swivel joints in the elbows and wrists.  The waist is even ball-jointed to allow for some really spectacular torso positioning, but the ball joint in the neck is what really knocks it out of the park.  The head can be tilted or cocked in any number of terrific positions and, coupled with the killer sculpt, adds so much to the figure’s aforementioned personality.  Every joint on my figure has an incredibly smooth action, without any feeling wobbly or overly tight, and stay right where you put them – definitely quality craftsmanship all the way.

If I had to pick one thing that makes the Monster stand out above all else though, it would be his shirt and jacket – both made of real cloth and perfectly tailored to compliment his form.  For the most part, I’m not big on putting real clothes on action figures, primarily because they never quite look like they belong there.  Cloth coats and jackets have a tendency to sit awkwardly and look too bulky and ill-fitting or, worse yet, completely impair joint movement.  This is a different story altogether and I can’t imagine the figure assembled any other way.  The undershirt is stretched over the upper torso and tucked at the waist, so there is no bunching or impairment in the waist movement.  Similarly, there is just enough material in the sleeves to  allow the arms their full range of motion while still appearing form-fitting.  The edges are even a bit rough and tattered to resemble an old, worn suit.  Blending into the hard plastic pants perfectly, the shirt and jacket provide a great variation in texture and simply look amazing – probably some of the best clothes I’ve ever seen on this type of figure. 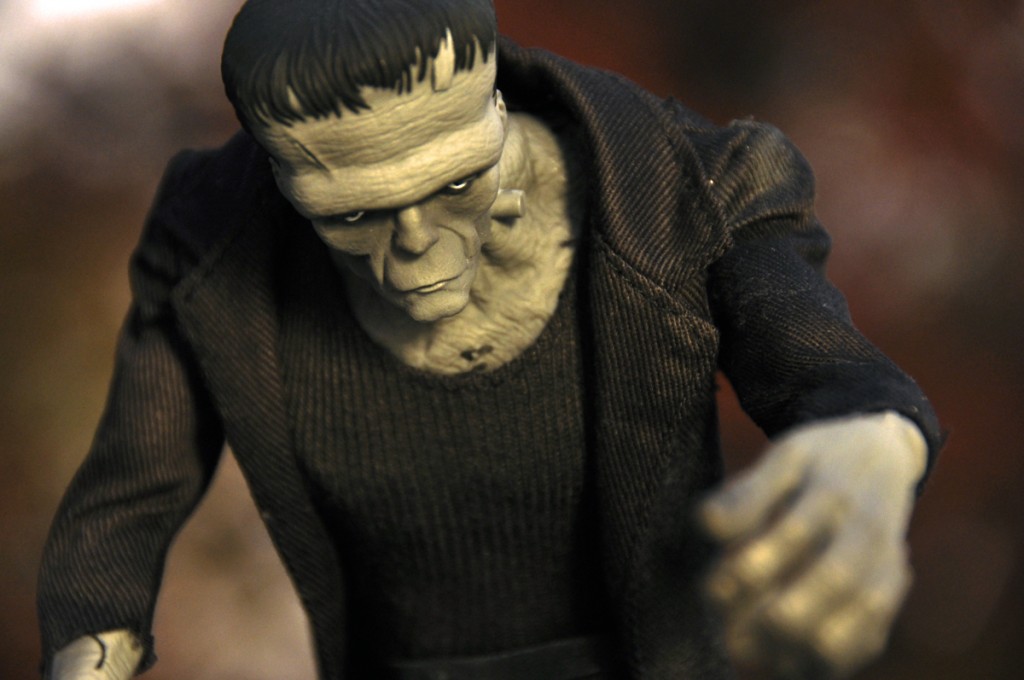 Odd as it may sound, this is one of those pieces that makes me wish I was a kid again; when it was socially acceptable to carry around your favorite toy with you everywhere you went.  I can totally see my much younger self toting Frankie around, inappropriately making him stomp around in public places and helping him pick flowers to offer to other toys before throwing them into the closest body of water I could find.  Thanks to the solid construction on this guy, he does seem equally well-suited to be played with or kept lovingly perched on a collector’s shelf.  Either way, you’ll get plenty of enjoyment out of him.  If you can track down a retailer that has him in stock (I just saw a few at my local Toys ‘r’ Us), the standard version of Mezco’s Frankenstein will only run you around thirty bucks, which is an absolute steal for what you get.  Meanwhile, eBay may be your best bet if you’re looking to score the limited black & white version.  I’d like to say I prefer one to the other, but the aesthetic differences aren’t overwhelming — the color version sports a pale green skin tone, a touch of red in the forehead wound and stitch lines, and a silver coating on the metal plates and bolts as opposed to the limited figure’s monochromatic palette.  Frankenstein’s monster is an intensely cool figure either way and, after seeing what a stellar job Mezco did here, I can’t wait to get my hands on their other upcoming takes on the Universal Classics. 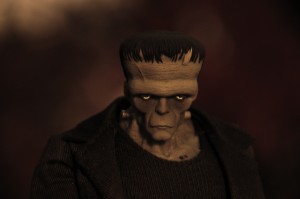 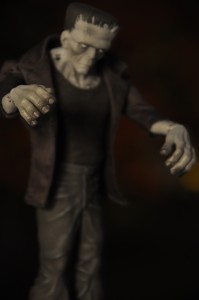 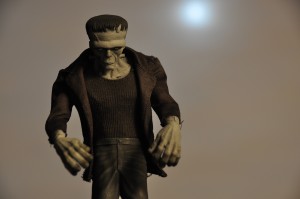 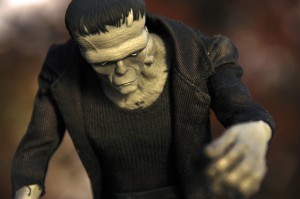 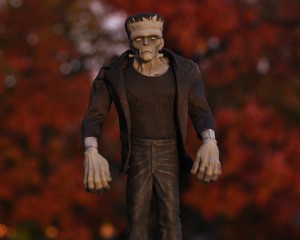 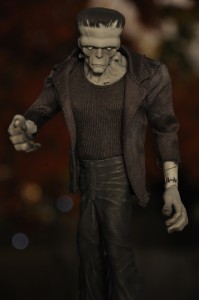 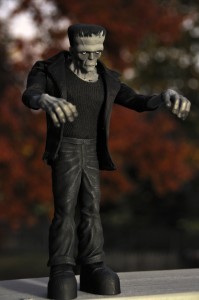 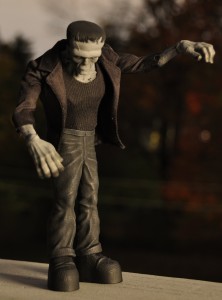 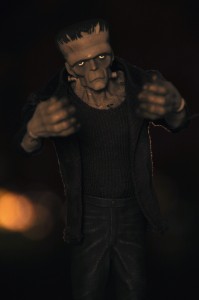 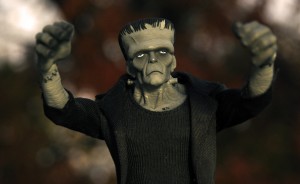 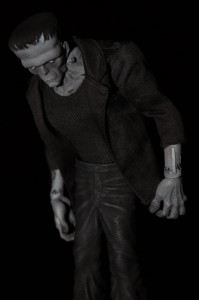 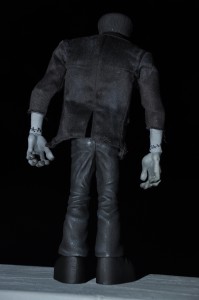 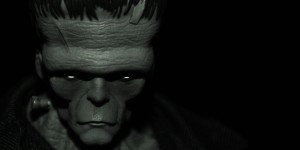