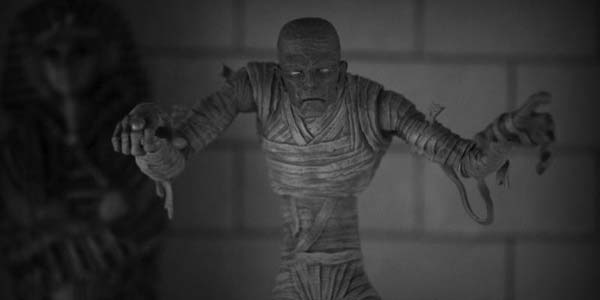 New York Comic Con is getting a double-dose of Universal Monsters thanks to Mezco!

I LOVE Mezco’s stylized Universal Monsters figures.  These guys are so cool to look at, featuring great character designs that read as perfect animated style adaptations of the classic creatures, while still holding some reverence for the original cinematic designs.

So far we’ve seen Frankenstein and the Creature From the Black Lagoon released, with full color versions at retail, and black and white variants long sold out at the past years’ Comic Cons.  The third figure in the line is The Mummy, and he’s finally seeing release as a black and white variant at New York Comic Con this October.

If that we’re enough monster love for you, Mezco has also cleverly re-released their Frank figure in a new deco and fur coat as the Son of Frankenstein.  I honestly never would have thought of that, but it’s a great idea!  Sadly, Son of Frank will be the only figure not released in a limited edition black and white colorway (at least, not as of right now), but he’s a great looking figure, and I really like how eye catching the brighter green skin and rich brown fur vest make him look unique.

Here’s more details on both Universal Monster exclusives, which will be sold in limited quantities at NYCC, as well as available for preorder at Mezco’s website this Friday, August 22nd.

Buried beneath the sands of time he rested, until he was awoken by Mezco’s award-winning design team.

Imhotep, the iconic terror from the beneath the sand is presented in glorious black and white, just as he was in the terrifying 1932 classic film.

One of the most limited Universal Monsters ever produced by Mezco, he is an edition of only 250 pieces worldwide. Will he protect those lucky 250 from the curse of Amon-Ra? Only time will tell.

He stands 9″ tall and captures the intricate detail of each ancient bandage: from his mysterious eyes, to his legendary scarab ring.

With 11 points of articulation he’ll be able to take out any explorer who dares to come between him and his tana leaves.

He is packaged in a full color, collector-friendly window box.

Following the success of their Universal Monsters Frankenstein, Mezco opens their laboratory door and reveals the Son Of Frankenstein limited edition figure.

This 9″ scale Frankenstein boasts ten points of articulation and is covered with scars from his assembly. Perfectly capturing the iconic look of the classic film, the monster wears a genuine simulated fur tunic with cloth sleeves. He stands atop his signature boots, towering over other figures.

Only 500 of this exclusive Son Of Frankenstein figure are available worldwide, so get yours before the villagers do!

These Mezco Exclusives are Limited Edition. A select number of collector’s items will be available online at http://www.mezcotoyz.com/exclusives/ , beginning August 22nd. Don’t delay because once they are gone, they are gone forever! 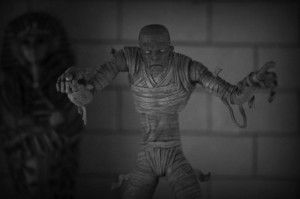 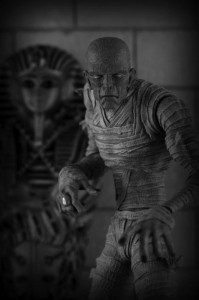 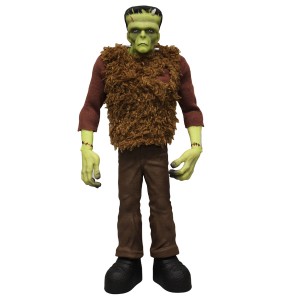