Mezco Toyz Is ‘Conjuring’ Up An Annabelle Doll 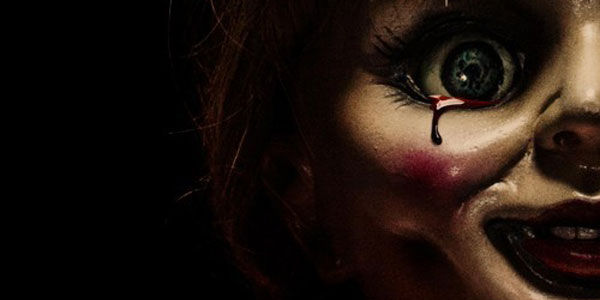 Mezco Toyz announces merchandising rights for one of the most promising horror franchises in the game.

I LOVED The Conjuring.  It was a smart, stylish and blissfully atmospheric horror film, one that was confident enough not to resort to cheap jump scares, and one smart enough to realize you increase the tension exponentially whenever you make your characters believable and likeable.

It also got that you increase the CREEPINESS exponentially whenever you feature a doll in a movie.  Hence, Annabelle, the allegedly haunted demon doll caged inside the collection of those plucky paranormal investigators, The Warrens.

Annabelle is getting her own spin off movie this October– which probably won’t be very good– but damn if she wasn’t perfectly spooky in The Conjuring.  So I’m stoked to see Mezco kicking off their line of Conjuring merch with an Annabelle doll, specifically one in their popular Living Dead Doll format.  That’s a great fit for our little demon, in my opinion, and should make for a fun addition to this long running collection.

This feels like the latest in a line of big wins for Mezco, and I couldn’t be happier– these guys are responsible for some of the top toys of the past decade, and their recent properties and exciting new formats really make it seem like they are once again finding that perfect balance of format and subject matter.

Here’s Mezco’s whole release on Annabelle… it’s also worth noting they’ve added a mystery item to their NYCC exclusive graphic, which looks to be something in the 6″ scale.  This press release suggests it would be Annabelle… but if it’s a preview edition of The One:12 Collective Dark Knight Batman, I will start camping out in line tomorrow.

Horror fans first entered the world of the paranormal investigation team the Warrens in 2013 with THE CONJURING. Terrified theatergoers couldn’t get enough of the twisted tale, helping it become one of the highest grossing horror films of all times according to Forbes magazine.

Annabelle, the doll so evil even the Warrens were afraid of her, now returns to the big screen in ANNABELLE, a film dedicated to her terrifying origin. First introduced in THE CONJURING, the upcoming ANNABELLE tells a tail filled with malevolent entities and killer cultists.

Mezco Toyz is no stranger to the world of the bizarre, the shapeless form in the shadows, and the whisper in the dark…so clearly there is no better choice for a producer of THE CONJURING and ANNABELLE merchandise.

Mezco’s award winning design team has already begun creating an Annabelle version of their world record holding Living Dead Dolls, and has many more scares tucked away for the future.

Mezco’s unholy collectibles of the damned will arrive in stores in late 2014.

ANNABELLE arrives in theatres in October 2014.