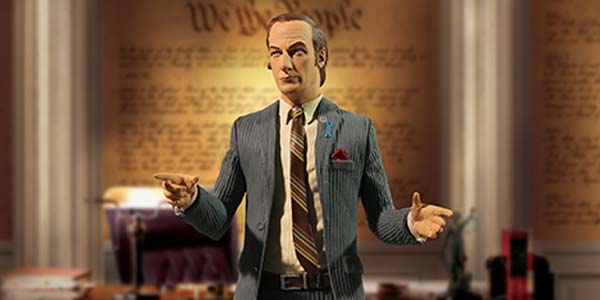 Can you really say you don’t want your own Saul Goodman action figure?

Saul Goodman is such a rad character.  Even before his really very good spinoff show, Walter White’s sleazy yet incredibly talented lawyer stole virtually every scene he appeared in on Breaking Bad.  Plus, he’s played by Bob Odenkirk.  There is literally nothing not to love about this guy.
I’ve been anxiously awaiting the release of Mezco Toyz’ Saul figure, and now that wait is almost over– Goodman will make his debut at Comic Con with a special SDCC variant.  This version of Saul features his typical pinstripe business suit (completing the look with frumpy tie, wireless headset and a Wayfarer 515 awareness ribbon on his lapel), and will be packed in a window box made up to look like his office from the TV series.
If that wasn’t enough, Saul also includes a full-sized replica of his business card, making this THE definitive collectible for this character, in my humble opinion.
The figure will be for sale at Mezco’s booth at SDCC this summer, but they’re running a preorder for non-attendees starting Friday May 15th, so those of us not going to Comic Con can still let Saul sleaze his way into our toy collections (and hearts).
Here’s more details from Mezco:
Fans will have no objections to Mezco’s very special addition to their intensely popular Breaking Bad line: Limited edition variant Saul Goodman with office diorama.
In Breaking Bad, Walter and Jesse narrowly made it through their troubles with his legal counsel and now this 6″ figure can stand as a reminder that when you’re in a bind, “Better call Saul!”  He comes in a deluxe window box designed to replicate his constitution themed office so often seen on the show.
With its unique mural and Corinthian columns, Saul’s office is one of the most recognizable and well-known settings in Breaking Bad.  The box comes with a themed slipcase exclusive to this edition.
His pinstriped business suit is complimented by his token wireless headset and light blue Wayfarer 515 awareness ribbon. This Limited Edition Variant Saul Goodman comes complete with a full size business card and a bag of cash (surely acquired through entirely legal channels).
A limited amount will be available online at http://www.mezcotoyz.com/summer-exclusive-saul-goodman-figure beginning Friday 5/15t, but don’t delay because once they are gone, they are gone forever!
Be sure to visit Mezco at San Diego Comic Con at booth 3445. 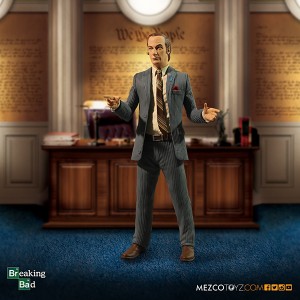 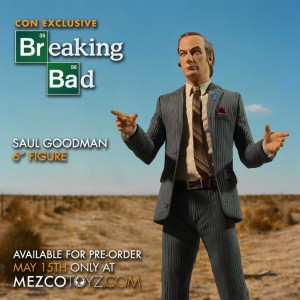 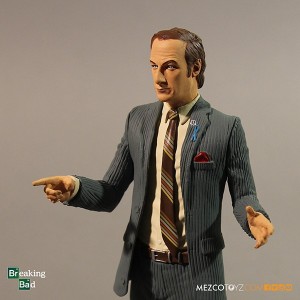 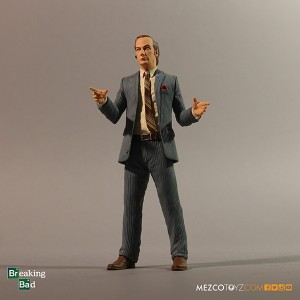 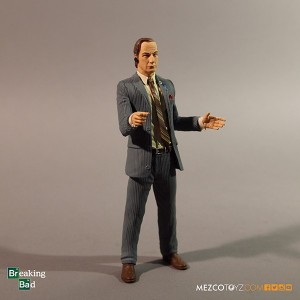