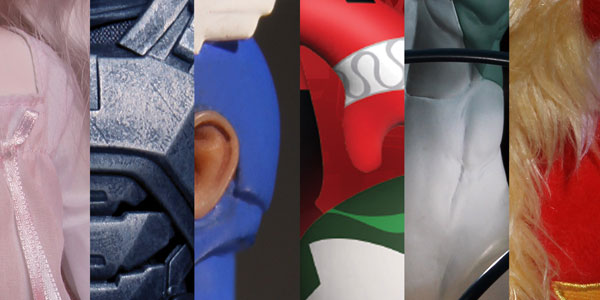 Mezco offers a teaser of their six traveling Convention exclusives for 2016.

It’s the most wonderful/ terrible time of year, when all the toymakers start to reveal their Comic Con exclusive offerings, and the latest announcement comes from Mezco Toyz, who posted a teaser image on Twitter earlier today, offering an small glimpse of each of their six exclusives.

What do we got?  I think I figured most of the out:

1. A Living Dead Doll (no idea who though… what do you think?)
2. One:12 Armored Batman from Batman v Superman
3. One:12 Captain America (the Modern variant shown at Toy Fair)
4. Harley Quinn & The Joker Mez-Itz (Maybe more characters to add to the comic-based Mez-Itz collection, too?)
5. 18″ Tigra (a Glowing-in-the-Dark eyes variant to match 2013’s Cheetara?)
6. Plush Snarf (also seen at this year’s Toy Fair display)

Not a bad lineup!  Mezco actually handles exclusives better than pretty much anyone, offering their items at both San Diego Comic Con and New York Comic Con… and even making available a small batch of each item for pre-order to non-attendees via their website.  The web orders tend to ship after SDCC, meaning attendees still get first access, and thus don’t really have a leg to stand on when they gripe about people not attending the show also having a chance to (eventually) own the items.

Mezco also says they will be back with the full reveal of all six exclusives very soon.

What do you think, did I get anything horribly wrong in my guesses of Mezco’s Con exclusive lineup?  Which one is your favorite?

Me, I remain– as always– all about that Cap.