Mezco’s One:12 Deadpool Reps the X-Men For Comic Con 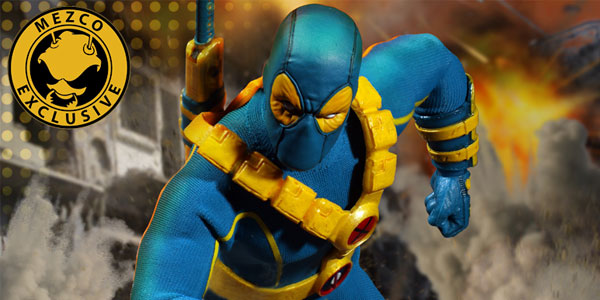 A blue and yellow X-Men variant of the Merc with the Mouth is coming to Comic Con this summer, courtesy of Mezco’s One:12 Collective.

Mezco’s super-promising One:12 Collective Deadpool is set to be released in just a few short months, and there’s a cool X-Force variant due out later this year exclusively through Previews. And now, a third colorway– based on Wade Wilson’s blue and yellow X-Men outfit, has joined the ranks of Mezco’s 2017 summer exclusives.

X-Men Deadpool features an all new color scheme, and lots of accessories, including a rifle, a sword and sheath, an alternate head and hands, and more. While this guy’s arsenal doesn’t feature any heretofore unseen bonus pieces, he does get a pretty baller X-Men insignia display stand, and an eye catching fifth panel window box, in the same blue and yellow color scheme as the figure itself.

This figure is being touted as a “summer exclusive” because, while your first chance to get Deadpool in hand will be at SDCC, he is available in limited quantities right now at MezcoToyz.com, to be shipped after the Con.

Check out photos and full details on the X-Men Deadpool below, straight from Mezco: 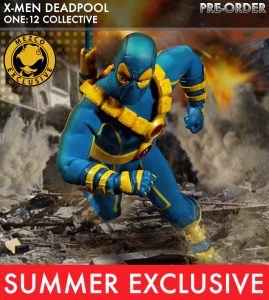 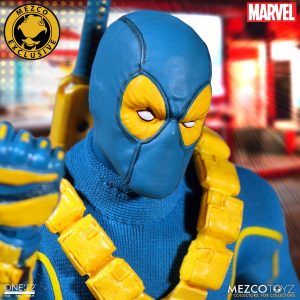 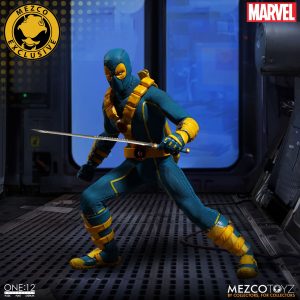 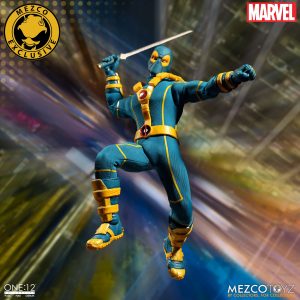 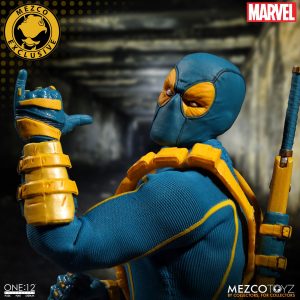 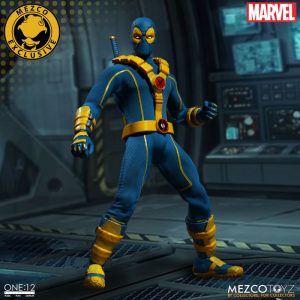 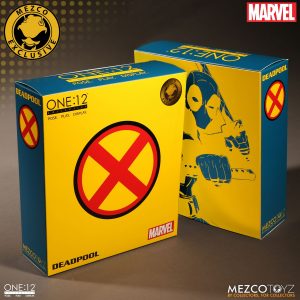 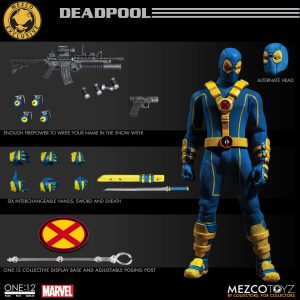 Wade Winston Wilson, known to the world as Deadpool, is a disfigured and mentally unstable mercenary with the superhuman ability of an accelerated healing factor and physical prowess. He is presented here in his blue and yellow X-Men outfit. If you think it’s strange to see Wade Wilson in a X-Men outfit, then you are not alone because Deadpool thinks so too! Deadpool tried on X-Men attire as a bet with Wolverine and Beast in the Cable and Deadpool comic series. Deadpool,decked out in his blue and yellow X-Men attire, joins the One:12 Collective with a comprehensively detailed outfit and portrait sculptures.

This limited edition Mezco Summer Exclusive is only available via our website and at the Mezco SDCC booth # 3445— while supplies last.

Costume:
Sculpted gloves on each hand
Vambrace on each forearm
Harness with sculpted pouches
Sculpted boots

Each One:12 Collective X-Men Deadpool figure is packaged in a deluxe, collector friendly box, designed with collectors in mind, there are no twist ties for easy in and out of package display.

This Summer Exclusive The One:12 Collective X-Men Deadpool is only available through the Mezco Toyz website or the Mezco Toyz SDCC booth # 3445. Expected to ship: July-September 2017.