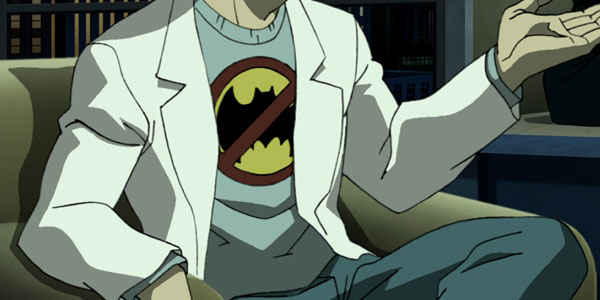 Michael McKean just can’t stay away from the fanboy realm. The versatile star of film, television and stage continues to deviate from his mainstream roles to appear in all forms of super hero entertainment, this time lending his voice to the egomaniacal Dr. Bartholomew Wolper in Batman: The Dark Knight Returns, Part 1.

Frank Miller’s landmark graphic novel, Batman: The Dark Knight Returns, Part 1, is the next entry in the popular, ongoing series of DC Universe Animated Original Movies. The film arrives September 25, 2012 from Warner Home Video as a Blu-ray™ Combo Pack and DVD, On Demand and for Download.

McKean is best known for his portrayal of David St. Hubbins in This Is Spinal Tap, a role he’s been perpetuating along with his bandmates for more than a quarter of a century. McKean actually is a talented musician – he’s quite handy with a harmonica, guitar or keyboard. His honor role of movie credits include Best in Show, 1941, Planes, Trains & Automobiles and A Mighty Wind.

McKean initially drew the public’s adoration as the first half of the inimitable duo of Lenny and Squiggy on the 1970s favorite, Laverne & Shirley. He served as the self-centered, sex-driven boss Gibby on one of HBO’s first original sitcoms, Dream On; and he was a member of the core cast on Saturday Night Live from 1994-1995. McKean’s primetime appearances number in the dozens on series like Friends, Curb Youth Enthusiasm, Law & Order (two different characters, eight years apart) and The X-Files.

Even within those roles, McKean found his way into fanboy fun – playing Perry White during a 1995 SNL. He would revisit the role six years later on Smallville. In fact, McKean is one of only seven actors to appear in both Lois & Clark: The New Adventures of Superman and Smallville – and the only one to also give voice to a character in a DC Universe Animated Original Movie.

McKean’s been to the Batcave before, too. The New York native voiced the 1950s Joker and a Mutant in the “Legends of the Dark Knight” episode of The New Batman Adventures, as well as voicing Sneak Peek for Batman Beyond. For Justice League, he voiced The Sportsman.

The DC Lineage dips into his personal life, as well. McKean is married to actress Annette O’Toole, who has the distinction of playing Lana Lang opposite Christopher Reeve in Superman III, and as Martha Kent for 10 years of Smallville. McKean obliged us with a few minutes to chat about his latest animated role, and a few other subjects near and dear to fanboy hearts. Take a read …

QUESTION: How did you come to think of Arkham Asylum psychiatrist Dr. Bartholomew Wolper?

Dr. Wolper is a very, very good shrink … if you ask him. He’s a guy who likes the sound of his own voice; he finds his ego very soothing, even though it seems a little ponderous from the outside. But he is convinced of his own genius, and definitely convinced that these poor, twisted souls who have been entrusted to his care are redeemable because he knows who the real bad guy is.

QUESTION: And that “bad guy” is?

Wolper thinks that Batman is a social disease. He thinks that it is, in fact, Batman’s ego that is driving the crime wave in Gotham City. And he sets out to prove it. I don’t think he actually makes the case, but you can’t tell him that (laughs) … or anything else, for that matter.

QUESTION: How did you approach playing this character?

My first impulse was Dr. Phil, but it didn’t work – it was too folksy. I think that a man whose ego is such a construct that it supersedes everything else around him, that’s kind of an interesting character to portray. There are some great examples in history. And I think a man who plays God – especially when it concerns human intelligence, human psyche, human emotions – he’s kind of like a prestidigitator. He’s the expert in the room, and when he tells you something is so, he expects you to believe it. And it’s only when he comes right up against the real world that it all falls apart.

QUESTION: In addition to acting, you also direct. And you’ve worked with Andrea Romano on a number of projects. What makes Andrea so good at what she does?

Andrea Romano has a kind of a soothing, friendly personality, which of course masks a tyrant (laughs). Kidding, kidding. I think she’s an amazing talent and I trust her implicitly. Often if I’m directing, I’ll say, “Look, I won’t give you a line reading, but” and then I’ll try to make my case and get you to say what you’re supposed to say. As an actor, I actually ask Andrea for a line reading, because she knows exactly what she’s doing. She’s been doing it a long time, and she’s the best in the business. So I utterly respect her taste and opinion. And she’s also a great cheerleader – there’s never a time when I think “Geez, I don’t know what I’m doing here.” Even if I don’t know what I’m doing, she always convinces me that I do … and then she sets me straight (laughs). It’s kind of brilliant.

QUESTION: Does being part of a Batman film have any personal significance for you?

When I was a kid, I adored the Bob Kane’s 1950s Batman. I liked the Superman comics and Justice League and Flash and the Atom – nobody does The Atom anymore, and that was a cool super hero – but I did love Batman. I loved the fact that they always found a way to stage the climactic scenes in a warehouse of gigantic toys, or huge oversized stuffed animals. And even as a kid, I sort of knew, “Well, (Kane) is sort of bored. He wants to draw something new other than just a street corner and a couple of guys fisting it out.” So I was a big comic book fan, and I loved the DC stuff.

When I went to college, the ABC series began airing. I was at Carnegie Mellon and I’ll never forget that everyone was looking forward to Batman and it was going to be the best thing ever. In those days, there was only one or two TV sets in the entire dorm. So we went down to the common room at McGill Hall and the show came on – and the minute the “pows” and “bams” and sound effects came on screen, the whole place went insane. Now these were all young men of ages 17 to 23, but suddenly we were all kids again. It was phenomenal. So it is kind of nice to revisit that (memory) by being in this film.

I also had the honor of playing the Joker in one of Mr. Timm’s episodes. Mark Hamill was doing the voice at the time, but they had a flashback to the 1950s,so I got to play the Joker in one episode. That was pretty exciting, too. And now it’s nice to be in a full-scale, class production like this.

With all your years of comic book reading, and your interest in the super hero realm, do you have a character you’d most like to play or voice?

Comics actually taught me how to read. From the age of 3 or 4, my older sister would help me along with my reading lessons, telling me how to sound out words. Then I’d sit with my comics and really develop my reading. I remember that as I was reading comics, I had voices in my head for the characters. But I honestly don’t think I have one that I’d really want to take on. Maybe Bizarro Superman. That’d be fun to do.

QUESTION: You’ve carved quite the resume of film, TV and stage performances, and yet you find time for a lot of animation voiceovers. For you, is that additional work … or working fun?

It is an awful lot of fun. The only time I don’t like voiceover stuff is if I have a ton of ADR work to do. I did a film called Short Circuit II, where I had a lot of scenes with a robot. And it was a real robot – it was operated off screen, but it really was a mechanical man. And, of course, they had the motors going at all times, Every move the robot made, there would be a noise with that movement. So every scene I had with this damn robot, which was about half the film, I had to loop everything. And that drives me crazy. But when you’re working with people like Rob Paulsen and Maurice LaMarche – I did a bunch of Animaniacs and a couple of Pinky & the Brain episodes – those guys make it such a great party atmosphere. They’re so funny and so smart – just amazing people to work with. That’s the best part of the job.

QUESTION: With so many memorable roles in your lengthy list of credits, what do people stop and ask you about the most?

I guess Spinal Tap, just because we keep coming back. We made the movie 25 years ago and occasionally we “tour” and make TV appearances and put out product. So people know me from that. Occasionally somebody will come up and say “You’re Gibby from Dream On,” not very often, but sometimes. Laverne and Shirley – not so much. That’s a long time ago, and we’ve all changed (laughs). And, of course, the last few pictures I made with Chris Guest. People love Best in Show. People always say the same thing to me about that film – they say, “You know, you and your boyfriend had the best relationship of all the couples in the film.” And they’re so totally right (laughs). We were made for each other. So that’s a lot of fun, too.

QUESTION: Dr. Wolper is actually featured in both Part 1 and Part 2 of Batman: The Dark Knight Returns. Can you give us a little teaser of what to expect in the second half of the story?

The Joker is kind of Dr. Wolper’s pet patient. He is the most irredeemable, as far as society is concerned, which Dr. Wolper takes as a challenge. He’s thrilled and delighted when he sees the Joker making such progress, and he thinks that he’s done so well that the next step is to bring him out into the public to kind of show off his own work. It doesn’t go well.