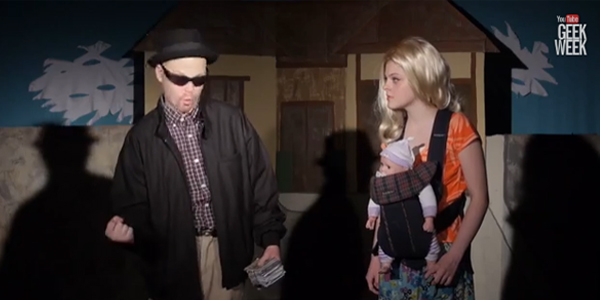 Need a refresher on Breaking Bad before the final season premiere this Sunday? Look no further.

So, hopefully you know that AMC’s seminal Breaking Bad is coming back this Sunday for its final run of eight episodes.  If you do, you’ll no doubt love the video below, which catches up on the story so far, adapted into a Middle School musical.

If you haven’t seen the show yet, well, this video will give you the major plot points to present… but you really should start Netflix-ing that bitch tonight, and powering through the episodes you missed. The show is as addictive as the blue meth Walt cooks, so even in the tight timeframe of a few days, you can power yourself through the seasons, and you’ll be glad you did.

Either way, this video is awesome– I especially like the meth being transformed into a more school-friendly rock candy, and the Cancer song at the beginning is wonderfully catchy.  Enjoy this clip, which is being released as part of YouTube’s “Geek Week.”