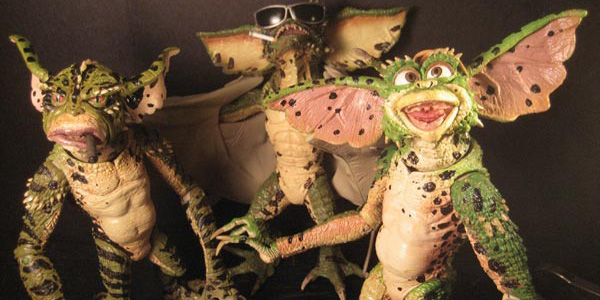 Sometimes it’s tough to keep up with every corner of the pop culture universe, and things will fall through the cracks, even though they certainly don’t deserve to. That happened with NECA’s new line of figures based on the Gremlins movies, which started hitting stores late last year. That may have been months ago, but these guys are just so cool I had to write about them!

I’ve always loved the Gremlins universe, ever since I laid eyes on the first movie when I was five. I actually wore out my VHS tape of the New Batch a few years later, and I’ve been in some heated debates about which of the two movies is superior (the answer, obviously is the Looney Tunes-inspired sequel). So suffice it to say, me and Gremlins have always been tight. NECA made a go of the franchise in toy form a few years back with a line that delivered some cool Mogwai and Gremlins, based largely on the first movie. I never did manage to scoop them all up, but with this new line NECA has really stepped up their game in regard to sculpting, detail and engineering, and they wisely opted to give us some major Gremlins never caught in plastic instead of rehashing Stripe and Spike from the get-go. The result is one heck of a toy line… and the latest Gremlins figures are absolute must-haves for any fan. 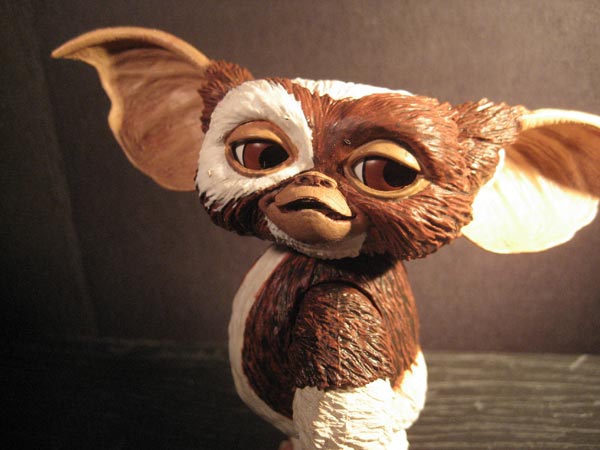 The new line is split in half, featuring Mogwai in about 3″ scale, and Gremlins measuring in at about 5.5″ tall. In the first set of Gremlins, we get three of the stars of Gremlins 2– Daffy, George and the Flasher, while the Mogwai include Gizmo, Lenny and George. In the package, the scale of the two breeds didn’t seem to mesh very well, but once I opened up Gizmo and stood him next to his second-stage tormentors, the scale between creatures looks pretty spot-on.  The sculpting on these guys is stellar across the board, just like pretty much everything NECA does. 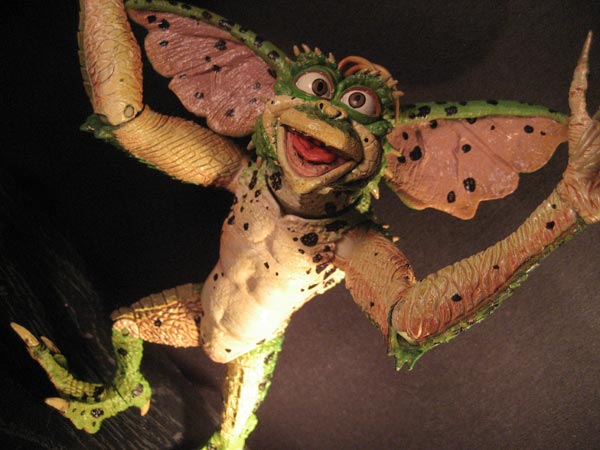 The no-good Gremlins are sculpted with plenty of scaly detail, and feature an incredible paint job that replicates their reptilian patterning, as well as adding the slimy texture they had in the movies. I was amazed to discover that all three of the new Gremlins share a decent amount of parts– we get one universal body, and identical arms and legs, so really the only unique tooling between them is the heads and hands. All three critters sport some amazing portraits, packed with all the weird personality you’d expect from these characters. Daffy and George are appropriately stylized, while The Flasher features a more generic head. It’s possible to remove the Gremlin’s trenchcoat to wind up with a “generic” creature, but half of the fun with this guy is re-creating the great scene when he shocks poor Kate. 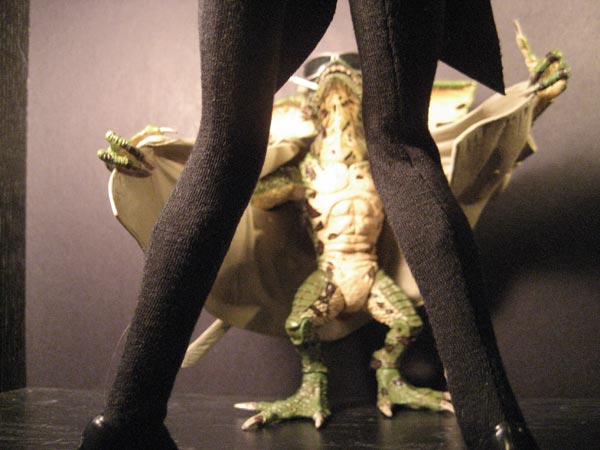 Everything down to the needle-like teeth and creepy red-tinted eyes are executed perfectly in plastic, and all three creatures look like they just walked off the screen into the real world.  The Gremlins sport a healthy amount of articulation, including a ball joint neck with a great range of motion, hinged shoulders and hips, half-ball elbows and knees, and ball-socket wrists and ankles. This allows for plenty of posing options, although the rubber trenchcoat of The Flasher kind of relegates his to one main pose… especially since the coat material is sculpted to stay spread open and can’t drape naturally, but it’s obviously worth the lack of possibility to pull off the great gag aesthetic of the figure. 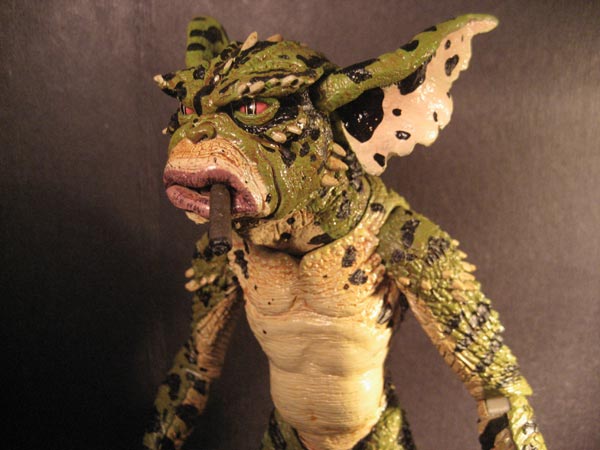 Each create also includes some very appropriate accessories. George packs his cigar, Daffy includes some Marx glasses and a party favor, and The Flasher is packing his cigarette and sunglasses. The glasses and smokes all fit incredibly well on the figures, holding in place perfectly while not over-stressing the thin material in any way. 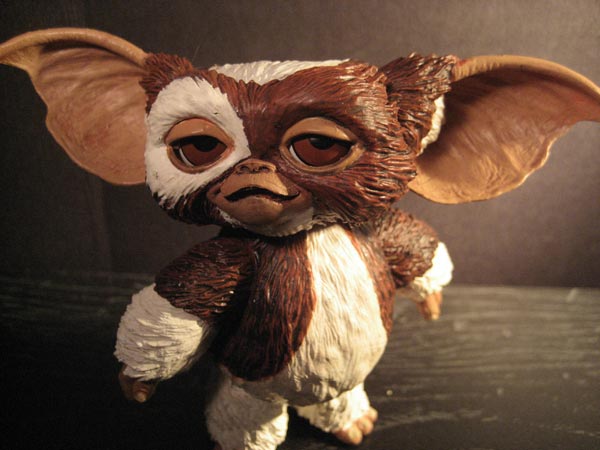 Gizmo was the easy choice for my first Mogwai, although after digging him as much as I do, I think I’ll end up all-in on these guys as well. What Gizmo lacks in stature he makes up for in equally-incredible sculpting, with some very nice fur detail and an adorable face sculpt straight out of the movie. The little guy includes a ball neck, hinges shoulders and hips, swivel wrists and ball elbows, as well as some very innovative facial articulation– the Mogwai features articulated ears, as well as a small ball on the back of the head which can rotate his eyes! It’s a very cool feature and really opens up lots of expressive options for posing the little guy. While the Mogwai lacks accessories, his detailing is just as stellar as the Gremlins, and at a price point of about five dollars less than those miscreants he’s certainly still a fair value. 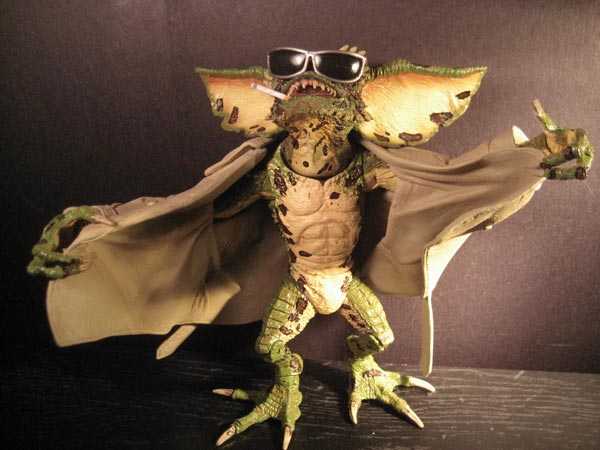 For only two movies, the Gremlins franchise is packed with lots of iconic (and very “toy-etic”) characters. I’m very glad that NECA is confident enough in this line to not just rehash new versions of previously-released A-listers, and is really going deep into the weird world of the worst of the Gremlins. Series Two is due out this Summer and promises to round out more of the main bad guys from New Batch, but the sky is really the limit with so many Mogwai and Gremlins to choose from– and if the new figures match the painstaking level of quality on display in Series One, the Gremlins could be sticking around to cause trouble for a long time!
Thanks to NECA for giving us the chance to scope out these awesome figures! 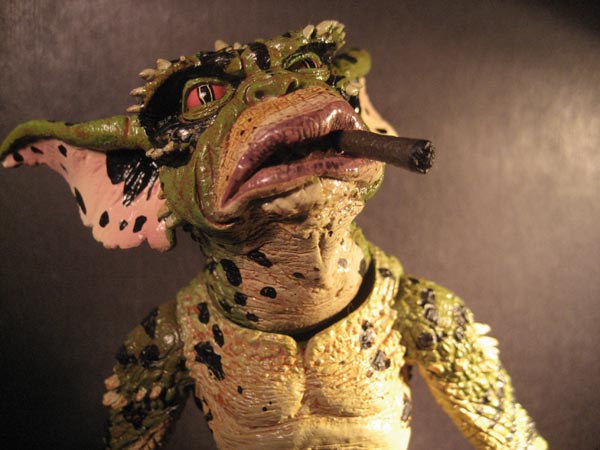 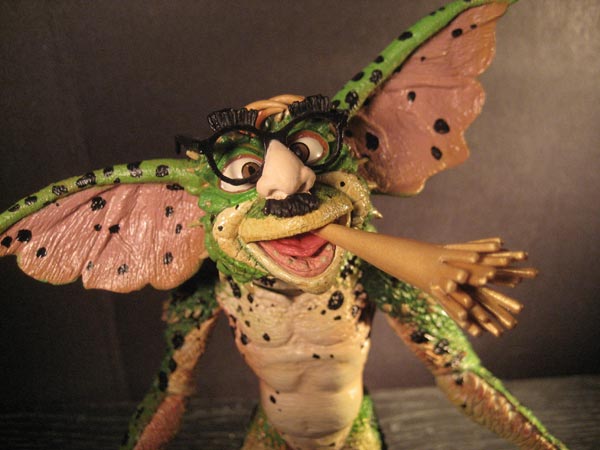 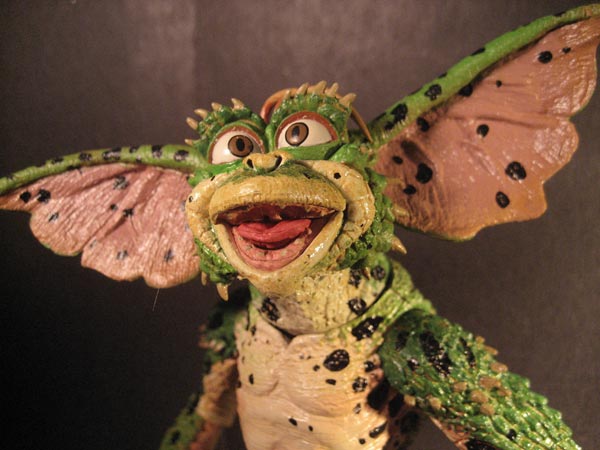 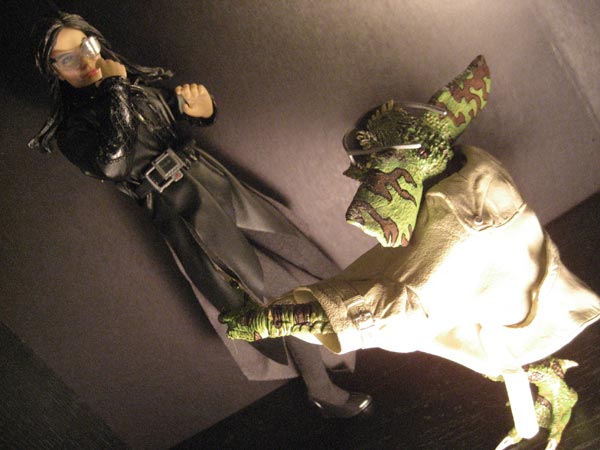 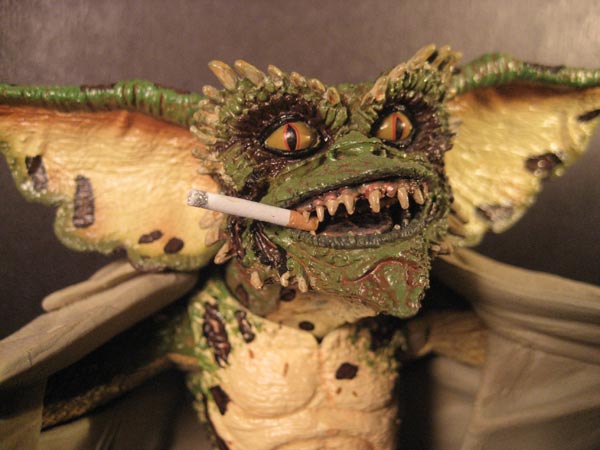 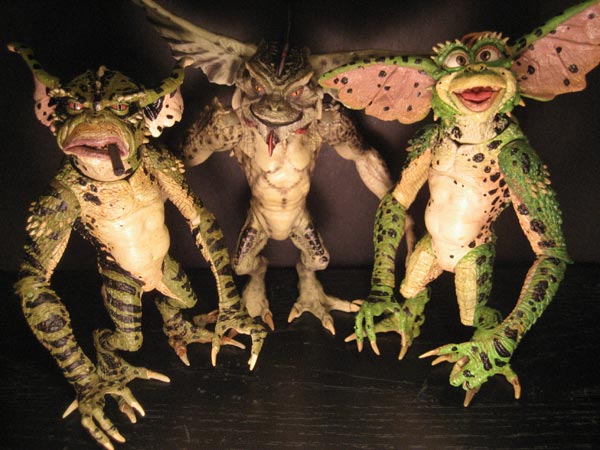 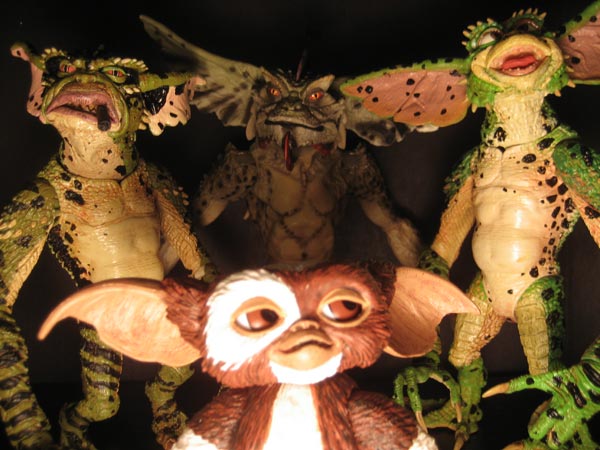