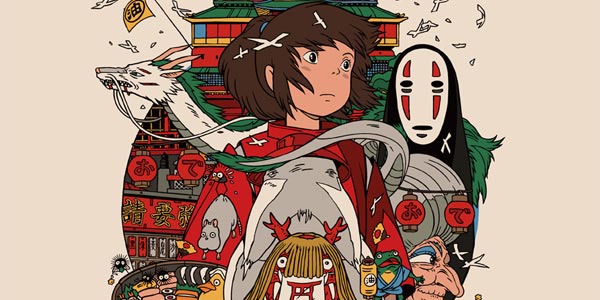 Music from five Studio Ghibli classics, released on limited edition vinyl with new album artwork makes this the most gorgeous thing you can possibly buy next week.

Apparently releasing the world’s coolest posters and prints isn’t enough for Mondo, who have just announced they will be releasing a new comp album on limited edition vinyl, which collects music from five different films by Hayao Miyazaki’s Studio Ghibli.  To make matters more awesome, each of the three editions will feature a pair of uniquely colored vinyl records beneath the beautiful album artwork by Tyler Stout.

Seriously, this is amazing.  And they’re being released the day before my birthday (hint hint)…

Here’s the full rundown, along with images of each wonderful album cover:

Mondo is thrilled to announce the limited edition vinyl release of a compilation of selections from five different Studio Ghibli films, featuring performances from the Czech Philharmonic Orchestra.  Studio Ghibli Kokyo Kyokushu will include selections from PRINCESS MONONOKE, SPIRITED AWAY, HOWL’S MOVING CASTLE, THE CAT RETURNS, & MY NEIGHBORS THE YAMADAS.  This collaboration was an especially exciting project for Mondo to be able to release this album for the first time ever on vinyl.  Studio Ghibli Kokyo Kyokushu will be available for purchase on July 26 at mondotees.com.

There will be three different collectible versions of this album, each featuring a different piece of artwork from renowned Mondo artist, Tyler Stout, capturing elements from all five films across the Gatefold 2XLP packaging. One version, showcasing HOWL’S MOVING CASTLE, a with traditional Japanese Obi and all Japanese text, will premiere at the 2013 San Diego Comic-Con. Each album will also include two different colored vinyl as followed:

Tracks 4-5 From My Neighbors The Yamadas – Classical Album

Track 6 From the film Spirited Away 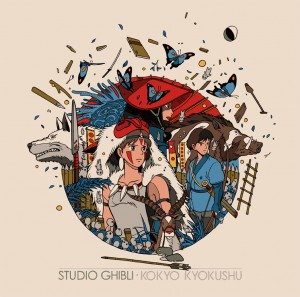 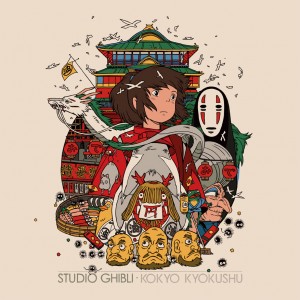 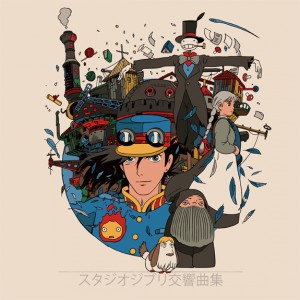