Monsters University Is A Story Worth Telling 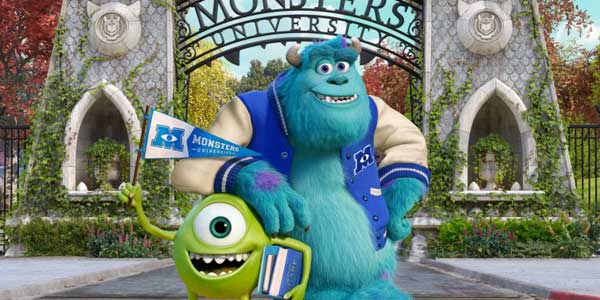 It’s no Monsters, Inc, but Pixar’s new prequel is still a solid and welcome entry in the monsters’ mythos.

We’ve definitely entered a new phase when it comes to Pixar.  The filmmakers who could do no wrong have settled into a pattern now with as many misses as hits, which has shaken some confidence in their sometimes-questionable movie plans.  A sequel to Toy Story didn’t seem like the best idea at the time, but the second installment wound up the best of the series.  A prequel to Monsters, Inc feels, on the surface, like an equally unnecessary idea, but I’m happy that the end result, while nowhere near as great as Toy Story 2, is still a solid entry into Pixar’s overall catalog.

What makes Monsters University work is its willingness to be different than its predecessor.  John Goodman’s Sully took the spotlight in the original film, so it makes sense that this time out, it’s Billy Crystal’s Mike Wazowski who serves as our protagonist, and the film offers a much more compelling look at the first film’s charming comic relief.  From a young age, Mike is inspired to become a scarer, despite his lack of natural talent to be fearsome.  Instead, he uses his intelligence and drive to study hard, learning everything there is to know about this coveted career, and winds up being accepted to the Scaring program at Monsters University, the premiere school for the next generation of great monsters.  It’s there he meets his roommate Randall Boggs, as well as lazy, entitled slacker Jimmy Sullivan, with whom Mike quickly develops a resentful rivalry.

The antagonistic relationship between these two future friends plays well, especially amidst the college movie backdrop.  The story doesn’t stray far from the college movie mold– Mike and Sully run afoul of the strict head of the school, Dean Hardscrabble (a regal and terrifying Helen Mirren), and wind up in a fraternity of loser monsters, in order to get back in good graces by winning the annual Scare Games.  It’s a very rote college movie plot, but it works in that it’s rarely more than the through line of the story.  This main plot remains unassumingly in the background, allowing for some great character moments between Mike and Sully, as well as the misfits that make up their loser frat Oozma Kappa.  Each OK member has a nice arc, although they essentially embody the archetypes of college movies (the square, older student, the shy and unassuming young kid, the bugged out stoner, etc), but the meat of the movie rightfully continues to focus on Mike and Sully.

The central theme of this movie, and the ultimate source of drama, is that Mike is simply not scary.  Sully, meanwhile, comes from a long line of legendary scarers, and skates by on his reputation and pure, natural talent, which he never bothers to understand or refine.  Sully spends the first half of the movie as a legitimate jerk, to the point that I found myself questioning how he and Mike would actually become best buddies later.  It’s a long road as the two evolve from bitter rivals to unwilling partners in their last-ditch attempt to remain in the prestigious Scaring program at the school.

Their friendship does manage to grow organically, thanks to a surprisingly consistent pace to both the stock plot and the character moments, and by the time they share their love of Scarer trading cards while gazing on what will be their future at Monsters, Incorporated, I was astounded at how realistically both of them changed as they came together as true friends.  It’s a great portrait of how friendship can comes to be, and how opposites attracting can be true in more than just romantic relationships.  It’s a joy to watch the movie’s final 30 minutes, after having missed the charming, well-drawn friendship between these two from the first movie. That same chemistry doesn’t miss a beat, as Mike and Sully bounce off each other beautifully, both as rivals and later as friends.

As the college plot reaches its close and the OK guys take on their rivals, the jerky dudes of Gamma Roar Roar in the final Scare Game, the movie pulls a fake out ending, one whose cheapness left me incredulous.  But it’s a bait and switch, leading to a real final act that goes places that feel more like classic Pixar than we’ve seen in years.  The final sequence is taut and plays very nicely with the rules established in the monsters’ universe, but it always sticks very close to our main characters, reaching a very satisfying payoff that bridges the gap to Monsters Inc nicely in terms of plot and the relationship of our dynamic duo.

The other most successful aspect of Monsters University is the controlled use of callbacks to the previous film.  Yes, we gets many nods, but it never feels like fan service– Randall gets an actual character arc here that brilliantly establishes why he is the way he is in Monsters Inc.  There is absolutely no mention of laughter as an alternate energy source here, which is great in that it doesn’t cheapen that plotline in the slightest.  Even minor cameos like Roz and Mr. Waternoose feel organic and welcome, rather than forced, and there’s a sense of charm to the wild, silly and bizarre creature designs that brought me right back into this wonderful world.

In many ways, Monsters University feels like the anti-Incredibles.  While that movie looked at how to live in a world with the knowledge that you are something more, this film’s central theme is a more populist one– how do you excel at your dream when you’re just not good at it?  Sometimes the answer is to change the game, an action both our heroes take during the excellent final act of the movie, to very different effects.  Monsters University may not be as thematically rich as some of Pixar’s classics, and the through line for the story seems intentionally generic and predictable… but it all builds to a final act that ties everything together perfectly. It paves the way to the original classic, never losing sight of the importance of the main bond between our two best friends.  It’s cute and charming, well paced, and Monsters University feels like a chapter that earns its place in this monstrous universe, and in Pixar’s overall filmography.