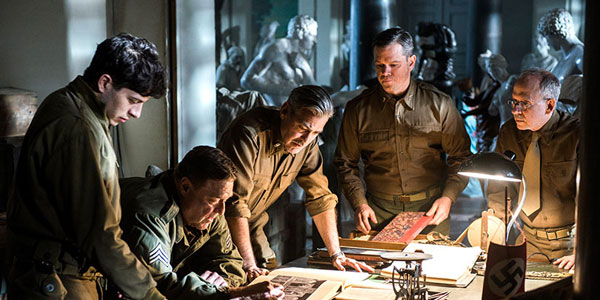 Get a first look at one of the must-see movies of the Fall.

The Monuments Men sold me easily.  I adore World War II movies, and men on a mission movies… and this one is just so unique– the tale is based on the real events of a team of arts and culture experts who embark on an Allies sanctioned mission to save the priceless works of art amidst the battle-torn Europe under siege by Hitler’s Nazis. That’s a hell of a starting point for a movie!

On top of that, the squad of culture champions will be played by the definition of all stars– George Clooney, Matt Damon, Bill Murray, John Goodman, Bob Balaban, Cate Blanchett… this would be a mind bogglingly amazing cast, even without such an intriguing concept.

Now, the hat trick comes in the form of our first trailer, which delivers on both the cool concept and certified talent this movie promises… Check it out below, and I’m pretty sure you’ll agree pretty quickly that this is one to watch out for when it hits theaters this December.