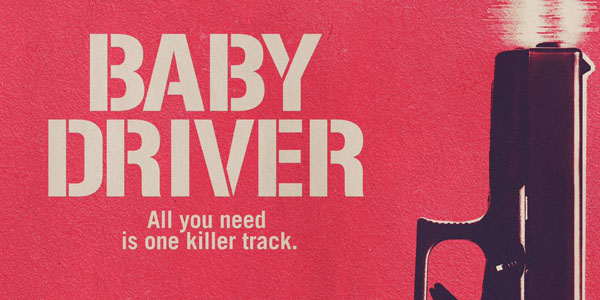 Baby Driver is a heist film that takes the focus off of the heist and puts it in to the seat of the getaway car.  The main character, Baby (played by Ansel Elgort) is essentially a superhero in everything but name.  His parents are killed in a tragic accident that coincidentally gave him his “powers” and motivated everything he did from that point on.  Baby is indebted to a mob heavy and criminal mastermind named Doc (played by Kevin Spacey) and drives Doc’s team as the getaway on a series of daring heists.  Doc’s team is a revolving door of criminals, Griff (played by Jon Bernthal), Buddy (played by Jon Hamm), Darling (played by Eiza González), Eddie (played by Flea), JD (played by Lanny Joon), and the show-stealing Bats (played by Jamie Foxx.) All the while, Baby tries to care for his elderly and deaf foster father, Joseph (played by CJ Jones) and court newfound friend and romantic-interest Debora (played by Lily James).

Edgar Wright’s Baby Driver is a song and a beat you can tap your feet to.  Even the direction has a fascinating relationship with the music, as simple things like coffee being put down, windshield wipers, and money counting connects with the BGM giving the world itself a sense of rhythm.  Just like Baby uses music in order to weave in and out of traffic, the audience understands how Wright uses music to construct a scene.  We’ve seen this to lesser extents in Shaun of the Dead, Hot Fuzz, and Scott Pilgrim VS The World, but this is by far the most complete example of this snappy rhythmic directorial style that Wright’s become known for.  Ansel Elgort really becomes baby, but he acts as the antithesis of the getaway driver that you’d usually see in a movie like this (as noted by his outfit being a higher contrast and less heavy version of that of The Driver’s from Drive).  I also want to note that everyone here does an amazing job with special mention going to Jon Hamm as the complex criminal Buddy and Jamie Foxx as the loose-cannon Bats; but it’s Baby or rather Baby’s perspective, that makes them intriguing.  Everyone chimes in on how out of place Baby really is, confirming what we already know to be true, and their reactions to this young kid being practically a superhero in a heist movie is what helps define their characters beyond the broad strokes.  The movie has an interesting gimmick, where while a heist is going on, the audience stays with Baby.  We’re never privy to the mechanics of the robberies, because they don’t actually matter.  The getaway, however, is absolutely everything, and that regard the movie’s rhythmic style is at its absolute best.  The scene construction plays out just like a song, with everything falling in to place, and watching Baby find that rhythm and use it in order to make impossible moves makes his “powers” far more feasible to us than Superman flying, or Spider-Man slinging a web.

I should probably touch on the romance.  It’s a driving force the movie, and it has its own rhythm to it, but it just can’t compare to the criminal aspects.  There’s such a varied and talented cast of characters in those scenes, and Lily James brings charm and innocence to the story; but her purity as a character makes her far less complex in comparison and by extension less interesting.

Regardless, Baby Driver is a romance in both senses of the word; it’s highly stylized as well as being sweet.  The soundtrack is Guardians of the Galaxy level memorable, and Edgar Wright uses it as the foundation of an unconventional heist movie with a clear sense of timing and rhythm.  I would highly recommend this movie to anyone who’s a fan of Wright’s past movies, action comedy in general, or Fast and the Furious fans.  Cool car chases, awesome tunes, and a classy and modern love story; Baby Driver plays many different instruments just like a pro.