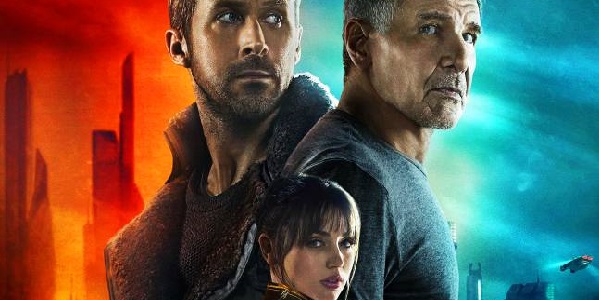 God that was long! I know this is a weird place to start a review of a movie already getting so much praise, but Blade Runner 2049 is nearly three hours! You know how many episodes of Seinfeld that is!? Now that that’s out of the way…

Blade Runner 2049 takes place thirty years after the original and centers around the Los Angeles based Blade Runner, K (Ryan Gosling.) on a mission to eliminate a rogue replicant named Sapper Morton (Dave Bautista.) While on the job, he makes an earth-shattering discovery that threatens the status quo in a way that his superiors are not ready to allow. As a result, K is tasked with a new job, with an even more grim function than before. In order to complete the job K searches for the retired Blade Runner, Rick Deckard (Harrison Ford,) in order to unlock the secrets buried in the past with the power to change the future. Along the way, he is put at odds with the newly reborn Tyrell Corporation and the mysterious CEO and genius that runs it, Niander Wallace (Jared Leto) and his sadistic attack replicant, Luv (Sylvia Hoeks.) I am butchering the story synopsis, by the 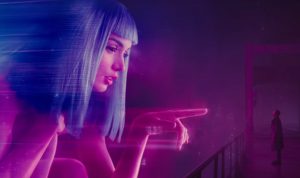 way, because that’s the best way to give you a rundown of this film without giving anything away. The movie twists in so many different directions, that no storyline or arc ends up being as simple as it was when it started out.

Blade Runner 2049 is not a passive enjoyment sci-fi film. All three hours are packed with content, so even when the film looks like it’s just meandering, it’s revealing a new piece of the puzzle or building on the world in a way that makes the setting more clearly understood. The only thing is it’s not the kind of film you can just sit back, tune out, and revel in. In order to get the most out of it, the audience has to not only pay attention but analyze the narrative as it is unpacked. No plot detail or device is wasted, but some moments have such a subtle effect that it can be all too easy to write off as excess. The visuals are arresting though, so it’s not like there’s a fear of boredom. This is a technical masterpiece that dips only occasionally into the uncanny valley (which is an incredible feat for a sci-fi film.) The world really feels like it has evolved from the 1982 original, but Denis Villeneuve is not Ridley Scott, and his vision of the world of “Blade Runner advanced” is much more vibrant and with a vast color pallet to showcase the soul of each location and moment. As such, I would even go so far as to say that Blade Runner 2049 could not actually be considered a Noir, unlike its predecessor.

Ryan Gosling as K delivers a surprisingly reserved performance through the majority of the film. The decision to keep K stoic ends up being a genius move because even the slightest hint of emotion feels that much more powerful as a result. K’s story is so many different things at once that it’s hard to nail down where it sits thematically. It’s not your typical hero story, nor is it that of an antihero. Because of K’s circumstances, his arc is 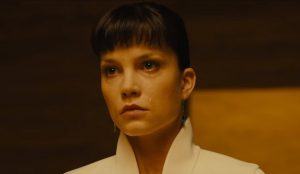 complicated. His desires, goals, and methods are in constant flux as the events around him change his perspective in ways that are easy to empathize with and understand as he evolves. His relationship with his AI companion Joi (Ana de Armas) is brilliantly realized and blends a constant stream of both romance and tragedy in to his story, never failing to account for the sad reality behind Joi’s connection to K. It’s such a bittersweet aspect of Blade Runner 2049, and is a major asset to making K such a sympathetic character. While Jared Leto’s Wallace is the marquee villain, I was more drawn to Sylvia Hoeks as Luv (kind of an evil Rachel.) Wallace’s screentime, as well as his direct impact on the story, is minimal, but it only serves to bolster the pedestal his villain sits on. Luv, on the other hand, is deadly, darkly funny at times, and emotionally complex. I believe it’d be fair to say she acts as K’s primary antagonist throughout the film, and she is such an accomplished adversary that I found myself saying “Oh yeah, Jared Leto’s in this too. I forgot” more than a few times.

Finally, of course, we have to talk about Rick Deckard (Harrison Ford.) Ford doesn’t exactly ooze Rick Deckard in this latest portrayal of the iconic character. This is mostly due to the setting though, which is why I had to touch on the fact that I don’t consider Blade Runner 2049 a Noir. Without the Noir, it’s hard to nail down exactly what Deckard is. He comes in sometime in the last forty-five minutes, and his introduction introduces a few of 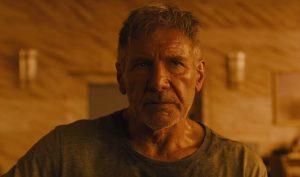 the best plot-points and twists of the film. The Deckard that audiences know though, is not the Deckard we see, and I don’t mean that figuratively. I mean that Deckard has changed in thirty years, and the motivation that drove him right after the events of Blade Runner is so far removed from now that it’s hard to connect that past and this present together. The revelations that come from Deckard’s part in this story do give new insight into the events of the original film. The motivations of minor players and behind the scenes characters in the 2019 part of the story are made more clear and as a result, both films are made to seem more complete. Sadly it’s only the romantic angles of Blade Runner that impact 2049, and personally, that wasn’t what I was paying attention to in the original (I was paying attention to Rutger Hauer’s sweet bike shorts.)

Final Word: Blade Runner 2049 is a marvel, but it’s not for everyone. On top of having to have seen the original to get the most out of it, it’s also recommended to watch the three short films that were released prior to the theatrical debut. Then you have to contend with the nearly three-hour runtime and the slow-moving and subtle story that requires constant attention. As for the positive, there’re so many different ways this story goes that I was constantly engaged and Ryan Gosling’s K remains in perfect sync with it. Which is equally impressive when you consider how frequently his situation changes. The visuals are breathtaking, and the ways that the story fuses the aspects of K’s difficult life with the resources of the high-tech world he lives in are brought front and center by the subtle loneliness in his scenes with Joi. Seriously, this idea of real(ish) guy/fake girl is a constant sci-fi trope at this point, but I don’t know if even “Her” was able to utilize this concept as effectively as Blade Runner 2049 does.

In my opinion, Blade Runner 2049 is excellent and should be experienced in the theater because the visuals are just that impressive; but popcorn sci-fi it’s not.