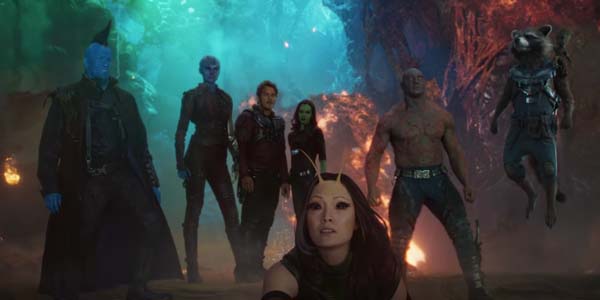 Did you see the sequel everyone was talking about this weekend?

Here’s the thing about doing something different…again.  You’ve already done it, so it’s no longer different.  Back in 2014, Guardians of the Galaxy filled a hole that no one knew was there, so needless to say the film didn’t stand a chance of matching that rush that can only come from something shiny and new.  Instead it’s been replaced by pure uncut American hype; product tie-ins, merchandising, and advertisements (Oh, the advertisements…seriously, just go to the imdb page for the movie.  I’ll wait.). But under all that is still a sincerity that a lot of films of this caliber can’t even fake, and whether or not the sequel is as good as the original is a question that Guardians Vol. 2 makes unnecessary pretty much immediately when you consider what the actual purpose of a sequel is.  Expand on what was already there, don’t try to fix problems that aren’t (George!)

Guardians of the Galaxy Vol. 2 picks up a short time after the original, with the Guardians engaging in a little good, a little bad, and a whole lot of ass-kicking.  After an unfortunate encounter with Ayesha, the High Priestess of a highly uptight race of golden humanoids known as the Sovereign, the Guardians find themselves on the run, with no possibility of escape, when they are unceremoniously rescued by a strange craft.  Events transpire which cause them to crash land on a nearby planet where the operator of the craft reveals himself to be Peter’s father, Ego (Kurt Russell).  And that is all I will say about the actual plot.  Whereas the original followed Star Lord exclusively and was essentially his story, aside from villainous exposition scenes, Guardians Vol. 2 makes the whole team the main character and splits their arcs and interactions evenly enough to give both emotional and narrative payoffs no matter who your favorite Guardians character is (well…the ones that returned for this movie anyway.) Favorites returning to the franchise amount to Karen Gillan as Nebula, Sean Gunn as Kraglin, and Michael Rooker as Yondu.  The total top billed cast this time is significantly smaller, a fact clearly understood by Gunn and Co. as a minor plot-point revolves around an army that isn’t even technically there.  This minimalism in players seems to be intentional as the story zeroes in on key relationships between its small cast of characters, giving characterization priority over plot development.

That’s Guardians Vol. 2’s greatest asset; expanding on already great characters.  More revealed about Rocket and Yondu through their interactions, Ego and Peter learning and revealing information about each other, Gamora and Nebula attempting to clarify their relationship without being under Thanos’ thumb, and Drax helping newcomer Mantis (Pom Klementieff) find her identity apart from her connection to Ego.  Meanwhile, in the background (much like the opening credits of the film) the plot seems to occur with very little incitement from the main characters.  They simply exist within a stream of events barely in their control.  With no one person delegated to pushing the story forward, everyone is free to just play off each other, crack-wise, and engage in small scale action.  I want to point this out, so it’s fully understood.  This shouldn’t work.  There is almost always one semi-boring character dedicated to a constant that keeps things chugging along.  They’re typically called the hero.  Guardians of the Galaxy Vol.2 has no heroes because it doesn’t need them; just friends talking, shooting, making fun of each other, and occasionally saving each others’ lives.  Rest assured though when the fit hits the shan (as fit is wont to do) the movie doesn’t skimp on the big showy grand gestures to fans of comic book films.  In fact, this one went way farther in to the Marvel Comics boonies than even I expected it to go, and it still managed to present accurate and yet semi-realistic depictions of some very weird Marvel comics concepts and characters (embracing weirdness to present a functioning alien-inhabited universe…how is this a foreign concept to other films?)

Final Word: I enjoyed Guardians of the Galaxy Vol. 2 even more than I enjoyed the original because without the shrink-wrapping on the first one, this one was more about the characters.  The team as surrogate family thing has been done to death, but Guardians Vol. 2 moved me multiple times because there isn’t a single weak or poorly developed and portrayed character among them.  Gunn, his team, and his cast love the Guardians of the Galaxy and that effortless chemistry that can only come from genuine passion translates in to the sum of their work.  Revealing different parts of a character as their environment and interactions change is the very definition of character development, and it is what makes Guardians Vol.2 such an natural ride.  Gunn puts the plot on auto-pilot, which means that a lot of it comes in large hard to swallow chunks, but the tradeoff ends up being fully realized arcs for all the characters, complete with smart and funny jokes, references, and deep probing into character’s psyches and actions.  Honestly, I thought it was a steal.  No one steals the show this time around, and Baby Groot’s pretty much delegated to mascot.  An adorable and highly charismatic mascot, but a mascot nonetheless.  Ego, Mantis, and Ayesha make for natural and delightfully strange additions to the Guardians of the Galaxy canon, with many promising possibilities in the future.  The flaws, while small, were still enough to take me out of the film a handful of times.  The sentimentality sometimes goes in to sugary cereal territory resulting in an uncomfortable pandering feeling, and the music cues (while much more connected by the narrative rather than being BGM) bring everything to a grinding halt multiple times.  What follows is a big action sequence to a kick-ass soundtrack though, so I can’t fault the movie too much for announcing when something really cool was about to happen.

While smaller in scale, and more intimate than it’s predecessor, Guardians of the Galaxy Vol. 2 is fun, thoughtful, thrilling, and sweet.  It’s every bit the big, colorful, and weird explosion of a film that first was, with even more to say about its complex and likable characters.  Special care was taken in to leaving no Guardian behind from a narrative perspective.  And if that doesn’t sell you, Kurt Russell riding a spaceship.  Seriously…with reins and everything.