Movie Korner: From Up on Poppy Hill Blu-Ray Review 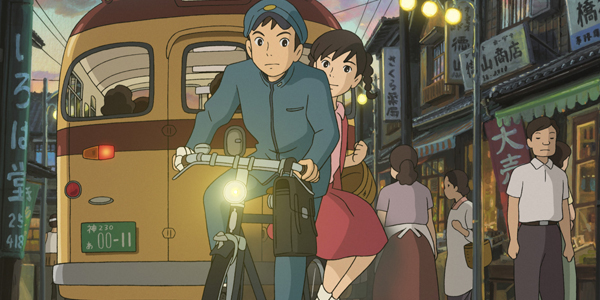 No other film studio, whether they produce animated or live-action movies, can come close to matching the cinematic experience that Studio Ghibli delivers or their bridled consistency – not only in unfailingly producing brilliant, heartfelt films time and time again, but still doing so using virtually one-hundred percent hand-drawn animation.  On September 3rd, domestic audiences will finally be able to own their recent masterpiece, From Up on Poppy Hill, on Blu-Ray and DVD courtesy of GKids and Cinedigm. 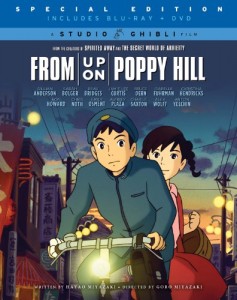 Written by the imitable studio founder Hayao Miyazaki and directed by his son, Goro Miyazaki, this film marks their first feature-length collaboration.  In some ways it’s also an interesting departure from the style and tone of the Studio’s previous work.  You’ll find no supernatural beings, magic, or monsters woven into this decidedly realistic coming-of-age tale, while it retains the patient storytelling, charming aesthetic, dynamic characters, and air of overwhelming optimism that seem to span all of their pictures.

From Up on Poppy Hill is set in Yokohama as Japan prepares to host the 1964 Summer Olympics.  Umi Matsuzaki, who lost her father as a casualty of the Korean War, lives in her Grandmother’s oceanside home along with her siblings and girls they are boarding as her mother studies abroad.  Viewers quickly meet all the home’s inhabitants one-by-one in a bustling, quirky breakfast scene that plays out like a roll-call before the set shifts to the home’s serene courtyard area.  Here, among the beautiful foliage and the ambient sound of crashing waves, Umi ritualistically raises signal flags every morning from a flagpole overlooking the sea.  Sequences such as this play out several times over the course of the film and, given the weight they end up holding in the narrative, are handled with such delicate grace.  Predominantly red, yellow, and white square flags regularly contrast against a soft blue sky and the lush green plant life around the home.

That afternoon, at school, the audience becomes acquainted with one of Umi’s classmates, Shun Kazama, as he attempts a death-defying stunt to bring attention to a problem plaguing the Latin Quarter, a dilapidated old building that houses many of the male students’ clubs and the school newspaper office.  The building is in danger of being torn down by school officials as part of an ongoing country-wide effort to beautify Japan for the coming Olympic Games, but many of the students wish to preserve the historic structure and the connections they have to it.  This backdrop is an allegory for the themes that run throughout the film – coming to terms with the grief of the past while holding onto hope for the future, as well the importance of knowing who you are and how the events of your life have shaped you.  It’s a very nostalgic affair that gives way to heart-wrenching remembrance, emotional revelations, and adorable conversations. 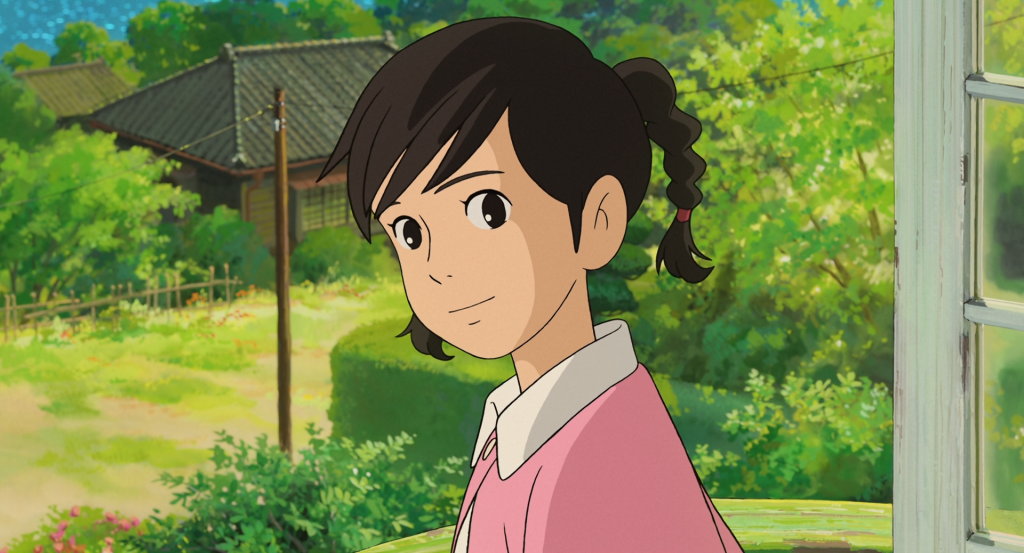 Umi and Shun connect over a common interest in the refurbishment of the ramshackle clubhouse until an unexpected family matter complicates their relationship and their lives, setting the two off in search of answers concerning their past, as well as formulating solutions to keep the Latin Quarter, and the history they share with it, alive.  In the hands of a less skilled creative team, From Up on Poppy Hill could have been rather lifeless, but the Miyazakis have constructed an experience that kept me wide-eyed and smiling throughout.  This is largely because, like the great Akira Kurosawa, they possess an uncanny ability to write and direct characters that capture the audience’s interest instantaneously and to create worlds that absorb the viewer entirely.  This may be even more of an accomplishment here, as it’s done without the over-the-top visual eccentricity found in the likes of Princess Mononoke, or Spirited Away, relying instead on the subtle nuances of daily life and the restrained thrill of truly connecting with other people. 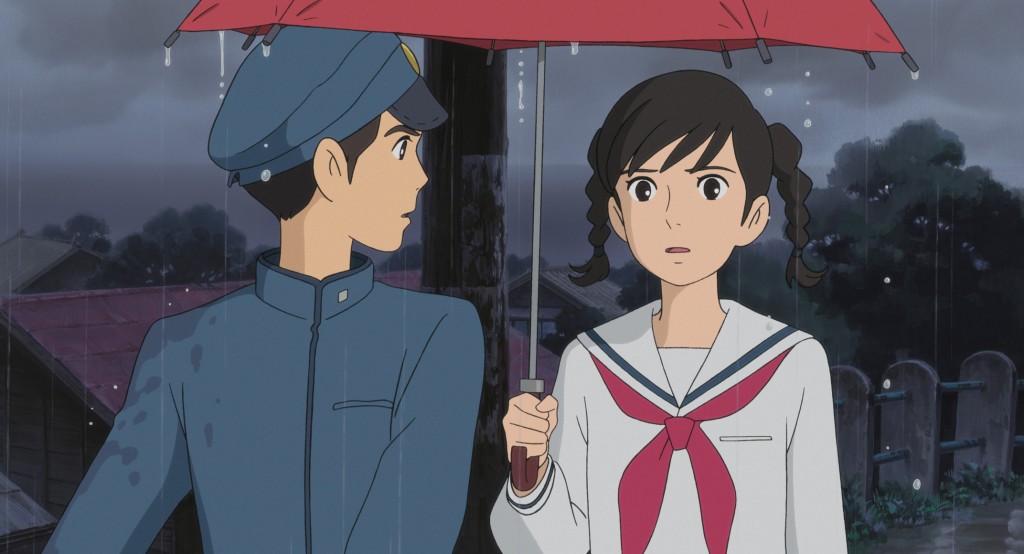 The Blu-Ray & DVD transfers are flawless (the BD offers an AVC encoded 1080p presentation), with one of the cleanest presentations a cinephile could hope for and colors that practically explode off the screen.  The painted backgrounds come through with such a vivid authenticity; you feel like you could practically reach out and feel the texture.  The Latin Quarter clubhouse was one of the most impressive set pieces, littered with books and hundreds of small objects that had accumulated over its lifetime, its presentation was lovingly executed and made the building into a character in and of itself.  Likewise, the audio quality is amazing with a lot of activity in the surround channels.  Even while only offering 5.0 mixes of both English and Japanese (eliminating the subwoofer from the mix), I didn’t feel the audio suffered from any lack of low end frequencies – actually it was surprisingly well-balanced and enjoyable.  With a soundtrack that features as much upbeat piano as this does, each key sounds clear as a bell, with no distortion, ringing, or unwanted brassiness to the sound.  The dynamic range is fairly consistent here and the ever-present ambient sound, whether from noisy traffic, the swirling ocean, rolling thunder, or the non-stop chatter that echoes within the Latin Quarter imperceptibly fills the room, immersing you in the atmosphere.  The rear surround channels, which I feel often get neglected, are also used remarkably well as dialogue from off-screen characters is often heard faintly through rear channels depending on their distance from the “camera” — and even on-screen action like the tires of Shun bicycle sliding across dirt and cobblestone accurately tracks back and forth in the mix to follow his movements.  The Japanese voice track is (obviously) top notch but the English language dubs are usually commendable on Studio Ghibli’s domestic releases and this one is no different.  Sarah Bolger and Anton Yelchin give great performances as Umi and Shun respectively, with the likes of Gillian Anderson, Christina Hendricks, Aubrey Plaza, Jamie Lee Curtis, Bruce Dem, and Ron Howard lending their talent as well. 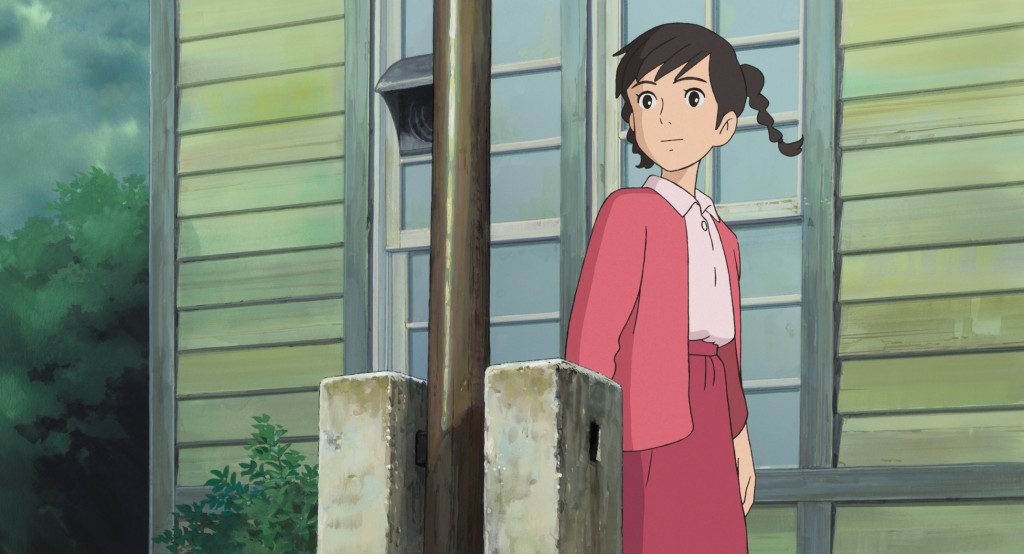 Both the Blu-Ray combo pack and the DVD releases of From Up on Poppy Hill contain over three hours of extras, including feature-length storyboards, behind-the-scenes interviews and featurettes, a music video for the film’s theme song, and a feature about the history of the sea-side city of Yokohama.  Only in the blu-ray edition you’ll find a bonus staff speech and press conference held by Hayao Miyazaki shortly after the Fukushima earthquake and a 20-page booklet containing the original project proposal by Hayao Miyazaki with a letter from Goro Miyazaki.

Much like the way the film begins, it eases into its ending in a similarly delicate fashion, reminding viewers to find solace in the small things in life that bring you happiness and which can have far-reaching effects on the world around you.  Studio Ghibli seems like the only creative studio still able to produce children’s cinema of this level of beauty and refinement; films that don’t insult young viewers’ intelligence while offering valid life lessons within an overwhelmingly positive and emotional story.  While I missed this on its theatrical run, I find viewing a movie such as From Up on Poppy Hill in your cozy home with friends or loved ones is the perfect setting to experience such an intimate piece.  Do yourself a favor and grab this one up when it hits shelves on Tuesday, September 3rd. 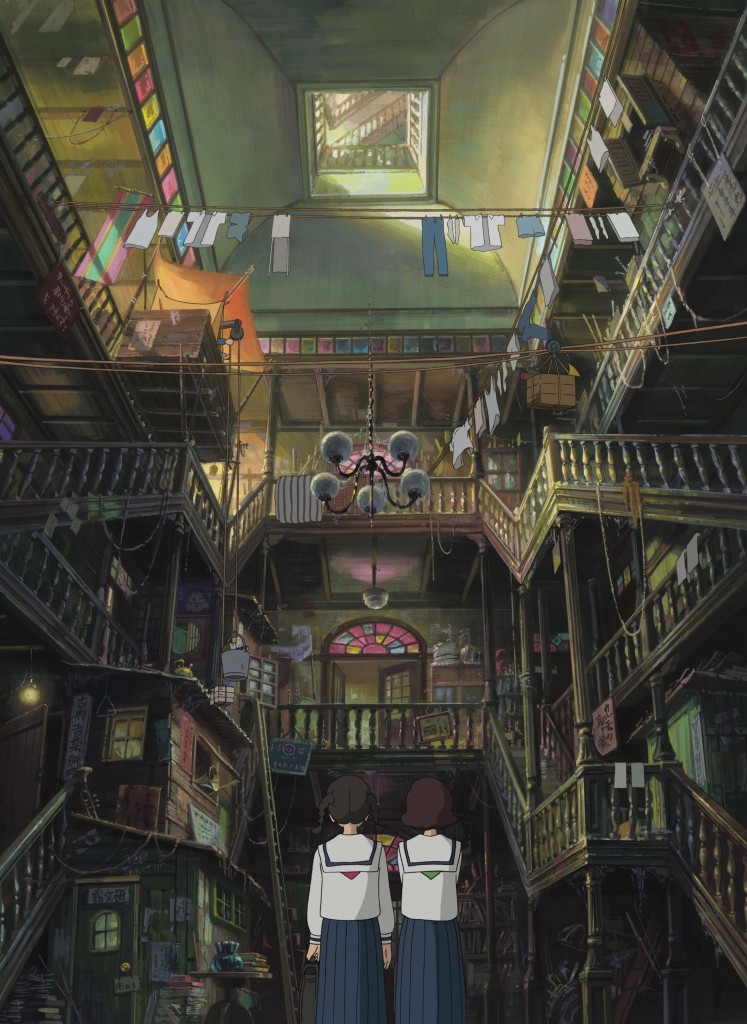 About GKIDS
GKIDS is a distributor of award-winning filmed entertainment specializing in animation for both adult and family audiences. The company has scored three Best Animated Feature Oscar nominations, with The Secret of Kells in 2010 and both A Cat in Parisand Chico & Rita in 2012 – marking the first time an independent distributor has had two simultaneous nominations in the category. Current and upcoming releases include Studio Ghibli‘s From Up On Poppy Hill, Jean Francoise Laguionie’s The Painting, as well as the animated Oscar-contender Ernest & Celestine, from director Benjamin Renner and producers Les Armateurs. GKIDS also handles North American theatrical distribution for Oscar-winner Hayao Miyazaki‘s famed Studio Ghiblilibrary of films, one of the world’s most coveted animation collections with titles Spirited Away, My Neighbor Totoro, Princess Mononoke and others. GKIDS is producer of the New York Int’l Children’s Film Festival, an Oscar-qualifying event and North America’s largest festival of film for children and teens.

About CINEDIGM
Over the past decade, Cinedigm has led the digital distribution revolution that continues to transform the media landscape. In addition to its pioneering role in transitioning movie theatres from traditional film prints to digital distribution, Cinedigm continues to advance worldwide cinema modernization with its suite of software products allowing exhibitors and distributors to manage their newly digital businesses with efficiency, insight and certainty. And, as the leading distributor of independent content in the world, Cinedigm collaborates with producers and the exhibition community with unequalled transparency to market, source, curate and distribute quality content across all digital platforms to targeted and profitable audiences. The company’s library of over 5,000 titles includes award-winning documentaries from Docurama Films®, next-gen indies from Flatiron Film Company® and acclaimed independent films and festival picks through partnerships with the Sundance Institute and Tribeca Film. Cinedigm is proud to distribute many Oscar®-nominated films including THE INVISIBLE WAR, HELL AND BACK AGAIN, GASLAND, WASTE LAND and PARADISE LOST 3: PURGATORY.