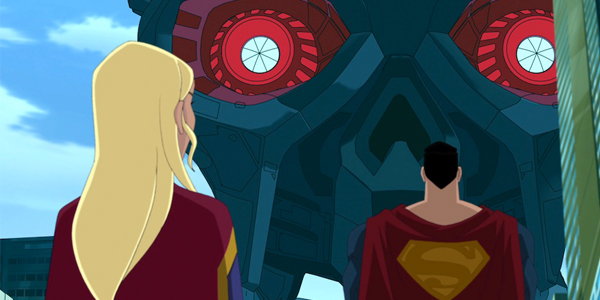 The film is based on the story arc by Geoff Johns that reintroduced Brainiac to the DC universe. Over the years Brainiac has gone through a metamorphosis changing his form with each new age of comic history. He started off as a humanoid, changed into a purely robotic being, and now in this film is a mix of the two. The main story revolves around superman and Supergirl discovering that Brainiac is out in the universe with a bottled Kryptioan city. Supergirl fills Superman in on what happened to Kandor before Krypton exploded leading to the escape of the cousins. Brainiac in this version comes off as a Borg-like creature, absorbing the knowledge of a civilization then it to halt any further progress. His only purpose is to acquire all knowledge in the universe. 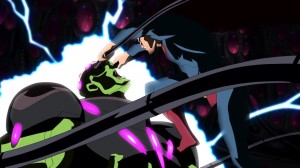 The story line is well paced, but misses all the details from the comic story. These adaptations of story arcs are made in a vacuum ignoring all that came before and all that comes after. This was a middle point in the Superman world between the release of Zod on Earth and the rise of New Krypton. Excluding those story points can make this film feel incomplete for a comic fan. While it wraps everything in a nice bow for new viewers it may alienate long time readers.

The art style is bright and clean, as expected with a superman story, but there are small issues with the overall look of the characters. The style seems to draw some inspiration from the 200x Masters of the universe cartoon thanks to the character designs and color pallet. 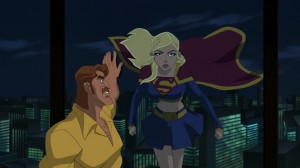 The voice actors really elevate an okay movie to a fun watch. Mathew Bomer provides a great performance as both Clark and Superman. He is able to change the tone of his voice for each of the roles making you forget at time who is behind the Man of Steel. I still contend he could have made an amazing live action Superman, but fans will have to settle for him behind the animation. John Noble also provides a great depth to Brainiac. His voice is calming and smooth, but also has a very spooky feeling to it. Stana Katic delivers a great performance as Lois Lane. She has the confidence and toughness that makes Lois come alive on the screen.

The extra on the DVD are standard to the other DCAU features. There are classic Superman the Animated Series episodes on the disc, as well as a preview of the next feature Flashpoint.There are also featurettes on Brainiac’s history and the history of Kandor. Both give new viewers a history lesson on the main points in the main film. It also gives a look at some of the origins of the modern version from creator Geoff Johns. There is also a film makers commentary which is very interesting to listen to along with the film. It gives some insight on the changes made to the story, and little facts about the opening sequence and the second ending.

Overall this is one of the better films in the DCAU to date. If you have a chance to pick this up, the commentary on the Blu-ray is interesting enough to make it worth the added cost.