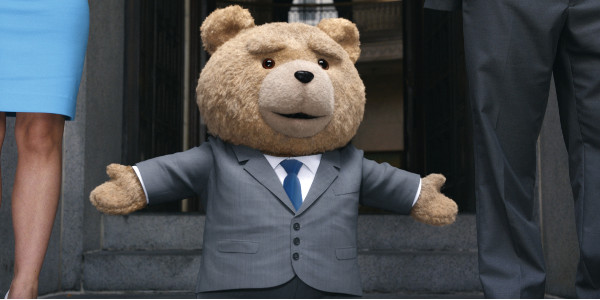 I was late to the party when Ted first came out, but I thought it was hilarious. Now Ted 2 is out, and Seth MacFarlane has totally able to top himself.

The movie opens with Ted getting married to his girlfriend Tami-Lynn. From there, there’s a series of events where Ted is not considered a person, but property. Ted and his best pal John hire lawyer Samantha to prove that Ted should be considered a person, regardless of the fact he’s a teddy bear.

I swear I honestly can’t remember the last time I laughed so hard. I will admit that at times the film seemed like an episode Family Guy, but I didn’t mind it. Ted 2 just hit the ground running with the jokes and didn’t stop with them.

Seth MacFarlane and Mark Wahlberg are just incredible in reprising their roles as Ted and John. The back and forth between them is very natural. It just works on screen.

The comedy in this film is definitely not for the faint of heart. If you’re too uptight, then this film isn’t for you. You need be able to have a good laugh

With all the summer over the top action films, Ted 2 is a film that’s seriously needed. Go out and see it. Just remember to have a good laugh.