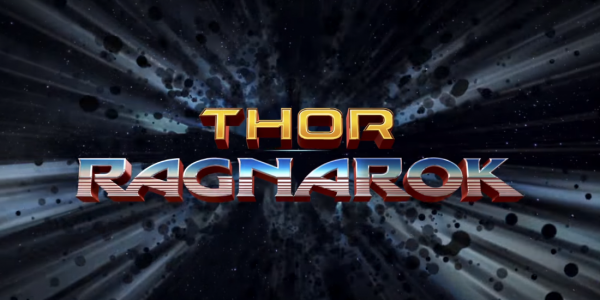 Thor: Ragnarok is Guardians of the Galaxy funny, with the visual style of the cover art of every heavy metal album of the last thirty years.

Thor: Ragnarok starts off with a big fun and flashy action sequence, and mixes in some irreverent humor all before it even hits the opening titles.  It was immediately clear what kind of movie it was going to be, so no surprise that it maintains one or the other through the whole film.  After his latest victory, he returns to Asgard where Loki has been masquerading as Odin and ruling the kingdom (badly.) It’s revealed then that a very special set of circumstances have been fulfilled, resulting in the return of the imprisoned Goddess of Death, Hela.  After basically trouncing Loki and Thor, Hela makes her way to Asgard to fulfill her destiny.  Meanwhile, Thor ends up on a mysterious planet Sakarr where he is captured by a drunken scrapper and taken to the

Grandmaster to fight in a series of gladiatorial battles.  Thor’s only goal is to escape Sakarr and stop Hela, preventing Ragnarok, but he can’ do it alone.  He’s going to need any help he can get.

It’s all so weird.  That’s not a criticism.  On the contrary, I’d consider it a compliment.  The Thor movies have always struggled to find the right balance between realism and absurdity, and I think part of that had to do with the fact that everything needed to be equated to and centered on Earth.  Guardians came along and changed all that though, and as a result, Thor: Ragnarok has the guts to be an insane clash of Norse mythology, junk science-fiction, and comedy.  Taika Waititi’s previous notable credit was the New Zealand Horror/Comedy cult hit, What We Do In the Shadows, which is clearly the James Gunn influence of hiring a fresh and funny director and giving them a technical toybox to play with.  Thor: Ragnarok is always charming and funny, so not even the stakes are easy to take seriously.  There’s a lot of marquee death in this one, and yet because the movie is so lighthearted and goofy, it pretty much never matters.  There’s so much happening and yet none of it seems to have any real punch.  It’s a tapdance.  I was plenty entertained but only somewhat invested.

Every single character seems to be a joke, and for the most part, it works well that way.  Thor’s less severe (by less I mean not at all) than he previously has been and those naive and cocky moments from before are replaced with simple sarcasm and slapstick.  Chris Hemsworth has a hell of a presence and impressive comedic chops though, so this new version of Thor is consistently enjoyable to follow.  Tessa Thompson does 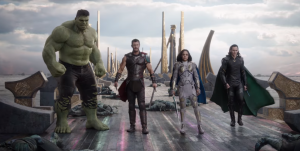 an incredible job as Valkyrie.  Much of the dialogue in this film was improvised and it was supposed to make things between the characters more natural, but the influence of this practice is clearly evidenced by the way Valkyrie moves and talks throughout the story.  She’s far from being dainty or practiced.  There’s a real roughness to her and it’s translated to the audience every time she’s on screen.  Tom Hiddleston has gone full humor for Loki, which is only a disappointment if you liked him as a pure villain (I did.) Loki’s entire character has turned in to who he was in that scene in the first Avengers where Hulk ragdolls him into the ground.   Hiddelston is funny and charismatic though, and still, has excellent chemistry with Chris Hemsworth so Loki fans will not be totally disappointed; but Thor: Ragnarok does indeed pull the fangs out of one the MCU’s best real villains.  Finally, we get to Cate Blanchett as Hela.  There’s a real Shakespearean quality to Hela as a villain, and it’s something that Cate Blanchett just chews to pieces.  She threatening, she has a presence, and she’s intelligent.  It’s a worthwhile debut for the MCU’s first theatrical female big-bad.  Everyone else brings something notable to the proceedings too.  Jeff Goldblum is evil Jeff Goldblum, (which is awesome if you’re a fan,) Idris Elba’s Heimdall finally gets an arc, and Mark Ruffalo’s Hulk is a consistently positive presence in the story.  In fact, Skurge, was the only character I felt didn’t really get a proper showing.  Karl Urban fits into the tone, in the beginning, but the character is one-note, background, and rarely even affects the story.  Putting someone like Karl Urban into a role with one real joke, a weak arc, and very little screentime is frankly insulting to his abilities as an actor.

Final Word: Thor: Ragnarok.  Fun and funny but not impactful.  Even major deaths are glossed over.  It’s a great time at the movies, but fans of the other two Thor films will still be left wanting at some of the resolutions.  I’d recommend it regardless.  I liked the first two Thor movies and I’m not sure that this is actually better than them when it’s all laid out, but this one embraces the weirdness of the concept and just runs headfirst through practical barriers.  The unreality alone makes it worth the plunge, but it doesn’t hurt that it’s wink and smile charming throughout as well.