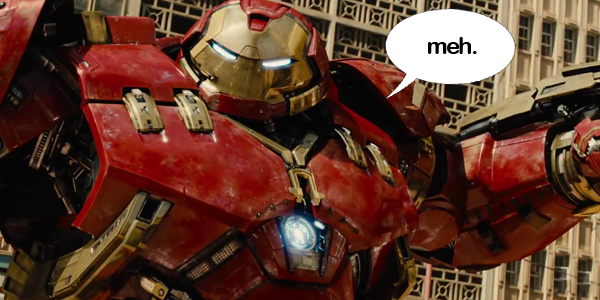 The explosive opening sequence of Avengers: Age of Ultron appeared to be custom-tailored to give fans exactly what they’ve been longing for in a sequel — the team in the thick of things, working together on a mission, trading quips while punching, shooting, and stomping the opposition with all the choreographed finesse of a high-end video game cutscene.  Writer/Director Joss Whedon seemed intent on delivering the  most visually robust spectacle he could but, in doing so, left any semblance of interesting storytelling to be swallowed by bloated, repetitive, and overly computer-generated action set-pieces.

Even so, there are several incredible moments peppered throughout just the first act of the film — Once the threat present from the intro scene dissipates, the audience is treated to a tender moment in which Black Widow calms Hulk (a brilliant bit of acting on Johansson’s part), showcasing the most fluid and impressive transformation back to Bruce Banner I’ve seen committed to film.  Shortly afterward, back at the Avengers’ headquarters, the film’s plot is put into motion when Tony Stark employs a retrieved artifact to kickstart his “Ultron” project, an sophisticated AI hive mind that he believes can remain constantly vigilant to threats, extraterrestrial or otherwise, made against the planet.  Things go awry and the AI consciousness escapes into the internet (depicted here as millions of glowing cubes), but not before assembling several humanoid robots to attack the heroes and send a message about its views on humanity (nonsensical as they may be).

Ultron’s first on-screen appearance, looking like a veritable Frankenstein’s monster of scrap parts, was jarring and memorable, but we could have used a much broader exploration into its moral and emotional depth.  It’s inferred that Stark’s paranoia and drive to shield the world from harm were warped to fuel the villain’s destructive ideology, but Ultron ultimately comes off as paper-thin as most of the Marvel movie baddies.  The less you understand about a character’s motivations, the less interesting they typically become; and with the majority of the film being occupied by redundant fight sequences, there are a whole lot of uninteresting characters filling the gaps.  The fact that Stark is directly responsible for setting events into motion that cost countless lives and caused unparalleled destruction of property is the perfect opportunity to really delve into some complex moral ground.  After all, aren’t the Avengers really just spending the entire film trying to save the world from themselves?  Instead, there is no accountability and zero remorse from the involved parties, which is extremely disappointing.

Still, it was nice to see that some characters, namely Renner’s Hawkeye, were given more room to breathe than in the first installment.  Newcomer, Vision, who doesn’t really show up until late in the film, is instantly exciting to have on screen and delivers his lines impeccably.  Unfortunately, other debuts fell flat. The chemistry between the newly introduced and underutilized Maximoff twins was nearly as poor as their Russian accents and their characters were wholly unnecessary to the story.  There’s also the budding romance between Banner/Hulk and Romanoff/Black Widow which quickly and inexplicably escalates to the point of them wanting to quit the team and run away with each other. This gives way to the film’s most bizarre moment, in which Black Widow describes herself as a “monster” after revealing to Banner that she is sterile.  At best this can be taken as a very awkwardly worded reference to her days as an assassin but, at face value, it’s presented as a rather offensive take equating female infertility to the Hulk’s horrific, destructive power.  Whedon’s trademark charm is still present in frequent instances of witty banter to help balance out the clunky storytelling, but the script seems much more focused on planting seeds for future sequels and creating excuses for another overblown, twenty-minute episode of epic destruction to chew up screen time than manufacturing genuine thrills through a gripping narrative.

At the end of the day, there are umpteen big-budget blockbusters full of large-scale battles in urban landscapes, widespread devestation, and giant robots, with plenty more on the way, and Age of Ultron does little to differentiate itself from the pack.  Seeing as Marvel constantly teases what the future of the franchise holds, there is seemingly no end in sight. Eventually though, even the staunchest disaster-porn fans will tire of the same yawn-inducing scenes of CGI excess and loud noises. If Marvel wants to keep their films fresh and ahead of the curve, they need to really begin focusing their efforts on creating coherent, compelling story arcs that people can get invested in.