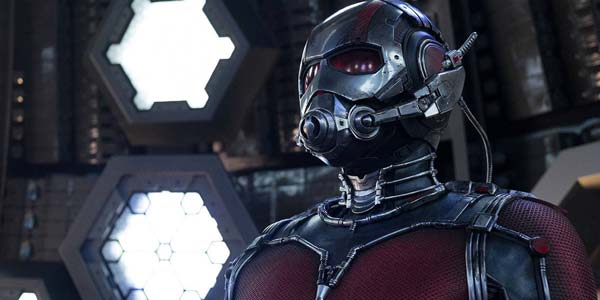 Ant-Man brings Marvel Studios back to its early days, and proves a super hero movie can have stakes even when the fate of the world doesn’t hang in the balance.

One of the criticisms lodged against the early days from Marvel Studios were the small scale of the first cinematic adventures of heroes like Iron-Man and The Hulk.  It’s easy to forget, post-Avengers, that the first films in this shared universe were much more low-key affairs, with no colossal armies or global-scale threats to save the world from, but Ant-Man dusts off that model, delivering the closest thing to a character piece we have seen from Marvel Studios in years.  Appropriate enough to its diminutive hero, Ant-Man is a movie of globally smaller, yet highly personal stakes– there’s a scene in which Michael Douglas’ Hank Pym explains this all to Paul Rudd’s Scott Lang, stating they’re not saving their world… they’re saving the world of their children.

Much like the perfectly executed comedy of Guardians of the Galaxy, this structural shift in Ant-Man makes the movie a breath of fresh air amidst its fellow large-scale, destruction-centric summer blockbuster ilk.  That’s about the only Guardians comparison I feel it’s fair to make, because while there’s a number of very effective comedy beats in Ant-Man, and while the overall movie is a solid entry in Marvel’s catalog, it never quite reaches the levels of pure popcorn entertainment as the story of Star-Lord, Rocket Raccoon and their friends.

Ant-Man does a lot of things not just right, but damn near perfect.  We’re introduced early on to the two generations of Ant-Men– Dr. Hank Pym, a contemporary of Tony’s dad Howard Stark as well as Captain America’s former lady love Peggy Carter, and the man who will become the new Ant-Man, recent ex con Scott Lang.

Pym fashioned a suit to wield the power of his biggest scientific breakthrough, the Pym Particle, which allowed him to reduce the space between molecules, shrinking in size and condensing his strength in relation. He conducted a number of secret missions to save lives, but when S.H.I.E.L.D. wanted to weaponize his invention, he dropped off the grid and took his discovery with him.  This turns out to be the perfect way to tell Pym’s story in relation to what we already know of the history of Marvel’s cinematic universe, running parallel yet rarely intersecting.  The existence of “The Ant-Man” has never been confirmed, making Pym’s former alter ego nothing but a myth in the present day.

Unfortunately for Pym, his former protege– the mercilessly shrewd and semi-unhinged Darren Cross– does not share his proclivity for non-violence, and if he can re-create Pym’s experiment successfully, his plan is to sell the tech to the highest bidder, enabling them with an army of virtually invisible armored warriors with a super human level of strength behind them.  The current head of Pym’s former company, Cross is joined by Hank’s estranged daughter Hope, who disconnected from her father after the mysterious death of her mother Janet.

Scott, meanwhile, is struggling to go straight, and re-connect with his own daughter, whose life he largely missed behind bars.  Despite his best efforts, frustration leads Scott to return to his old ways, partering with some old criminal friends for one last, big heist… the vault in Hank Pym’s basement.  It’s there that Scott finds the Ant-Man suit, as well as Pym himself, who takes Scott under his wing and trains him to use this power effectively.

The movie stays small through to the end.  Scott is never called upon to save the world, per se, but to work with Pym and the logistics team they assemble to sabotage Cross’ potentially calamitous agenda.  This definitely makes the movie feel like a throwback to the corporate espionage-heavy Iron-Man, which sort of makes sense.  Ant-Man was first developed alongside Iron-Man and Hulk among the first Marvel Studios movies.  But while those heroes made it to the big screen, Ant-Man was put on the back burner, being tinkered with over the years by former director Edgar Wright and Joe Cornish, and final creative team of director Peyton Reed and writer Adam McKay.  The multiple fingerprints of these talented guys aren’t exactly seamless– there are definitely moments that are very identifiable as the work of Wright, and others that obviously came from McKay, for example– but somehow the hodgepodge works all together.

Much of this is thanks to the cast, which is solid across the board.  Douglas is amazing as Pym, with a bigger part and more prickly charisma than his fellow veteran actors in the Marvel universe, like Robert Redford and Glenn Close.  Conflict and regret are core components of Pym as a character, and while the cinematic version eschews some of the darker corners of his history (for now, at least), his guilt over the creation of this potential weapon of mass destruction, and the death of his wife are weights Douglas carries perfectly throughout the movie.  This is something he shares with Rudd’s Scott, who is near-suicidal in his zeal to prove himself as a true “hero” to his young daughter.  Scott is definitely one of the simpler heroes we’ve seen in Marvel’s universe, but that works very well for the trajectory of his story here.  In between the two is Hope, Pym’s daughter played by Evangeline Lilly, who is fantastic.  It would have been very easy for Hope to be a rote angry “tough girl” character, an idealized and flawless foil to the troubled male leads.  But Lilly brings an obvious vulnerability to the character beneath her tough exterior, which speaks volumes about both her and the strained relationship between her and her father.

Interestingly, while Cross is one of the more loathsome villains we’ve seen from Marvel in a while, he, too, shares in the pathos.  While his disregard for life and hunger for power have left him an impossibly dangerous man, Cross is also hindered by a sadness that stems from what he considers a lack of approval from his former mentor.  Much like Hope, Cross is angry about the distance between he and Pym, though his resentment manifests in an entirely different way than we see from Hank’s daughter.

Even the supporting cast is great.  Scott’s criminal buddies, played by Michael Pena, T.I. and David Dastmalchian, provide some great comic relief, though they’re certainly not buffoons.  Their skills are imperative to the finale, which offers something unique for not only a Marvel movie, but super hero movies in general.  While Ant-Man is seen as a solo hero, he has an entire ground team working with him, giving him the edge during the attempt to foil Cross’ plans.  I love the concept of a logistics team working behind the scenes in support of a public-facing hero.  It’s totally fun, bringing a 24-esque second layer to the action, and ends up providing a welcome– if slight– realism to the spectacle we’re seeing on screen.

Peyton Reed proves again to be a very capable director, and the shrinking effects in this movie are truly remarkable.  It’s tough to create visual spectacle in a film series that has seen floating cities, alien planets, armies of robots, and viking fortresses, but Reed did just that.  Using macro-photography, he employed extreme close ups of live action footage in practical environments as the backdrop for the colossal world Scott experiences when he shrinks.  This pays off in dividends, as it gives the movie an impressively familiar and lived-in, yet still alien feel.  There’s a scene where Scott shrinks in a bath tub early on and has to escape from a literal flood of water from the faucet that is not only thrilling for its well-choreographed action, but also its hyper-realistic backdrop, which paints a far more believable picture than if Rudd had been acting on a gigantic bath tub set.

Ant-Man’s shrinking powers also play into his combat style in a truly fun way, as our hero shrinks and grows in mid-fight, using his weight as his primary weapon.  This honestly could have been laughably goofy in it didn’t work, but the final effect is cool, very comic book-y, and features more than a few applause-worthy action beats on par with Captain America’s amazing fights in The Winter Soldier.  The final battle plays with scale even more, as both Scott and Cross, wearing him Yellowjacket battle armor, increase and decrease in size as they square off.  There’s a kinetic energy to this extended sequence, which works very, very well… especially considering the delightfully silly venue for the climactic fight, which I won’t spoil here.

I liked Ant-Man a real lot. It was really nice to see Marvel go back to another smaller story, one where the fate of the entire world isn’t explicitly in jeopardy.  The tone was refreshing, and this cast of characters brings some great new faces to the Marvel Cinematic Universe, especially Douglas’ Hank Pym (who I really, really hope sticks around for a while).  It’s a solid movie that features some great action and effects work, some visual dynamism, and a punchy script with a good ratio of funny gags to character moments.  The end result is not only a lot of fun, but also a movie that is very effectively tied to the bigger Marvel Universe.  There’s a very cool fight between Ant-Man and an Avenger, and by the end of the movie, it’s obvious that Scott’s path will cross with the team very soon.  While this universe-building has dragged down some Marvel movies– especially Iron-Man 2 and Age of Ultron— with Ant-Man, the greater Marvel universe is woven much more comfortably into our story.  If Marvel can make any of their future crossovers as fun and cool as what we see in Ant-Man, they can do as much bridging as they want, in my opinion.  It totally works this time, and Ant-Man works, too.