MOVIE REVIEW: Avengers: Age of Ultron is Flawed But Entertaining 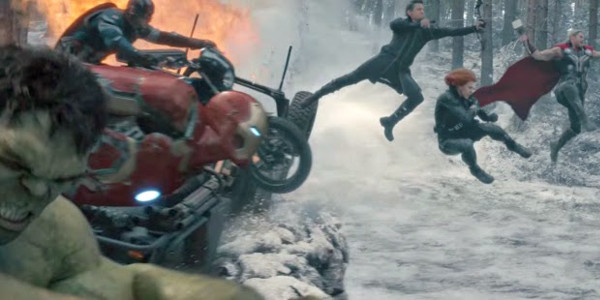 There’s a whole lot of Avenging going on. But is it too much?

Avengers: Age of Ultron proves that once again the sequel usually isn’t as good as the original. That’s not saying it’s a bad movie, but it certainly doesn’t live up to all the hype.  The movie is good but not great. This is a case where the action sequences cover up all the flaws that are in plot… it was almost one set piece away from being a Michael Bay film.

There is just way too much going on here. One of the things that director Joss Whedon did extremely well in the first film was balance all the characters, but that is just sorely missing in Age of Ultron.  The film could have been longer, to allow for more character development.  Don’t get me wrong, it’s not like I hated the film, but it was lacking a lot.

On the positive, I did like the introduction of Scarlet Witch, Quicksilver, and The Vision, and that the main focus of this film was Hawkeye. In this film, Hawkeye’s back-story is closer to the Ultimate Comics version, as opposed to the one more people are familiar with, but it really humanized him.

At least for me, there were more negative than positives. I’m still confused on what Ultron is ultimately trying to achieve. There was just too much going on to figure it out.  The next film is supposed to be Civil War, but I don’t see how this film leads into it.

My two main complaints about the film are as follows:

I’m going to say I’m the exception here. Maybe because I have a degree in film, have an insane amount of comic book knowledge, and can separate myself from being a fanboy with the comic book film.

Overall, Age Of Ultron is still a good film for fans and non-fans… just don’t over think it.