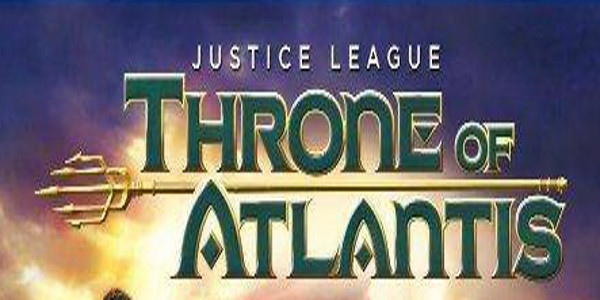 “Why don’t we just call you White Fish!?”

Justice League: Throne of Atlantis takes place a few weeks (I think…) after the less than favorably reviewed Justice League: WAR (I liked it…). The Justice League (The Super Seven?) hasn’t come together as well as some had hoped, with the members pulling an Avengers and going their separate ways after the danger has passed. But a recent low-profile missile theft from a Naval submarine has led to some startling realizations that may require the team to come together once again.

Okay, so let’s get this out of the way.

NOT FOR CHILDREN. Despite the colorful art and triumphant poses on the cover, Justice League: Throne of Atlantis is rated PG-13. To be honest, it’s sort of surprising they even got away with that. The movie contains a few scenes involving blood, graphic violence (heads leave bodies!), and a few s-words thrown in for good measure.

Well then, let’s get down to the nitty gritty. There’s a lot of good working *for* Justice League: Throne of Atlantis but it finds itself at odds with just as much bad. The characters’ individual priorities and agendas are easy to throw yourself in to. Cyborg’s man VS machine conflict is cliché, but it’s not overpowering. We get a 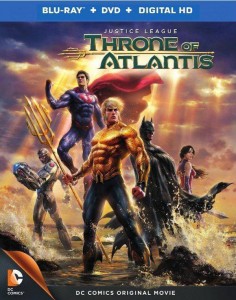 real sense of how it’s affected his psyche thus far in a short but revealing dream sequence. The same can be said for the two God-level characters of Wonder Woman and Superman. Their development happens alongside each other which strengthens a oftentimes overlooked aspect of their characters with the necessity of blending in to society.  And finally Aquaman gets a slightly modern revamp in his story that focuses more of the human aspects of his character rather than the haughty, royal, superhuman personality traits. A less egotistic Aquaman makes him much more accessible for new fans. I personally didn’t feel alienated by this new version of the character, but loyal Aquaman fans might (*crickets*).

The movie does its best work in the fighting and action scenes as their very fluid with each movement mirroring the on screen character’s personality and discipline as well as background and abilities. The voice cast this time matches this dynamic with a fantastic array of character moments that are well acted by Sean Astin (Shazam), Rosario Dawson (Wonder Woman), Nathan Fillion (Yay! Ahem…Green Lantern), Christopher Gorham (The Flash), Shemar Moore (Cyborg), Jerry O’ Connell (Superman), and Jason O’ Mara (Batman); I want to make a special note of Matt Lanter (Aquaman) and Sam Witwer (Orm). Lanter comes off as incredibly natural in his speech, matching his voice perfectly with the animations of his character to close the gap between the two, and Witwer pulls off the stuffed shirt evil schtick with proficiency despite not typically playing that particular archetype.

I hate to say it, but the story is where Justice League: Throne of Atlantis fails. The Justice League stuff is just plain great, especially when it’s pretty much the sole focus of the first act, giving it adequate time to build up. But when the second and third act comes along, the focus splits between Justice League and Aquaman’s origin, which ensures that neither gets enough time spent on it to add up to any tangible suspense. The

investigation of the Justice League will have you on the edge of your seat as they each coordinate and bring their own personal touches to the case to advance it gradually. Once that ends though it’s just a race to bring Aquaman up to speed. Everything about his story becomes rushed at that point. There are attempts to add intrigue as he struggles with his newfound identity (for exactly 24 seconds), a spark between his savior and protector Mera starts to grow (and a full on romance develops in 3 minutes), and he practically accepts and rejects the burden of the throne in the same sentence (zuh?). It lacks suspense, so even when a legitimate idea comes along it’s impossible to see anything but flaws due to a lack of focus in the plot. I started asking the questions I wasn’t supposed to ask because I didn’t feel connected to the story. It’s like I was on a train ride and I was being compelled to get emotionally attached to a cow we just passed by.

Final Word: The Justice League part is great. The characters are perfect companions to their comic counterparts and their personal conflicts really add nuance to their personalities. The investigation is compelling and enjoyable. It uses all the members of the League to pull the most out of the te 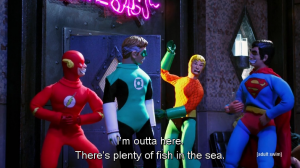 am and to provide a convincing example of why they are better off together. Aquaman’s origins see some interesting developments as he deals with his incredible power with absolutely no means for comparison. It leads to some entertaining realizations for the character. Unfortunately the second act slows things down too much and they don’t pick up enough for the third; making the Throne of Atlantis aspect the proverbial thorn in the paw. It leads to some inconsistencies and obvious plot devices that telegraph a little too much and a little too early to be intriguing. There are also some inconsistencies with WAR (they took on Darkseid, but Orm can’t be stopped? Really? Orm?) that leads to some illusion shattering questions. Aquaman’s origin is too rushed as an obvious attempt to get him caught up with the rest of the characters, so he can be on equal footing for future installments. It’s a disservice to the character when a potentially interesting story is glossed over for brand recognition.

They had the start of a great Aquaman origin, but they didn’t give it enough singular time. It’s yet another stumble for a character that’s already seen as a joke; and that’s a shame. They had two good stories here with both the Justice League’s investigation and Aquaman’s origin. They could have done one and given it a proper showing, but instead they tried to do both and ended up with neither. The Justice League falls two acts short, and the Aquaman’s origin bull-rushes to an unsatisfying conclusion despite having a strong start. 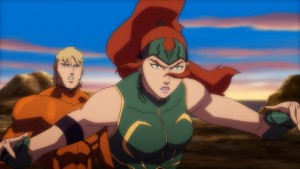 Still, it’s a feast for both the eyes and ears, and the investigation scenes are the Justice League proving that the brand DC (Detective Comics) isn’t just a name. I would still recommend Justice League: Throne of Atlantis for its many good points and a great modern interpretation of Aquaman, but you’ll also face just as many problems as you will merits. You’re just gonna have to weigh those with how much you want to see Superman fight a giant squid.