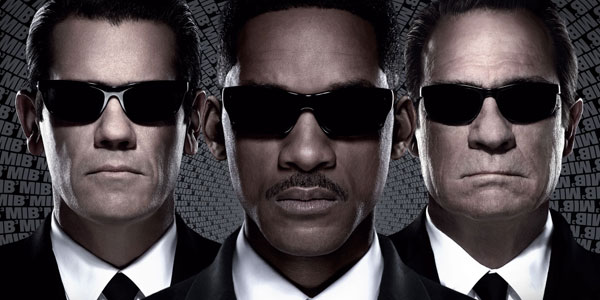 The last thing I was expecting walking in to Men In Black 3 was that the movie wouldn’t be dreadful, so imagine my surprise when not only was it NOT awful, but it was pretty damn good!  After a dull first sequel, Men In Black 3 feels like a real return to form for not only the semi-franchise, but also director Barry Sonnenfeld, and it makes for a very enjoyable and consistently entertaining Summer blockbuster.

Like 21 Jump Street, another recent surprise, I couldn’t see any reason to return to the MIB universe after all these years.  There’s a real soft spot in my heart for the first movie, with its great, unique sense of quirky-cool and solid pacing that Sonnenfeld is great at (when he’s on, at least) that lends itself to virtually unlimited rewatchability.  MIB 2 was a complete misfire, as bad as it was forgettable, but the years since have been kind to all involved and the third installment really captures the same feel as the original.

One of the big things that helps MIB 3 is a fun and surprisingly well-structured story, complete with time travel that does an above-average job at working out paradoxes and continuity kinks that go hand in hand with this tricky genre.  It’s a clever story, and entirely unique from the previous MIB adventures, which felt too similar.  This time out, when Agent K is assassinated in the past by the grudge-holding alien terrorist Boris the Animal, Agent J has to travel back to 1969 to save his partner (and, of course, the Earth).  J’s adventure in the late 60’s was nowhere near as eye-rolling as you might expect, and I absolutely adored the world created here.  The 60’s Men In Black agency has a retro flair that adds a classic sci-fi feel (right down to the SCDP-style kiosks for the skirt-wearing female agents), and even the aliens– courtesy of makeup master Rick Baker– had a wildly different and old school feel to them, with giant exposed brains, weird eyes, shiny costumes and all kinds of classic outer space flair.  There’s plenty to love in the MIB of ’69, and seeing these scenes made me wish for more adventures exclusively in these retro, early years of the agency.

What really sells the out-of-time story is Josh Brolin, who is impossibly great as the younger, less world weary and cynical K.  Brolin absolutely transforms into Tommy Lee Jones, and it goes way beyond their similar rugged good looks to include everything from vocal inflection and the accent, to his delivery and even body language– I’ve been a Brolin fan since Goonies, but his work here is some of the best I’ve ever seen from him.  We also get to see a new, lighter side of K as a younger agent (including his quasi-romance with Agent O, the new head of MIB in our present day), before he became the somber, stoic agent that, in the present day, has become even more somber and stoic much to J’s concern.

Will Smith’s Agent J is really playing the straight man here, but J is one of the few characters I really enjoy watching him play, and he holds onto the right mix of slapstick goofiness and wry charm that Smith can pull off in his sleep.  We also get former Conchord Jemaine Clement as the more imposing than expected villain Boris, and Michael Stuhlbarg as Griffin, who plays the role with enough charm and warmth to excel way past his plot-point roots.  Also of note is Bill Hader, who kills it in a short but incredible scene as Andy Warhol… it’s one of a few great historical moments that get tied into the fabric of the film, and each one– from The Factory, to the Mets World Series win, to the moon launch– are woven in organically in a way that serves the bigger story.

What action we get here is decent, but Sonnenfeld and the crew are wonderfully economical– this is the tightest, best flowing movie he’s made since Big Trouble– and they really focus on bringing the character moments to life, as well as the humor– Men In Black 3 is the second movie I’ve seen this Summer that had me laughing out loud at a healthy share of the jokes*, because whether they were cheap, weird, out of left field or perfectly delivered, the comedy just WORKED in this movie.  There’s a bit of sappy character-connecting pathos late in the story that comes full circle in the end, and it’s one of the few complaints I’ve heard around the internet… I won’t spoil it here, but I didn’t really mind it, and felt the end is a nice way to round out the arc for both J and K in this movie… and maybe shed some new light on their previous adventures as well.

I went in to Men In Black 3 expecting absolutely nothing.  What I got was a well-crafted, clever sci-fi comedy that mixed some neat and well-thought-out time travel tropes, solid performances from a good cast, and well-drawn characters into a genuinely quality popcorn flick.  With a script that’s way more witty and playful than you’d expect, totally cool (and often practical!) aliens, and a stylish retro feel I want to see more of, I can honestly say that I’d keep coming back for more MIB adventures, as long as they were all this good.

(*The other being The Avengers, still hands-down the funniest movie I’ve seen this year.)