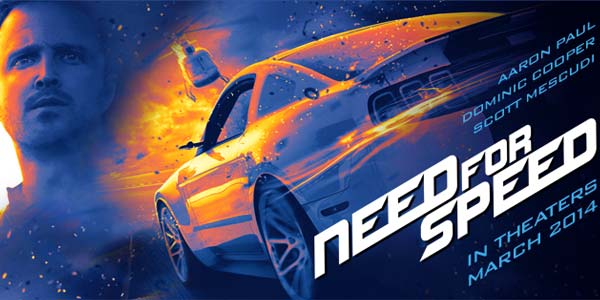 Amazing car stunts are not enough to revv the engine of this race and chase action movie.

If there is one thing that Need For Speed delivers in spades, it’s incredible automotive action.  The impressive stunts on display were realized almost exclusively through practical driving, as opposed to digital effects, and they make for plenty of truly thrilling scenes to behold.  That’s a good thing, because, being perfectly honest, the car action is what most people will be looking for when they buy their Need For Speed ticket.

Unfortunately, there isn’t much to get excited about beyond the high octane thrills from a collection of truly awesome vehicles doing even more awesome things.  Our story– a stock innocent man wrongly convicted of a crime, out to get revenge- slash- prove his innocence– is loose and sloppy and often illogical. It’s mainly present only to move us from one kinetic action set piece to the next.

This should not come as a huge surprise, as a strong narrative was rarely an important feature of the Need For Speed video game series on which this movie is based.  After a brief intro to establish our characters and their vaguely-defined world of underground car racing, Aaron Paul’s blue collar street racer/ good guy Tobey Marshall is quickly set up to take the fall in a vehicular manslaughter caused by his rival, Dino Brewster (a subtly slimy Dominic Cooper).  After his release from prison two years later, Tobey sees a way to exonerate himself while proving Brewster’s guilt in the accident, by winning the DeLeon, an extra super-secret street race created by an internet racing guru named Monarch (Michael Keaton).  The connection between the DeLeon and Tobey’s innocence is glossed over vaguely, as is exactly how our hero ends up with a $3 million custom Mustang with which to cruise cross-country and attend the legendary race.

But logic is not something you’ll find much of in Need For Speed; this is a world where an ex-racer illustrates his excitement to be back in the gang by stripping nude at his office job before walking out, or where a car connected to a crime is used in a race against its guilty owner, rather than be turned over to the police.  In other words– and I hate using this cliche– Need For Speed will only really work if you turn your brain off and don’t think about it too much.

Paul does his best as Tobey, bringing a silent, haunted tough guy attitude to the character which Breaking Bad fans should recognize right away. He’s perfectly passable as our hero, and he honestly looks a lot better when compared with his crew, a group of dudes shamelessly ripped off from the supporting casts of other action franchises like The Fast and the Furious and the Ocean movies.  And while it’s nice to see Imogen Poots, her love interest/ damsel in distress/ quirky girl character is given very little stake in the story, to the point that when she is sidelined in the final act her absence is barely felt.

The only real stand out in the cast is Michael Keaton, who– with this and RoboCop— is on a roll injecting life into an otherwise lame duck action flick.  His racing patron Monarch steals virtually every scene he gets, and his presence is well-felt, even as he is isolated from the rest of the movie holed up in his podcast headquarters.  Keaton chews the scenery in his office and gets so energetic and weird with his delivery, watching him here almost makes the upcoming Beetlejuice sequel not seem like such a bad idea after all.

But the real star of Need For Speed are the stunt drivers and their incredible cars.  For all the contrived, corny and sub-par storytelling and half-baked characters, I wound up getting sucked right back in to Need For Speed as soon as we got back behind the wheel.  The action beats are numerous, unique and beholden to the EA game series– game fans will recognize everything from inner city police chases, to off-road races, to 200 MPH drag runs represented here– and each scene has its own tone and sense of energy.  Director Scott Waugh has a great eye for action, and the stunts are filmed impeccably.  The top notch action is conveyed in a clear and concise manner, never letting us escape from the visceral energy of knowing this all happened with real cars and real drivers, all moving real fast.

I have always loved the classic car movies– Bullitt, Vanishing Point and the like– and the well-filmed, real-life stunt racing and the impossibly awesome, multi-million dollar custom cars in Need For Speed were just enough to keep me checked in.  This is not a good movie– in many ways it’s actually pretty crummy– but the technical achievements of the confident camera work, ambitious practical effects and incredibly daring stunt crew make for a fun time whenever the characters just shut up and drive.