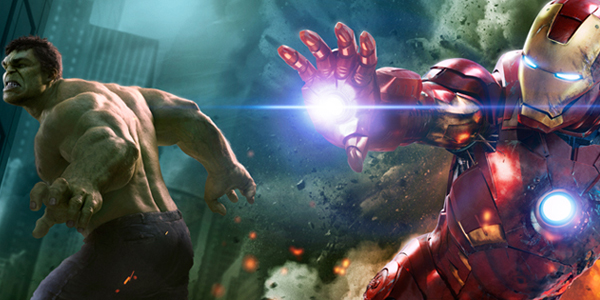 The Avengers can be seen as the antithesis of Spider-Man 3.  Whereas Sam Raimi’s much-maligned blockbuster suffered from too many villains in one film, The Avengers has to spend much of its two hour and twenty minute running time just introducing its main characters and getting the audience up to speed.  Luckily, writer and director Joss Whedon manages to keep the pace high and even the periods of long exposition don’t wear out their welcome.  Most of the dialogue is exactly what we’ve all come to expect from a Marvel film; witty banter, tons of one-liners and sexual innuendo, etc.  Robert Downey Jr., whose role as Iron Man kicked off this whole event four years ago, gets probably the most screen time of anyone and delivers every line, funny or not, with conviction.

The film’s plot is understandably thin, even by the genre’s standards.  It serves simply as a frame to shove the big personalities and dynamics of the characters into and to give them all a reason to assemble in the first place.  Thor’s evil brother Loki (played terrifically by Tom Hiddleston) steals the Tesseract from S.H.I.E.L.D. and uses it to cause lots of crazy CGI destruction and mayhem.  That’s all I could really grasp of a story among all the scenes of clashing superhero egos and Scarlett Johansson’s skintight outfit, and I wouldn’t have had it any other way.  It was enough to lead into one of the most flat-out entertaining action sequences I’ve ever seen.  At one point, the camera pans nonstop for a good few minutes and captures glimpses of every hero fighting off enemies in their own distinct ways.  It was an incredible sequence and it captured the unbridled spirit of bringing a comic book to the big screen.

The main focus of the movie is obviously on the Avengers themselves, and the cast shines.  Mark Ruffalo steps into the shoes of the calm and collected Dr. Banner with ease and Jeremy Renner gets a lot of mileage out of his relatively limited time as Hawkeye.  The other mainstays — Chris Evans as the no-nonsense Captain America, Chris Hemsworth as the stoic but compassionate Thor and Samuel L. Jackson as the very loud Nick Fury – were predictably great.

The Avengers definitely has flaws.  As I said earlier, the script is incredibly predictable.  The whole concept feels a little bit too familiar after watching so many of these Marvel films with the same cookie-cutter plots.  But complaining about the depth of the characters or the small continuity errors (how come Stark’s arc reactor doesn’t always glow through his t-shirt?) would be missing the point.  It’s a fun summer event that provides a couple hours of escape and won’t destroy any brain cells, even if it doesn’t require you to use many.