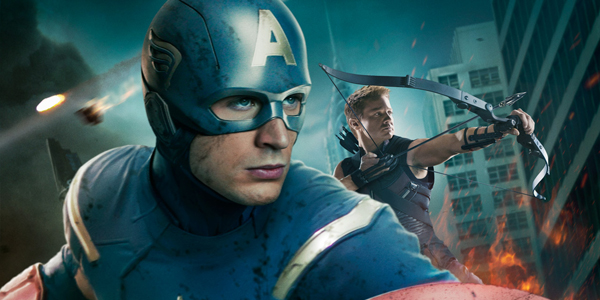 Like the old saying goes, any great team is more than the sum of its parts.  That concept is illustrated brilliantly in The Avengers, which escalates the scope and characterization of Marvel’s movie universe into the stratosphere and delivers the most entertaining, most satisfying and what might be the greatest comic book movie ever.

Marvel’s movie universe has been an ambitious project, carefully connecting all their heroes in the same universe to build toward The Avengers, and while some of the individual movies have suffered from too much interference from the greater continuity, all that work has paid off brilliantly in the first super hero team-up movie. While there have been some highs and lows in their individual movies, one thing Marvel absolutely nailed was casting– using near-Pixar levels of wisdom to find the right actor for each character, everyone from Chris Hemsworth and Scarlett Johansson to Chris Evans and (of course) Robert Downey, Jr. really understand their characters and have consistently sold these iconic heroes in the real world. That same pedigree of great actors playing the Hell out of these classic characters continues here– with Mark Ruffalo bringing Bruce Banner to life in a way we’ve never seen before on film– and extends behind the camera with the inclusion of director Joss Whedon.

Whedon’s involvement wasn’t necessarily a sure thing for me… while I love Buffy, Firefly and many of Joss’ other projects, I was afraid he’d focus too much on his trademark stylized dialogue and fit the characters into too many “Whedon-esque” story arcs and scenarios. After seeing the final movie, Whedon absolutely nailed the entire movie with the perfect balance of character moments, amazingly well-executed action beats and way more humor that I was expecting (seriously, The Avengers had me laughing out loud more than most comedies). I cannot think of a better director to assemble these heroes together, and Whedon’s deft precision keeps the movie from becoming too single-character focused, bouncing around constantly to ensure each one of our heroes shares top billing. Working with a great ensemble has always been one of Whedon’s strong suits, and his work on The Avengers feels like a true end game of his skills as a cast juggler.

The movie is split into two acts, and the structure is, quite frankly a perfect fit for the story being told and also a great tribute to comic books. The first half follows the story of our heroes coming together and forming the team, but in true comic book fashion these first encounters are often wrapped around “hero vs hero” fights (a true staple of any comic book team-up), and each scene is both unique and incredibly true to the character. The Thor/ Iron-Man fight is pretty epic, but what really brings the scene together is Steve Rogers’ decision to jump straight into the midst of the fight, despite being hopelessly outgunned and outmatched by the demi-God and the armored avenger. Captain America doesn’t get much character growth in this movie, but what he lacks in forward development he more than makes up for by proving himself every bit the capable and awesome leader we were sadly short-changed on in his own movie during the Howling Commandos montage.

On top of the physical sparring, the dialogue really helps these characters play off eachother. Cap’s boyscout attitude leads to an unspoken respect with Thor, while inspiring the rebellious streak in Tony Stark. Tony, meanwhile, finds a protege of sorts in Bruce Banner. The two geniuses hit off an odd friendship, with Tony taking the timid and neurotic Banner under his wing, while also prodding him about his giant, green alter ego– it’s not a case of Tony torturing Bruce to be a dick, it speaks to Tony as a character. He’s a scientist, and is obsessed with figuring out how things work (remember the amount of time he spent tinkering and experimenting in the first Iron Man?)… he wants to understand how Banner works, and part of that is figuring out exactly how the monster “happens.”

Thor in The Avengers is very cool, and much more heroic than in his solo movie. The same wonderful chemistry between he and his sinister brother Loki is clearly on display here, and including Thor’s personal quest to try and save his brother adds another level to the conflict presented by our villain. Black Widow gets more screen time than I would have expected, and Scarlett Johansson plays her as the ultimate non-super powered badass. She’s tough, an incredible fighter and a great spy (her introduction scene in this movie is a classic Whedon moment that perfectly blends comedy and ass-kicking action), but she’s still overshadowed by these larger than life heroes. This comes to a head during her amazing sequence as she is chased by The Hulk the first time we see Banner transform. The scene plays out like a horror film, with all Natasha’s awesome skills rendered moot by this impossible creature, and the gravity of this new world is a main focus of her character throughout the movie. Hawkeye gets a bit short changed due to the plot of the movie, but Renner plays him well and he gets some brilliant bits during the final fight scene that had me grinning ear-to-ear.

Tom Hiddleston may be my absolute favorite actor in the Marvel movie-verse, and his sad, damaged take on Loki was the high point of Thor. That same wonderful performance is on display in The Avengers as Loki ups his game in a remarkably personal attempt to subjugate the Earth with his (non-descript) Chitauri army, which has as much to do with his brother issues as it does his desire to rule. The best part of Loki’s performance here is the constant fear right behind his eyes proving he’s nowhere near as in control of this situation as he’d like to be. The stakes are high for Loki and while he is a legitimate threat to our world he is also in way over his head. It’s a brilliant and surprisingly layered performance by Hiddleston and it makes me crave even more menace from the God of Lies as soon as possible.

The second half of the movie takes place after the team has finally assembled (mostly), as they must stop Loki’s army from invading Earth. The final action sequence is incredibly well-executed, and very smart. While setting the entire affair on a few blocks of Manhattan may seem small-scope for such a huge movie, it actually makes a lot of sense in-story, as Cap orders the team to contain the threat in this condensed area. It also means the action can overlap beautifully, with each hero committing to their role to quell the attack, and lots of geek-fantasy mini-teamups as they cross paths throughout the scene. Whedon’s camera is very controlled and sees right through the chaos, avoiding any messy, jumbled shots that disrupt the narrative of the action, and the combat escalates brilliantly starting small and growing bigger and bigger as the team must find a way to stop the invasion at its source as more (and bigger) attackers arrive.

I’ve been saving the best for last, and the best in The Avengers is the Hulk. Never before has the green giant been illustrated so perfectly on screen, and the combination of excellent effects work and Ruffalo’s great performance make for something really special. Hulk’s action moments are impossibly cool in the finale (if you’ve seen him jump to Tony’s rescue in the trailer– that’s not even in the top ten of his best bits here), and I absolutely love that it’s Captain America’s leadership that controls the monster just enough to focus his rage on their mutual enemies. Hulk really does own every scene he is in (including the movie’s funniest moment as he takes on Loki), and Ruffalo also gets the best line… just try not to clap when he finally reveals to his teammates how it is he controls his anger. It’s a brilliant character moment and it plays out to absolute perfection.

I’ve held off on a lot of plot details, and it’s not just to remain spoiler-free… in truth, the plotline of The Avengers is pretty rote, going through the beats you’d expect and see coming way in advance, but what this story really serves as is a forum for these characters to interact, learn to work together and become a team, and that focus on characters is the best part of the movie. There’s a ton of “stand up and cheer” moments in The Avengers, but you’d be surprised by how many of these perfect moments aren’t based on the often brilliant acting, but sterling character moments and lines of sharp dialogue delivered perfectly.

The Avengers is an absolute blast, one of the movies I was dying to see again immediately when the credits rolled. Like the team in the story, The Avengers is greater than the sum of its parts, and stands confidently on the shoulders of the movies that came before it as the finest, most faithful adaptation of the comic series I could imagine. The movie is big, bold and almost impossibly entertaining from start to finish– it’s smart, packed with dynamite performances and not afraid to go really broad and colorful, delivering an experience completely unlike the more grounded comic book movies such Nolan’s Batman, which up until now have been the benchmark of the genre. The Avengers is a game-changer in its proud refusal to stay grounded, and the slow build of this Marvel movie universe from the small and practical Iron Man to the much larger, cosmic scale seen here pays off perfectly and– based on the mid-credits teaser– is just the beginning as things are about to get even bigger… and more AWESOME.