UPDATE: You can order your set here on on Entertainment Earth! 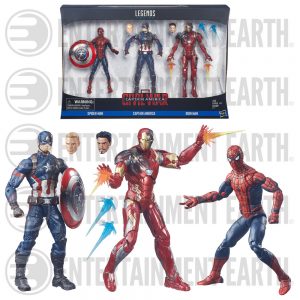 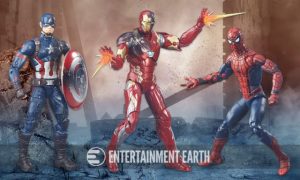 If you’re anything like me, as soon as you saw the new Spider-Man show up in that Civil War trailer, the first thing on your mind was ‘where’s his action figure?’

Marvel has been pretty withholding when it comes to showing off their newly rebooted Spider-Man until now. Yes, the trailer for Civil War eventually confirmed the new iteration of the webslinger– played by Tom Holland– would make his debut in this third Cap movie (and what a debut it is!!)… but we didn’t get MUCH Spider-Man exposure thus far… especially in the toy aisle.

Now, on the penultimate day before the release of Civil War, that’s starting to change, and with good reason. Spider-Man’s scenes in Civil War are, in a word, AMAZING, and I can’t imagine Spidey won’t somehow become an even more beloved hero than ever before after this weekend.  So it’s the perfect time for Hasbro and Marvel to let us in on their plans to give the new Spidey the toy treatment… and they did just that!

Earlier today, Marvel posted a live unboxing video offering a first look at a new Civil War themed three pack of 6″ Marvel Legends.  The box set will include movie versions of Captain America and Iron-Man (each with alternate, battle damaged decos and alternative unmasked heads), and Spider-Man in his brand new costume!

As you can hear in the video above, this three-pack will be available August 1st on HasbroToyShop.com… with “a potential to find ways to get it earlier” (translation: Hasbro will have this sucker for sale at San Diego Comic Con).

I love this set!  I’m a sucker for Hasbro’s Marvel movie Legends– the sculpting, detail, and engineering on these figures is exceptional, and makes for figures that I find much more visually interesting than the perpetually reused blank buck bodies of the comic book style figures– and these current Cap and Iron-Man sculpts are some of the best yet in this scale. The inclusion of the alternate heads, new paint apps (and even boot thrusters for Iron-Man) make these figures feel more like legitimate variants as opposed to straight re-packs, and the new Spidey looks perfect.  Each subtly unique flair of his new costume seems present in this sculpt, and his range of movement definitely shows promise.

Stay tuned for more details on this great new set, as news develops, and let us know how excited you are to add this three pack to your collection in the comments.  I’m genuinely curious if I’m the only one absolutely DYING to get my hands on these figures.