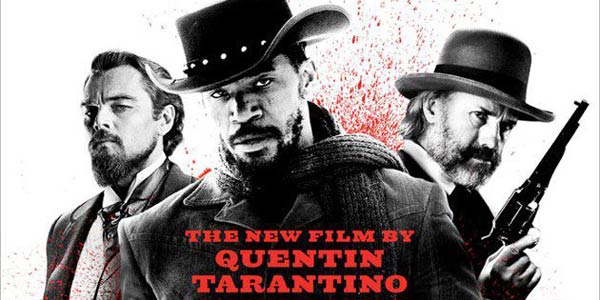 2012 was such an amazing year for movies, it took another week of consideration (and yes, catching up on movies I missed)… but here, at last, is my list of the Ten Best movies of the year.

Making a Top Ten list of movies almost feels criminally negligent in a year as great for film as 2012, and I’ve been back and forth, up and down this damn list quite a few times.  But there comes a moment where you have to cut ties and just go with it– and this list feels pretty good by me.  I should warn you up front, there’s lots of likely great movies that came out this year which I have not seen yet, due either to laziness or unfortunate geographic location/ it’s not on DVD yet.

I have no doubts that Holy Motors and Beasts of the Southern Wild and Zero Dark Thirty are amazing films, and each deserve your attention, but there’s not enough hours in the day so they will be tragically ignored from my list this year.  I’m TOTALLY gonna check out those and many more flicks I missed, but with that warning out of the way… below is the best of the best, of what I DID see this year. 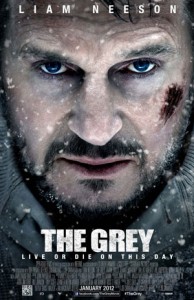 Joe Carnahan’s survival story offered some of the most stunning visuals I saw on screen all year, as Liam Neeson’s magnetic survivalist Ottway leads a team of oil drillers through the artic wasteland of Alaska.  There’s an amazing escalation as their plight continues to get harsher and harsher, and the use of a particularly vicious pack of wolves as a symbol of the cruel power of nature made for a terrifying opposition.  The Grey wasn’t afraid to get dark and bleak, but the finale, when that bleakness finally gives way to unadulterated cinematic badass-ery was one of the best endings I’ve ever seen on film. 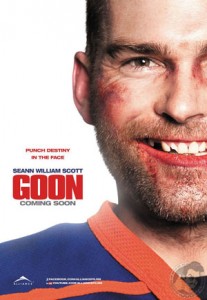 This hockey comedy was grossly overlooked by many until the end of the year, and I’m hoping its presence on so many best of lists helps it find an audience.  Sean William Scott is perfect as Doug, a super nice guy whose only true talent lies in delivering and taking severe punishment, making him a star on the hockey team that drafts him for his violent skills.  In a movie with as much visceral on-ice violence and excellent gore as this, it seems weird to call it sweet, but the balance of Doug’s two-fisted action and his genuine sweetness, especially when it comes to Alison Pill’s adorable Eva, is absolutely charming.  Getting a great turn out of Liev Schreiber (and his epic mustache) as Doug’s rival goon adds to the greatness of this infinitely watchable movie. 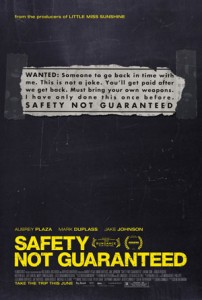 With its fantastic cast and excellent sense of soft sci-fi, Safety Not Guaranteed is another offbeat yet utterly charming movie.  Aubrey Plaza’s Darius lets the talented actress refine her Parks and Recreation cynicism, before giving way to the truly weird yet captivating Kenneth (Mark Duplass).  Duplass had such a strange screen presence, and he and Plaza had such amazing on-screen chemistry, I would have watched their oddball romance bud anywhere, but setting that love story in the framework of a smart and surprisingly tight possible time travel storyline made this film a joy to watch. 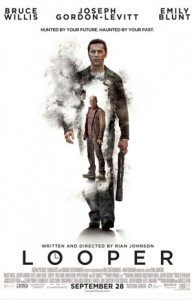 Hey, speaking of smart, original time travel movies… Looper was the latest and greatest from Rian Johnson, who I am more convinced than ever is one of our best filmmakers.  The pacing of this movie is wonderful– taking the first act to set up this seamless near-future world, once the rules are in place we stay fixed on this very personal and smallish story, as our main Looper, Joe, is given the task to kill his older self, who makes a break for it to fulfill his own mysterious agenda.  Bruce Willis reminds us why he’s so great and Joseph Gordon Levitt gives an incredible performance, transforming into the young Willis.  This movie builds slowly to its amazing climax, which covers all bases from the crazy action of old Joe’s attack on the mob, to the incredibly personal as his younger self defends his would-be new family from Joe’s endgame. 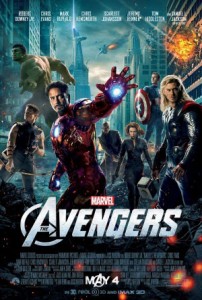 I cannot think of a more perfect popcorn blockbuster than The Avengers.  The end result of Marvel’s half-decade of commitment lead to a fantastic team-up of the biggest heroes in comics, one that is nonstop entertaining from start to finish.  With the witty dialogue he’s known for and some great– and unexpected– chemistry between our heroes, this movie was a blast.  There’s a simple sheer “wow” factor watching this and realizing we’re not only actually seeing a movie starring all these big name icons of comics together, but that Whedon, Marvel and their crew absolutely got it right. 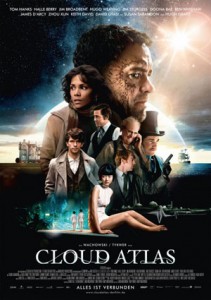 The Wachowskis and Tom Tykwer pulled off an impossible feat by adapting David Mitchell’s “unfilmable” novel, and the result is one of the most dense, interesting and arresting films of the year.  Cloud Atlas is a miracle of film editing, as the three talented directors masterfully weave six semi-related stories into one rich tapestry of a film.  This is a movie that can effortlessly flow from heartbreaking romance, to high spirited comedy, to thrilling post-apocalyptic action, and leave you so invested you can’t pull away long enough to be impressed.  The creative flourishes, especially the recycling of actors throughout the six tales, has been polarizing, but even when the result looked odd, I really dug the ambition and vision the Wachowskis and Tykwer put forth, and the result is one of the year’s greatest cinematic achievements. 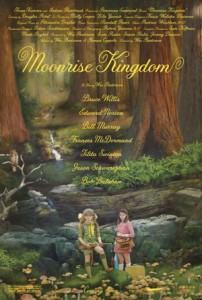 Between The Fantastic Mr. Fox and now Moonrise Kingdom, it feels impossible there was a time I was ready to give up on Wes Anderson.  His latest is one of his best films yet, and utterly charming coming of age story that lets the director combine his existent creative drives with the same sense of whimsy he captures for his stop motion Mr. Fox.  Jared Gilman and Kara Hayward are beyond incredible as the kids who escape their sleepy New England home, and their awkward yet adorable presence anchors the entire film brilliantly. 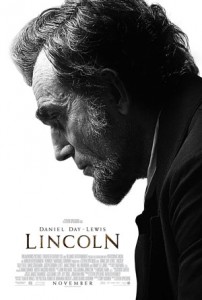 Steven Spielberg’s long in the making feature on our 16th President did not disappoint.  Using a steadier hand, with very little of his typical heartstring-tugging, the legendary director and Daniel Day Lewis as Lincoln lead an astonishing ensemble cast through the small window of the president’s crusade to pass the 13th Amendment and end slavery.  Some of the most thrilling wars caught on screen this year were wars of words, many inside Lincoln’s private quarters and the halls of the House of Representatives, and the keen insight into the procedures, debates and underhanded stunts that make up the workings of American politics were a thrill to watch unfold.  When the Amendment is finally passed in the House, it feels earned and electric, and you quickly realize that Lincoln is less a historical drama than a highly relevant film about how politics really works. 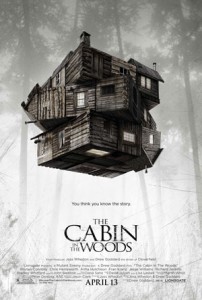 In a scene where most horror movies feel completely by the books, Cabin In The Wood’s meta-take on the genre was a much needed breath of fresh air.  Here is a smart, utterly entertaining horror flick that gets it all right– you’re as invested in the likeable cast as much as you are the carnage and bloody chaos that befalls them.  And Richard Jenkins and Bradley Whitford as the engineers of said chaos are so cool, they’ll leave you begging for more.  There are layers going on here that really make a statement about why horror movies are cool– and why we love them– that’s expertly woven into this fun, fast and often hilarious story.  And the escalation into madness that is the last act of Cabin left me completely in the dark for what was going to happen next… but I knew I wanted to see it unfold.  This was my favorite movie of the year. 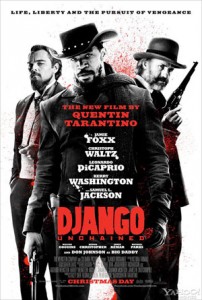 Quentin Tarantino’s “Southern” is brilliant and sprawling and completely and utterly watchable.  The story of Django, freed slave turned bounty hunter, moves in some unexpected directions, focusing less on bloody revenge than classic Western romance as Foxx’s amazing hero searches for his enslaved wife Broomhilda.  As Django’s partner and mentor, Christoph Waltz’s Dr. King Schultz steps up to the seemingly impossible challenge of creating a better character than the actor’s own Col. Hans Landa from Inglorious Basterds, but he pulls it off– Schultz may be the best character Tarantino has ever created.

That doesn’t even begin to touch the surface of the great performances from the likes of Samuel L. Jackson and Leonardo DiCaprio, or the dialogue that’s as razor sharp as you’d expect from a master like QT, or the beautiful, bloody action that merges the worlds of exploitation cinema and spaghetti western.  There’s a style and hipness to Django Unchained that seems stronger, clearer and more pure than anything else Tarantino has made, delivering on the promise of Death Proof— here we see Tarantino not at all paying tribute to the timeless cinematic genre classics he loves so dearly, but crafting his own entry into that pantheon.  Django is a particularly great movie from a director known for making great movies… and it’s the best film of 2012.

There were lots more great films in 2012, which made it very tough to pare down to just ten of them.  I’d feel like a bad person if I didn’t give an honorable mention to some other great movies from this year– Detention and The Raid: Redemption both had a kinetic energy that made them totally compelling to watch, with next-level editing and action beats that I can only hope will spark a new generation of filmmakers.  Argo was the best work we’ve seen yet from Ben Affleck, who pulled off the impossible task of creating edge-of-your-seat suspense… in a story we already know the ending of.

Skyfall was a great addition to the litany of great James Bond films, the best of Daniel Craig’s modern run by leaps and bounds.  Wreck-It Ralph and ParaNorman were both charming and nostalgic, hands down the two best animated features we saw all year.  And I don’t think any movie surprised me more than 21 Jump Street, a reboot with just the right amount of raunch and meta-humor… Magic Mike was the most talked-about role for Channing Tatum this year, but 21 Jump Street is what finally made me a fan.