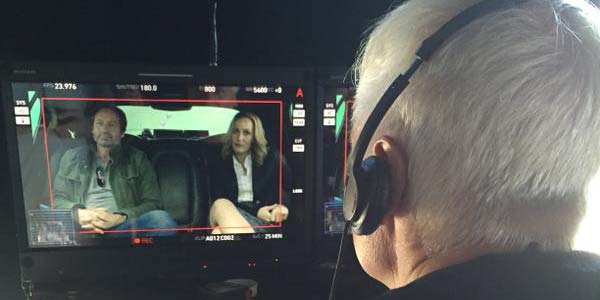 They’re just sitting there, and giving me all the feelings.

So the X Files reboot is currently filming, and we’ve got our first look at Agents(?) Mulder and Scully, as they will appear in the new series.  I’m sure there are clues to parse out from this seemingly-benign picture, but to be perfectly honest seeing David Duchovny and Gillian Anderson together on screen again triggers more warm feelings than any desire to unlock possible facts hidden within this picture.  I’ll leave the conspiracy stuff to the experts.

As for the looks of our heroes?  Scully certainly seems to be the better dressed of the duo(no big surprise there, AmIRight?)… and I dig Mulder’s five o’ clock shadow.  And maybe it’s just the lighting, but did Dana Scully go blonde since last we saw her?

I can’t wait for the return of The X Files.  The nostalgia factor is high, for sure, but I like the fact that these two are not the same people we met back in Season One.  And I love the talent this reboot series has recruited behind the scenes… it’s basically X Files All-Stars, minus Vince Gilligan.

What do you think?  How are you feeling about the return of The X Files?

EXCLUSIVE: Your first look at Mulder and Scully! #TheXFiles pic.twitter.com/UexSfktTbA