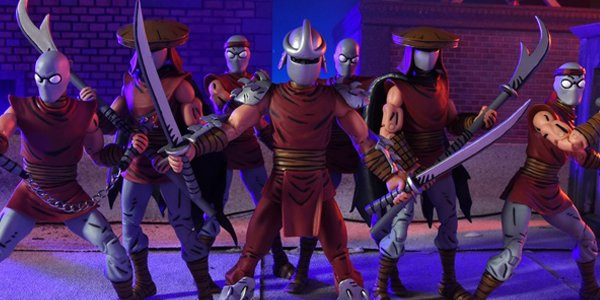 NECA’s arcade game Ninja Turtles are some of the year’s best action figures, though there was something bittersweet about the Foot Clan set. Those pixelated villains used sculpts from the long-lost second series of Mirage Comics-inspired TMNT figures which NECA was forced to abandon years ago. Photos of those incredible prototypes never really settled down on the internet (or in my brain, for that matter), but after all this time it seemed there was no hope they would ever see the light of day.

But once again, NECA surprised me, announcing the figures as their New York comic Con exclusive!  The set will be a four-pack, not unlike the arcade figures, and will include The Shredder, the Foot Elite Guard, and two variant Foot Soldiers, each sporting unique weapons and that glorious, ink-heavy deco which makes them look like they just stepped off the comic page (and became full color, to be fair).

Best of all, though– unlike the arcade exclusives, the Mirage Foot box set will also be available in limited quantities for those not attending NYCC!  Preorders kick off this Thursday September 8th at 1pm EST at TheNECAStore.com.  Get your wallets ready…

At last the Eastman & Laird Villain set is coming! NYCC & available to ship to non-attendeeshttps://t.co/WxyrsA8au6 pic.twitter.com/0V4ZN9tygx