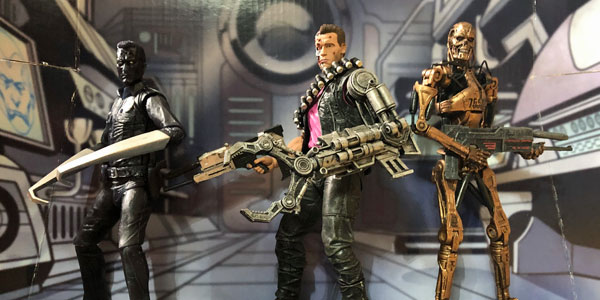 Judgment Day AND the Future War return to the toy aisle, thanks to NECA’s great new wave of Kenner-inspired Terminator action figures.

Probably my favorite subcategory of toys released by the always-excellent NECA is their ongoing Kenner tribute collection. These figures, which have surfaced in the Predator, Aliens, RoboCop and now Terminator collections draw from the absolutely bonkers early 90s toys made by Kenner. The lion’s share of the subseries has been based on Aliens and Predator, but the latest releases are a trio of Terminators, each based on a delightfully gimmicky killer robot first released in toy form nearly 30 years ago.

The Kenner Terminator lineup features Power Arm Terminator, the hands-down star of the original 90s toy line, Metal Mash Terminator, from the later Kenner waves under the “Future War” banner, and White Hot T-1000, a color changing variant of the liquid metal killer. Before we get to the figures themselves, I have to take a moment to highlight the awesome packaging for these figures, which perfectly replicates both the “Terminator 2” and “Future War” card art from the Kenner line. Both designs are eye-popping, and really stand out on the shelf… and sport plenty of fun 90s nods like the “extreme” font name cards and action feature blurbs for each figure in unapologetic neon text. Unlike the Predator and Aliens figures, these Terminators feature a fully unique and all new style packaging, a blister bubble with backer card, that gets the closest to the Kenner originals as anything NECA has done to date.

Onto the figures themselves– they’re pretty great! Two of the three are straight repaints, but the new paint apps really make them feel unique. This is especially true for Metal Mash, an Endoskeleton with a copper and black finish and a numerical stamp on its chest signifying this Terminator as part of the resistance. The colors are very cool, and the Endoskeleton sculpt retains all the positives– the intricate sculpt which captures every wire and piston in the cyborg’s body– and negatives, specifically the limited articulation in the neck, abdomen, hips, and ankles.

White Hot T-1000 is the other direct repaint, cast in deep navy blue plastic with silver highlights (including the piercing eyes, which almost seem to “glow” against such a dark backdrop. This T-1000 retains the vintage figure’s action feature, meaning he changes color when exposed to heat, turning a much lighter blue to illustrate his heating up. Exposure to cold reverts his colors back to the darker, normal tone. Unlike the Kenner release, this figure is sculpted to look like Robert Patrick’s character entirely (the older figure featured a split-down the middle-aesthetic, with half looking like the cop, and the other half featureless liquid metal. The NECA figure also diverts from the original due to coloring, as the Kenner toy changed from black to whitish gold, not blues. I’m curious why NECA made the choice to change the colors with this guy, but hey– if they figured out a way to make the action feature still happen, I’ll take it! The T-1000 includes alternate hook arms, an alternate trigger finger hand, and a pistol that fits in his holster.

Much like the vintage figure, who became the de-facto star of Kenner’s series, NECA’s Power Arm Terminator is the standout of this already excellent series. The parts use is very smart, incorporating Dutch from Predator’s bare, beefy arms onto the T-800 body, to match the classic figure’s sleeveless look. While most of this design was fairly movie-accurate (black pants, black leather jacket/ vest), he also sports a bright pink shirt, an accent that immediately draws the eyes. The other visually striking aspect of this figure is the incredible all new sculpt for the titular Power Arm, a mass of imposing metal that looks like an Endoskeleton arm on steroids. It’s a very fun sculpt very reminiscent of the Kenner toy but with an intricacy and level of detail we’ve come to expect from NECA. The Power Arm even features two swappable weapon attachments, including a functional capture claw and a missile warhead. He’s missing the RoboCop-esque finger spike which the vintage toy also included, but that feature at least gets a nod on the figure’s back of card bio.

Despite the great new tooling on Power Arm, fun action feature on the T-1000, and wonderful new deco all around, the Kenner tribute Terminators are being released at a lower than average price for NECA figures. They range between $20 and $24 per figure, which is an absolute steal for what you get. It’s obvious how much fun NECA had crafting these figures, and between this trio, the SDCC exclusive Endo Glow Terminator released a few years back, and the standard movie-style Endoskeleton and John Conner (who had direct analogs in Kenner’s collection), we’ve already got a healthy start to modernizing that toy line in NECA style. I’d love to see them revisit more of Kenner’s absurd, outlandish, and sometimes just plain silly Terminator toys. There are some vintage toys I think NECA’s crew would have an absolute field day re-creating.

The Kenner tribute Terminator series is available now at Target stores, specialty retailers, and via NECA’s eBay and Amazon stores. 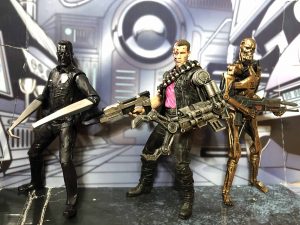 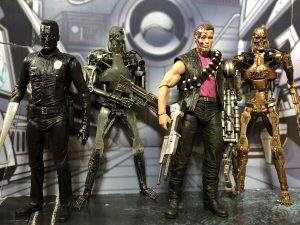 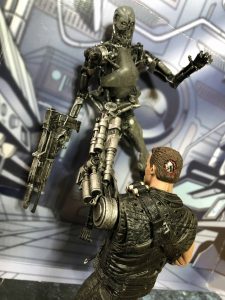 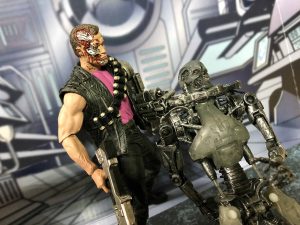 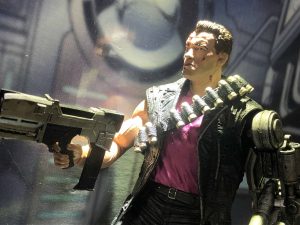 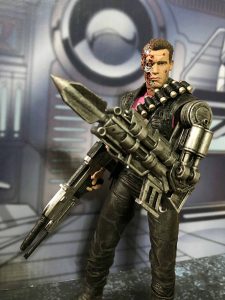 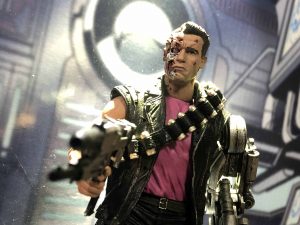 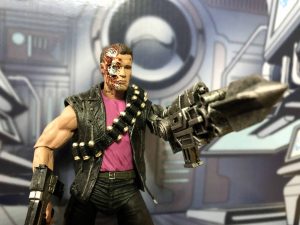 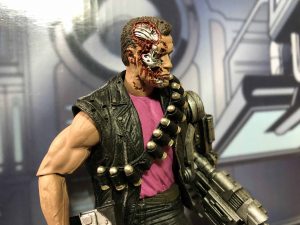 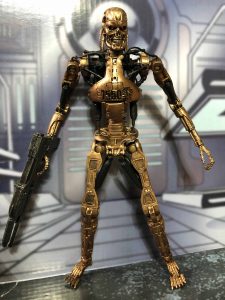 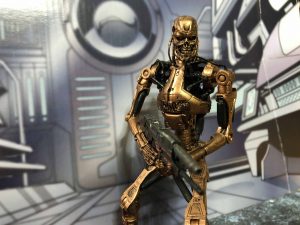 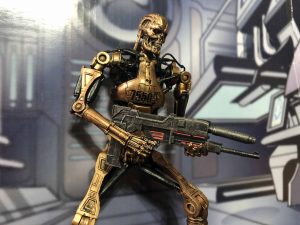 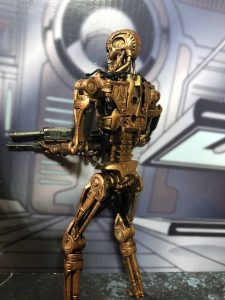 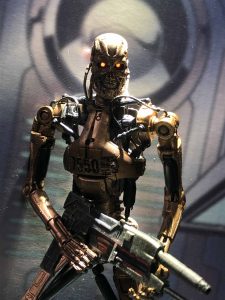 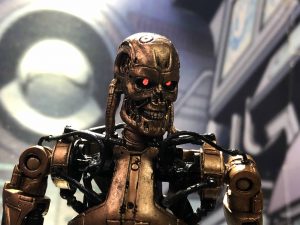 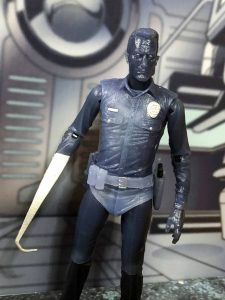 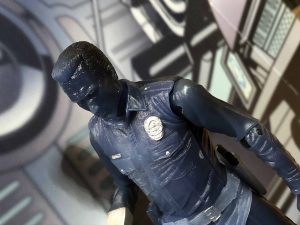 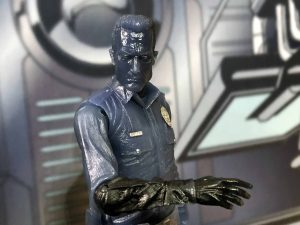 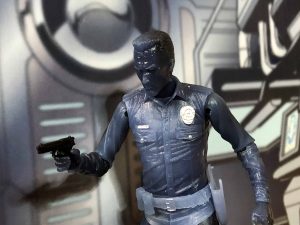 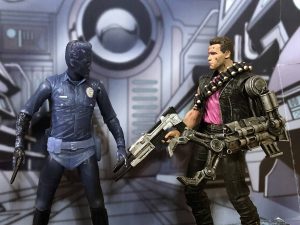 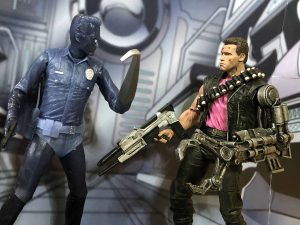 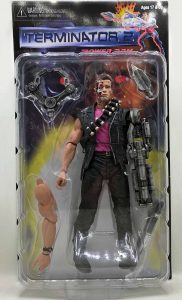 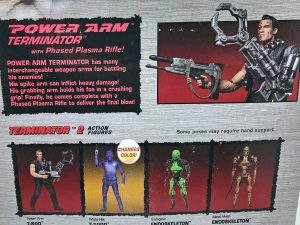 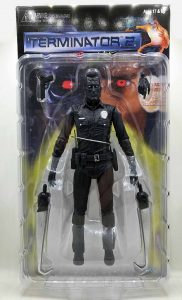 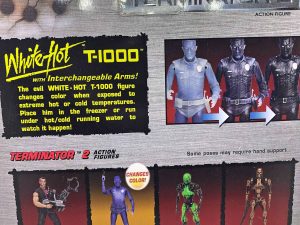 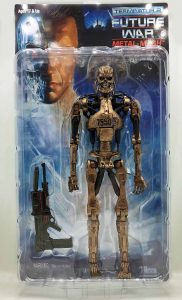 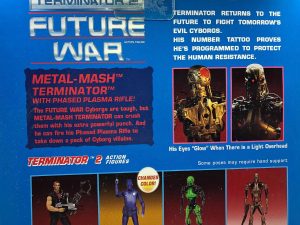