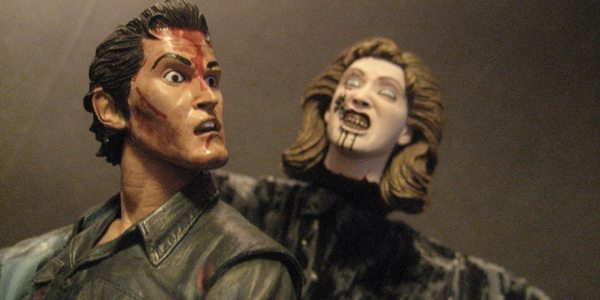 To celebrate the 25th anniversary of Sam Raimi’s cult classic Evil Dead 2, NECA has released a new series of 6″ scale action figures. The first wave is hitting stores now, and gives us two versions of the movie’s iconic star Ash (played, of course, by fan favorite Bruce Campbell). The lunk-headed hero has a definite place in many a fanboy’s heart, and NECA’s new figures– based on the movie’s “Farewell to arms” and “Deadite Ash” sequences, are far and away the best renditions of the character ever to see release. Thanks to NECA we have the chance to get an up-close look at both new versions of Ash… check out the review for the full scoop!

I love the Evil Dead series. After all the years it still holds up as a definitive example of cult classic movies. Evil Dead 2 has something for everyone– plenty of classic horror, buckets of gore, amazing practical effects that still hold up over two decades later, slapstick comedy on par with the Three Stooges… and in the center of it all is the perpetually down-on-his-luck hero/ doofus Ash. Bruce Campbell’s star-making role is one of the modern greats, and stands shoulder to shoulder with other iconic 80’s movie heroes, but with a snarky twist– he’s sarcastic, clever and badass but he’s also an idiot. As the beleaguered tough guy must think on his feet to survive the legions of the Deadites, and his less than stellar decision making leads the way for plenty of classic cinematic moments. And with a central star as awesome and beloved as Ash, it makes absolute sense that NECA would kick off their new line with two all-new takes on the hero. 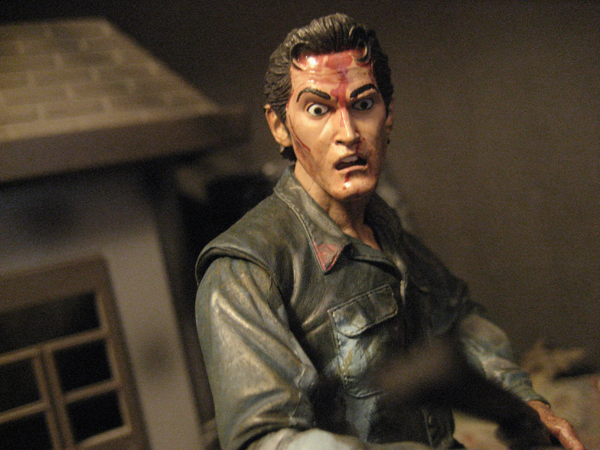 “Farewell to Arms” captures Ash during and after the infamous possessed hand scene, in which a demon takes control of Ash’s hand and tries to kill him, forcing Ash to chop off his own limb. The figure portrays Ash in his traditional look of a blue shirt and brown slacks, with some excellent paint apps to show off the mud and grime our hero has been dragged through (literally) by this point. The differences in color, shade and texture (with glossy overcoats on the mud and blood) give the figure a wonderful realism, and he looks like an absolute mess. Ash includes two swappable arms, for a before and after option– the first includes our hero’s possessed demon hand, and the alternate features his post-chopping wrist stump, complete with a grimy makeshift tourniquet. The arms can swap very easily and hold in place well. The joint is nice and sturdy, which makes me confident that the arms can be switched around as often as desired without risk of breakage. In fact, all the joints on Ash are perfect– he’s pretty packed with articulation including a ball jointed head in the grand NECA style, ball shoulders, elbows, wrists, knees and ankles, hip cuts and a very cool ab crunch hidden underneath his soft vinyl shirt. All the points of articulation make for plenty of cool posing options, both fighting his own hand in a deathmatch, or propping his shotgun on his arm stump ready to take the fight to the nearest Deadite. In addition to the alternate arm and shotgun, Ash also comes loaded with a severed version of the evil hand and his hatchet. I love the amount of accessories included here, although I did find it a little difficult for Ash to grip his hatchet, as the demonic hand is opened to flare its claw-like fingers and the other hand is opened wider to accommodate holding the shotgun, which he does very well. 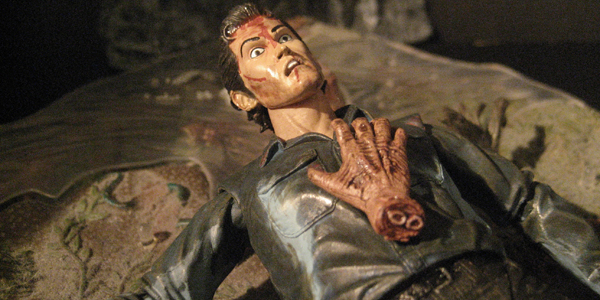 I think the most divisive part of the figure for many fans and collectors will be the headsculpt. NECA opted to go with a slightly exaggerated portrait, which has a very slightly cartoonish look. And I absolutely love it. Past versions of Ash have been more strapped to photorealism and came across a little dull, but the expressiveness of this face sculpt is perfect for the character, and fits brilliantly in the overall look and feel of not only the figure but the cartoony source material. Bruce Campbell has an expressive face, with the lantern jaw and totally expressive eyes, and but stylizing these features just a little, the new figure really drives home the clueless/ terrified/ ass-kicking personality of our hero. 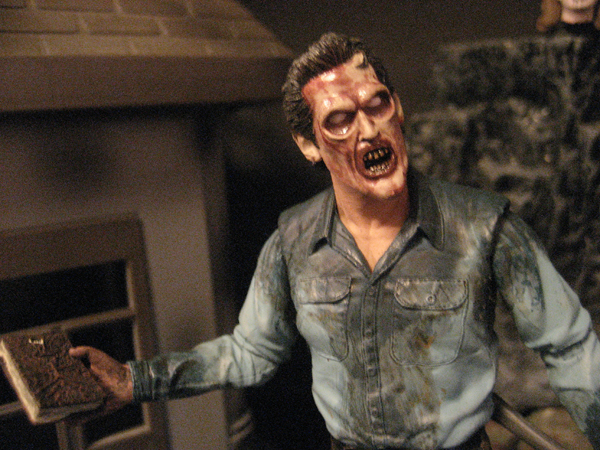 Deadite Ash depicts out hapless hero as he is briefly possessed by evil demons, and features an excellent portrait typical of Sam Raimi’s unique demonic design, with large white globe-like eyes and a gaunt, stretched face with an exaggerated lantern jaw, hollow eye sockets and– of course– plenty of nasty gore covering the face. Ash is once again given a paint application that conveys a grimy, nasty outfit, having been dragged through blood, mud and all kinds of unpleasantness by this point. Deadite Ash includes fewer accessories, but the ones he’s packing are top notch. This version of our hero comes packed with the broken reel to reel, a phenomenally sculpted Necronomicon, and the severed, Deadite head of Ash’s poor girlfriend Linda. Since Linda goes headless for a majority of the movie, the head is almost a second figure/ character here, and the sculpt is dead-on to her corpse-devoid undead appearance. There seems to be a semi-variant depending on paint apps, with Linda sporting either all-white eyes or pale blue pupils. Both look good, and even after pouring over the movie I still couldn’t really tell which was movie-accurate.

As a long-time fan of the Evil Dead series, I couldn’t be happier with how NECA’s new Ash figures turned out. With enough articulation to pull off a healthy amount of poses, excellent sculpting overall (especially the expressive and subtly stylized heads), and tons of accessories and movie-accurate details, it’s pretty safe to call these the definitive Ash figures for my money. When it comes to awesome toys based on the Evil Dead, NECA is clearly wearing the crown– hail to the king, baby! Thanks again to NECA for letting us check out the Evil Dead 2 series one figures. Look for your Ash figures at Toys R Us, comic book shops and many e-tailers online.