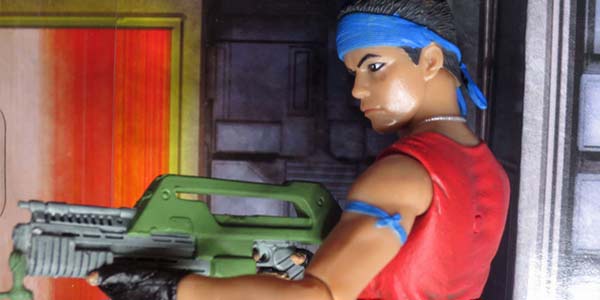 In advance of Alien Day 2017, NECA teased that they would release a compliment to last year’s Kenner style Space Marine Ripley, and true to their word, this year saw the release of a similar Kenner-inspired variant of Vasquez.  Many NECA Aliens collectors– myself included– sort of figured this figure was waiting in the wings, considering the fully sculpted tank top included on last year’s cinematic Vasquez figure, and sure enough, she’s our second human in the Kenner sub-series.

NECA’s toyetic Vasquez is pretty great. She features the same incredible sculpt as the 2016 figure, which is loaded with articulation and an amazing likeness of actor Jenette Goldstein, but now cast in the blue bandana, red top, and grey pants of her predecessor from Kenner’s early 90s toy line. This Kenner style Vasquez may not include the vintage toy’s rocket launcher backpack, but she does come packed with a smart gun painted in an aesthetically appropriate light green deco.

There’s a couple specific things to love about the Kenner Vasquez figure. First are her newly tooled pieces, which are not dramatically unique, but still a clear sign of nailing it at every opportunity with this nostalgic micro-series of figures.  While the cinematic smart gunner sported arm bands on each bicep, the Kenner Vasquez only includes this detail on her left arm, just like Kenner’s original figure.  And she includes the knife and sheath on her leg, just like the old school toy… which also provides an additional accessory for NECA’s new creation. 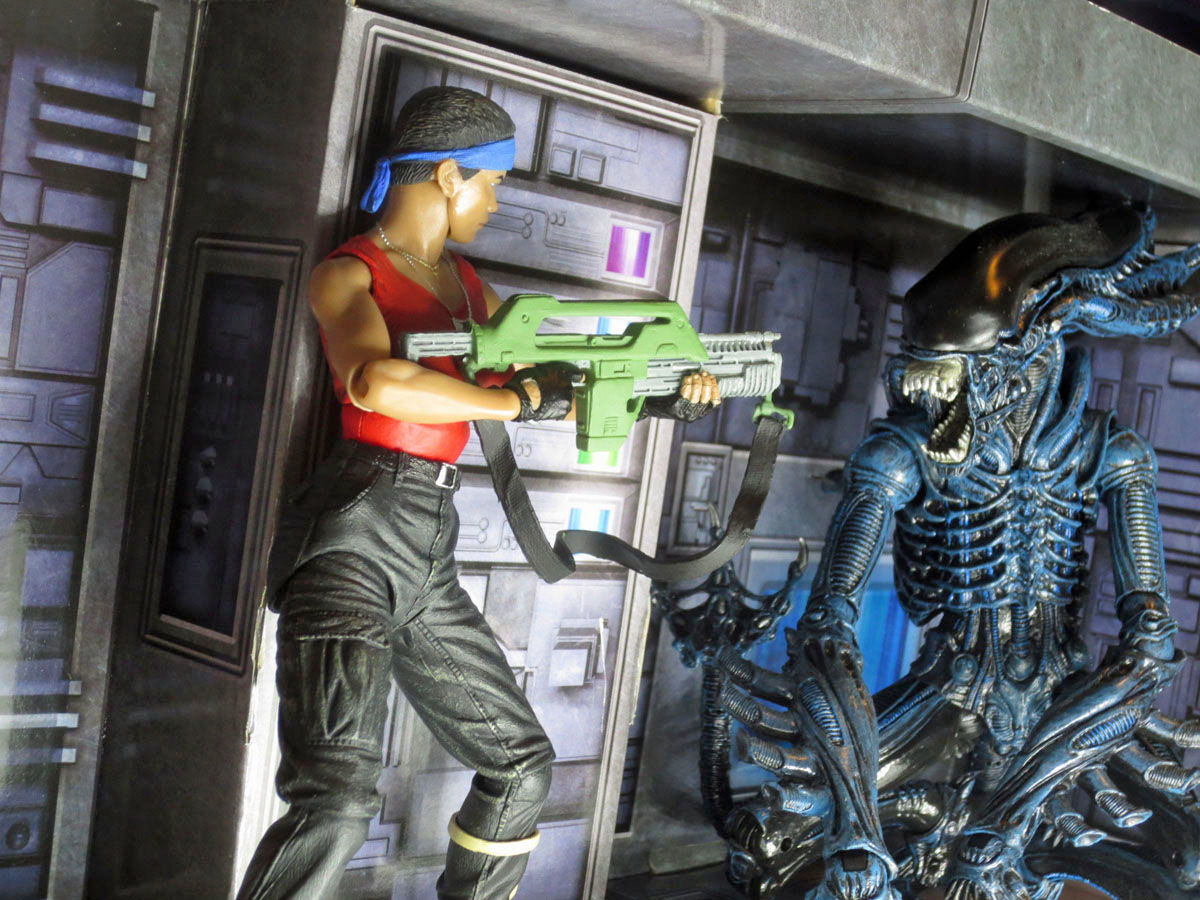 These small tooling choices fill me with lots of confidence that, when and if NECA tackles Kenner versions of the other “Space Marines” like Hicks, Hudson, Drake, or Bishop, they will find a way to commit to the new tooling necessary to make those wild designs fit into their current cinematic Aliens universe.  It makes me feel very confident in NECA’s ability to do the strange, much-revered Kenner sub set of toys justice within the greater Aliens property.

In addition, the Kenner Vasquez actually improves on the cinematic first release of the character, with the inclusion of her teardrop tattoo. The lack of this paint app was about the only strike I could pose against last year’s release, and it’s nice to see NECA has addressed this omission… even if only on their Kenner variant figure. I’m confident we’ll see an “ultimate” Vasquez box set sometime down the line, which will add the tattoo to the movie style figure… possibly in a two-pack with her partner Drake? That’s a shot in the dark, considering NECA has yet to announce any iteration of the Marines’ second smart gunner in their toy line, but I can dream, right?

For the time being, Vasquez makes a great second human addition to NECA’s Kenner Alien tribute collection. While a Kenner-style Hicks might have made more sense logistically, Vasquez offers a means to expand the property’s welcome pro-feminist theme.  The entire Alien franchise can easily be interpreted through a feminist lense– it’s the story of a lone female survivor facing an entire race of beings intent on having their way with her, while she resists– so adding a second strong female character to the opposition feels like a smart, empowering choice.

NECA’s Kenner style Vasquez is available now, exclusively through the NECA Store online. She’ll be joined by more Kenner-inspired Xenomorphs later in 2017… and hopefully, by a Kenner Space Marine Drake next April on Alien Day. 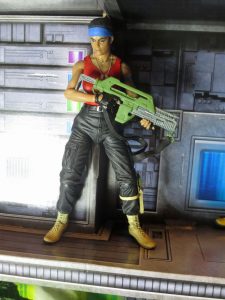 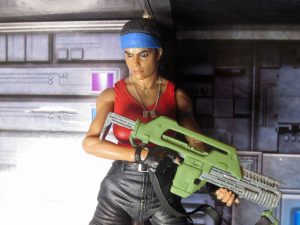 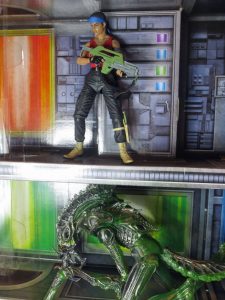 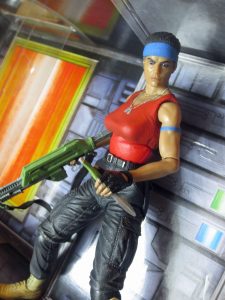 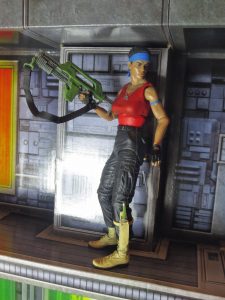 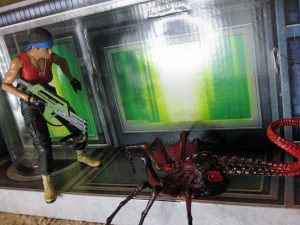 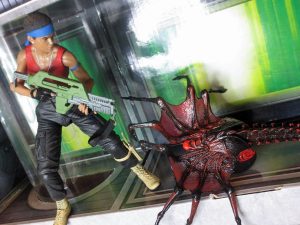 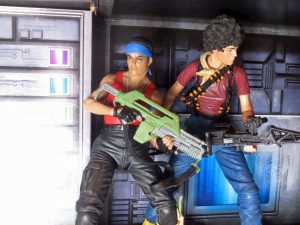 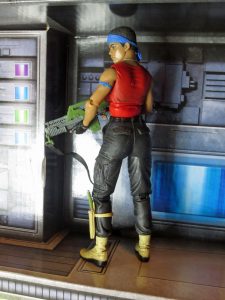 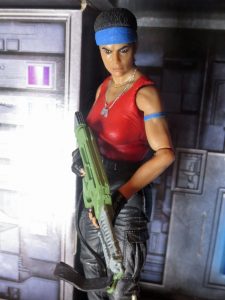 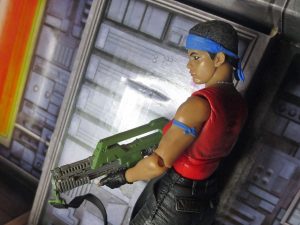 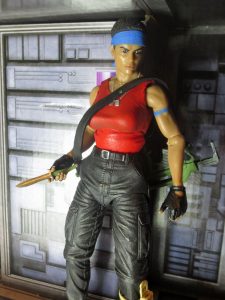 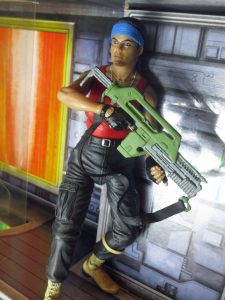 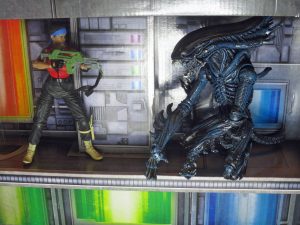 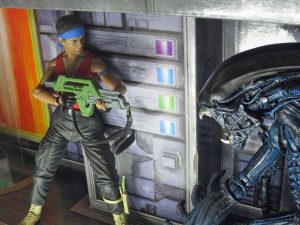 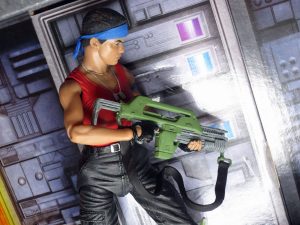 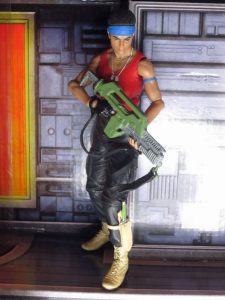 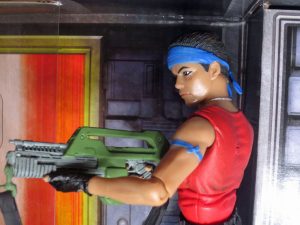 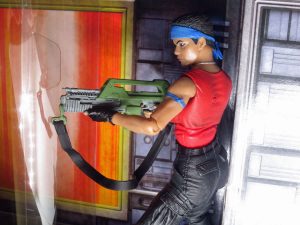 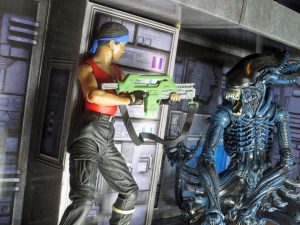 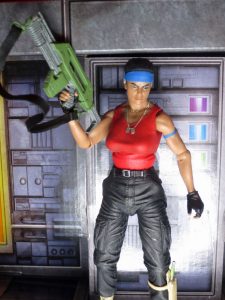 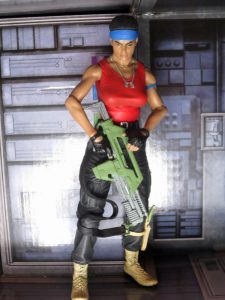 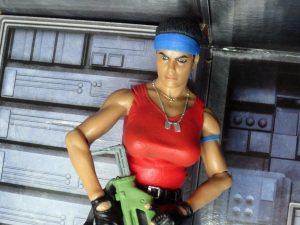 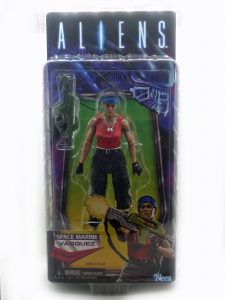 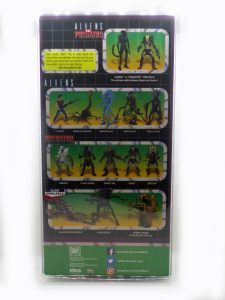