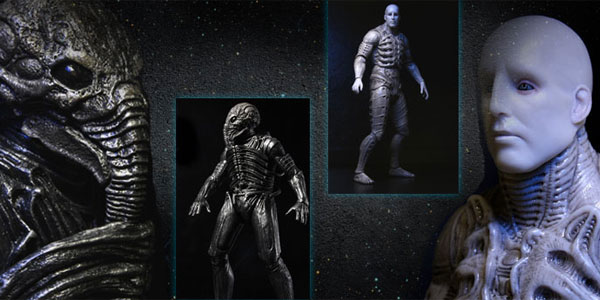 The first wave of Prometheus toys will be released in just a few weeks courtesy of NECA, and the company has now revealed some new images of the first figures, as well as the final package images.

I was not a fan of Prometheus. Ridley Scott’s return to sci-fi was all (admittedly very nice) imagery and no substance to back it up… it was one of the Summer’s biggest disappointments to me. However, Prometheus was also a movie that inspired its fair share of debate, and I believe that a movie which could inspire the amount of discussion Prometheus did can’t be all bad.  One of the topics that has come up several times, as a toy collector, is whether to buy figures from a movie I didn’t like.  And I still hold strong that, my feelings on the movie nonwithstanding, I’m totally excited for NECA’s new toy line. 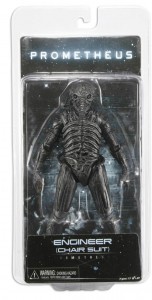 What Prometheus really got right, above all, was a fantastic visual design, and that style is being translated into the upcoming toy line perfectly. NECA is the best it gets for movie-accurate toys, packed with faithful detail, great likenesses and enough well-designed articulation and accessories to still feel like toys, not statues. The Prometheus line will launch with two versions of the Engineers, the meat-head creators of all life on Earth (and were previously known as the iconic Space Jockey from Alien)– the giant demigods are featured in their two movie looks, the full Jockey-like Chair Suit, and the simpler Pressure Suit.  Both figures look excellent, with the great, bio-organic texture of their suits pulled off perfectly. What’s even better is NECA’s commitment to scale– the Engineers will clock in at over 8″ tall, leaving them in correct scale with the company’s many other movie-based toy lines… and guaranteeing both of these guys will be BIG figures!

I like the relatively simple card art for these guys as well… the sealed door clogged up with the pile of Engineer bodies was one of the film’s most striking visuals, and it works great as a background image– intriguing without taking away from the figure itself.  I doubt I’ll be a completist for the Prometheus line… while NECA’s sculpts look phenomenal across the board, I really hated the movie’s design of the stupid proto-Alien, and while I get that the company can get a lot more traction out of the male space suit body in this line, it seems silly to release the pointless Charlie Holloway while we have yet to see our protagonist Elizabeth Shaw show up in toy form.

Prometheus Wave One will hit shelves in early September, with more figures to follow closer to the end of 2012. Expect reviews for the first series as soon as they hit. 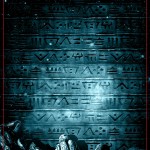 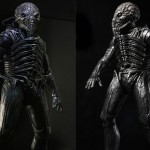 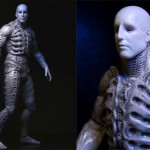