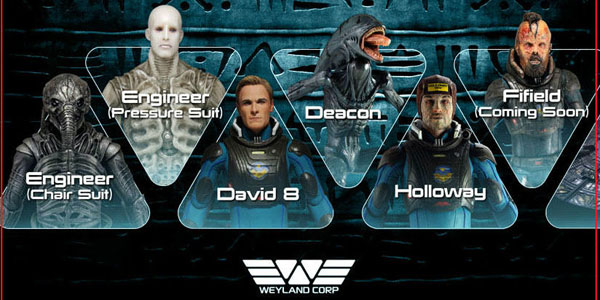 NECA took fans behind the scenes via Twitter with previews of upcoming toys from Prometheus, Predator and Wave 3 of the Mogwai from the Gremlins series.

There aren’t many toy companies that communicate with their fans as well as NECA, and they have recently taken to Twitter to show off lots of great work-in-progress sculpts, and new figure reveals.  Helmed by Product Manager (and all-around swell guy) Randy Falk, the NECA Twitter feed is packed with lots of cool content to get your geeky blood pumping, as well as some cool insight into the company’s development process.

Recently, NECA featured a massive batch of posts which revealed production images of the upcoming third wave of Mogwai from the Gremlins collection, as well as work in progress samples of Predator Series 7, and a major update on the future of the Prometheus line, with character lineups for waves Two and Three– including confirmation that we will be seeing Noomi Rapace’s Elizabeth Shaw and Charlize Theron’s Meredith Vickers in the series shortly.

BTS – first painted Samples of Predators Series 7 directly from the factory, these are not final, but close pic.twitter.com/GJjRNUwE— NECA (@NECA_TOYS) October 24

BTS – First samples of painted Mogwais Series 3, all based on the original 1984 Gremlins. *not final deco pic.twitter.com/blElSvBJ— NECA (@NECA_TOYS) October 24

BTS – seems you’re loving the Prometheus figures so far. Here is a look at what is to come in Series 2 and beyond pic.twitter.com/8ctEnp24— NECA (@NECA_TOYS) October 24

It’s awesome that NECA would be this open with so many aspects of their projects, and they’re always good for an interesting read on Twitter.  Get in on the fun and Follow NECA on Twitter now– Click Here!