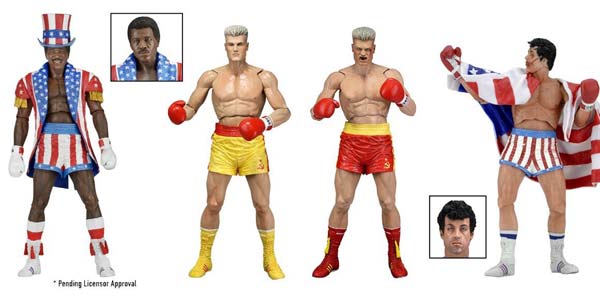 Rocky Balboa gets an upgrade, Apollo Creed gets some new digs, and Ivan Drago gets a reissue in the second wave of Rocky Classics.

The first series of Rocky Classics action figures are just starting to hit, and NECA is already giving us a look at the second wave.  Based on the best/worst installment of the franchise, Rocky IV, this set includes four figures– Rocky, Apollo, and two alternate versions of Russian fighter Drago.

Technically, this Rocky is an unofficial “Ultimate” figure, since he follows the same format as those releases– he’s mostly a resculpt of the previously released figure, but now includes two alternate heads, and a newly repainted rubber American flag (the original came packed with the retro video game Rocky) to drape across his shoulders just like the movie poster.

Apollo is the one totally new figure in this lineup, and he is fantastic.  Sporting his patriotic top hat and vest, the champ’s absurd sense of style is matched perfectly with the cheese-eating grin on his face.  It’s a great sculpt, to be sure… and of course, he also features a more serious alternate headsculpt, which can be used when he realizes fighting Drago is no laughing matter.

The best news?  All these Rocky figures will feature the casted flesh tone technique NECA has used for many of their previous boxers, which adds a sweaty realism perfect for these characters:

yes!! these are prototype images, final products will all use the fan favorite casted flesh tone technique https://t.co/CGsIirO0vH

After the Rocky IV wave hits later this year, NECA still has plans for two more waves of fighters… who do you want to see next? 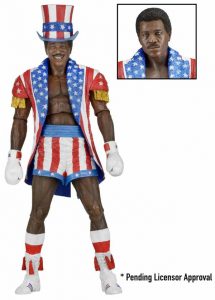 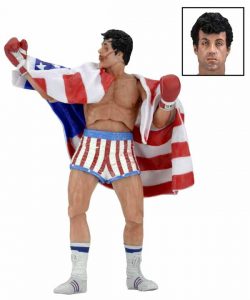 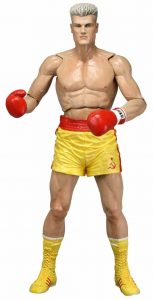