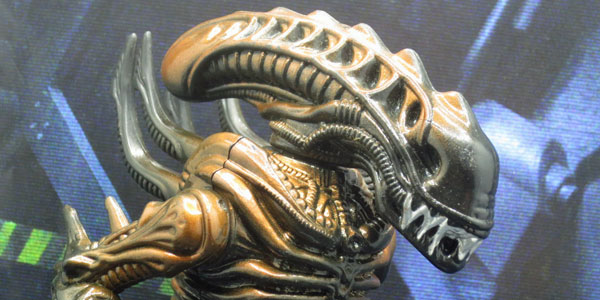 Check out concept art for NECA’s take on one of Kenner’s coolest vintage Aliens toys!

It’s been a while, but NECA finally started up their #FacehuggerFriday teases, with sneak previews and more fun hints at the future of their Aliens toy line, right before the weekend.  Their latest is a piece of concept artwork for one of the creatures coming in 2018’s Series 13, which will be another wave inspired by Kenner’s Aliens figures from the 90s.

More specifically, it’s the Scorpion Alien, appreciated in the Kenner era as the closest to a screen accurate Xenomorph we got for the first few waves of the collection. It also featured a rad “exploding” feature which fragmented the beast into four pieces (acid blood not included). There’s no word on whether NECA’s Scorpion will emulate that action feature in any way, but the artwork certainly looks badass:

Something new to whet your appetites for Series 13 courtesy of @Beast_SculptKit David Silva for #facehuggerfriday pic.twitter.com/XhqcGQtmRJ

This illustration comes from David Silva, who’s been involved with many of NECA’s finest toys, as well as his own eagerly anticipated Beasts of the Mesozoic, which promises to be THE definitive dinosaur toy line of all time.

We’ll likely get to see the Scorpion Alien– and hopefully the rest of Aliens Series 13– at Toy Fair next February.  I can’t wait!