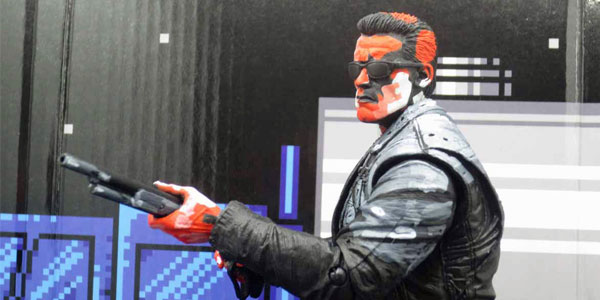 The Terminator joins the retro video game collection as NECA pays tribute to the lesser-known Terminator 2 NES game from LJN.

The hyper-stylized retro game toy line from NECA is rolling on, and the latest addition to the series is a T-800 Terminator figure, with a new deco based on LJN’s T2: Judgment Day video game, released at the tail end of the relevance of the 8-bit Nintendo Entertainment System.  While this video game pales in comparison to the far-superior T2: The Arcade Game (released as an arcade cabin, as well as on next gen home systems), it’s hard to argue with NECA’s choice for source material because this pixelated variant of Arnold Schwarzenegger’s killer robot-turned-protector fits in seamlessly with the rest of the retro game toy lineup.

Our new T-800 reuses the fantastic Ultimate Terminator base, which features all the sculpted detail of NECA’s best Terminator action figures, along with the improved range of articulation first seen in last year’s deluxe figure.  The new paint apps utilize the monochromatic, blocky edges seen on past retro game figures– in this case, the Terminator’s skin is a bright red base opposite stark whites and blacks to represent both shadows and the android’s metal exoskeleton, exposed beneath the damage face on one of the two alternate headsculpts included with this release.  The remainder of the figure is painted in a subtle yet effective mix of solid black, with highlights in white and two different tones of grey.  Our end result is eye-catching and odd, and the simplified, stylized deco offsets very nicely against the hyper-realistic sculpt of the figure. 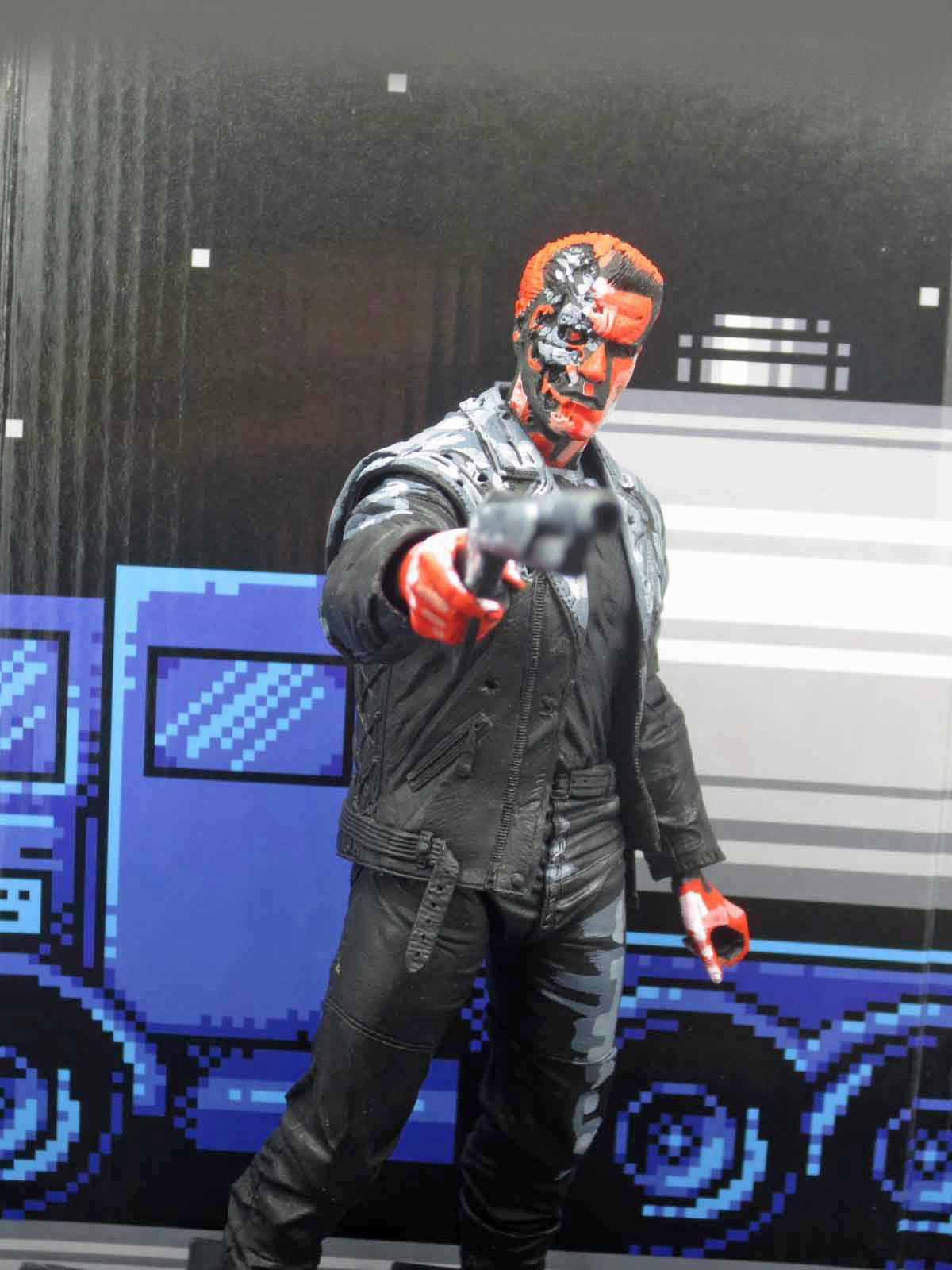 The Terminator is fully articulated, and includes his signature shotgun in addition to the alternate head sporting sunglasses.  While I was concerned that the full articulation would be made moot by the seemingly pose-specific highlights added to the figure’s paint work, in reality this T-800 looks great in a variety of poses, as the white and grey highlights tend to pop regardless of the pose of the figure itself.

Like the other retro game figures, the NES Terminator comes packaged in a fifth window box, which replicates the packing of the vintage NES game.  The front cover features key art from James Cameron’s 1991 movie, within the same layout as the original LJN game cover, and the back mimics the game’s design, while adding a few fun changes such as this great line (written in comparison between your character and the T-1000 you will fight during the game):

You carry a level-action Winchester.

It’s made of liquid metal.

This entire sub-line of figures has grown into one of the coolest offerings from NECA (which is truly saying something for a company this cool), and the NES Terminator is no exception.  The figure’s film-accurate sculpt remains fantastic and incredibly well designed, and the 8-bit paints app deco courtesy of Jon Wardell make this figure both uniquely stylized and perfectly modeled after his 8-bit source material.

Look for the retro game Terminator at Toys R Us, your local specialty retailer, of via NECA’s eBay Store. 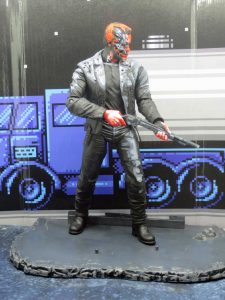 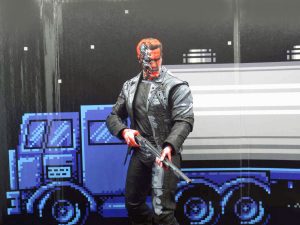 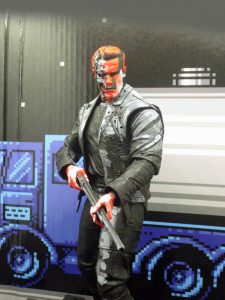 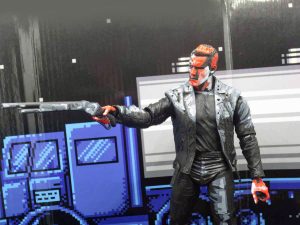 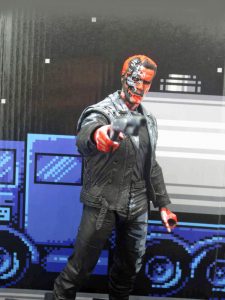 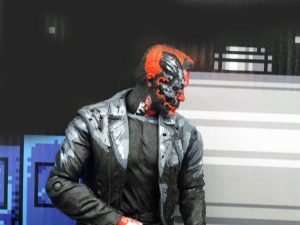 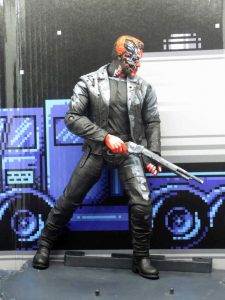 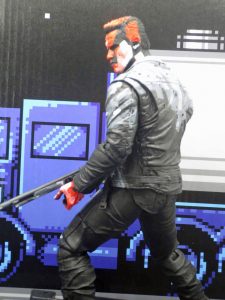 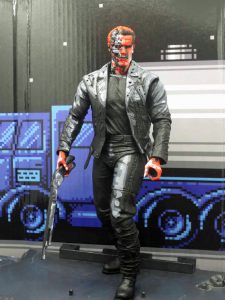 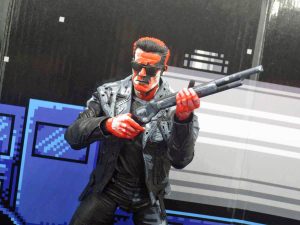 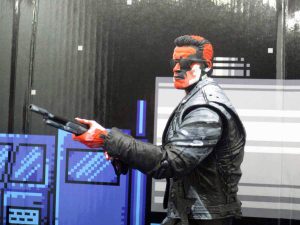 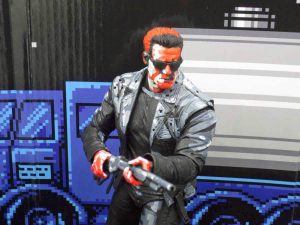 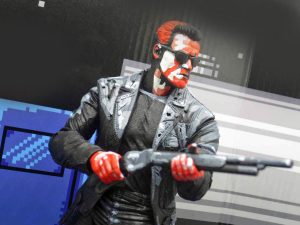 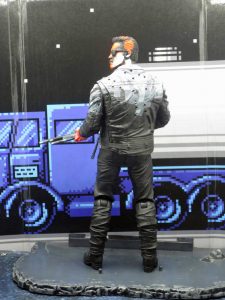 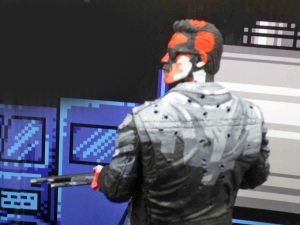 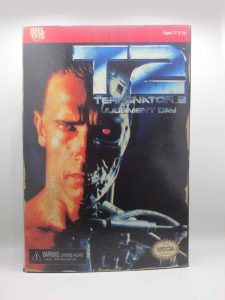 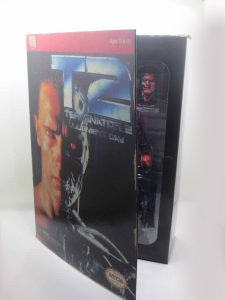 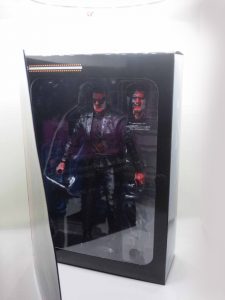 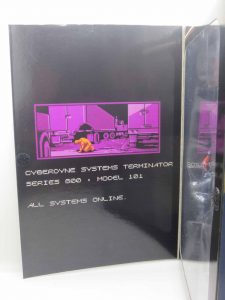 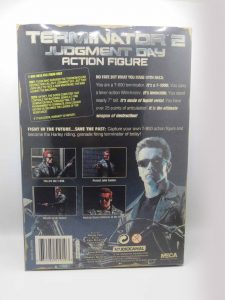 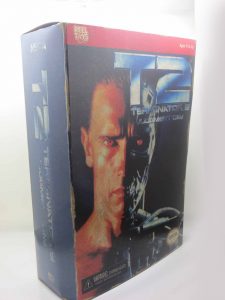