NECA’s Aliens Series One Is On The Way 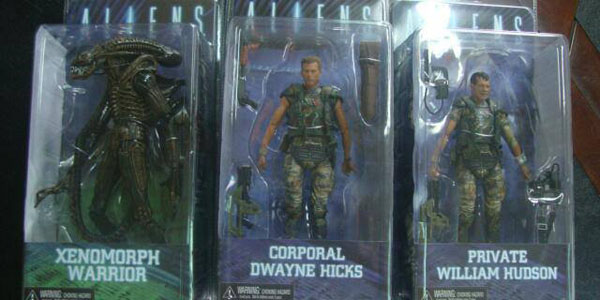 Get ready to own the coolest movie toys of the year!

It’s been a long road for NECA’s Aliens toy line. First announced at Toy Fair 2012, NECA piqued our interest right away with the prospect of hyper articulated Colonial Marines, the one missing piece from many past runs at the Alien franchise.  There’s been a few delays since then, as NECA makes sure everything is perfect on their first lineup, which includes a brown-toned Alien warrior as well as Marines Hicks and Hudson.

Earlier this month, it looked like the series may have been pushed back yet again to an unannounced date, but based on the picture above, these badass figures look ready to me.  NECA Tweeted the above picture along with word that Aliens Series One would be arriving at their warehouse by the end of the month, which means we’ll start seeing them at retail by early June or so.

In the meantime, NECA also posted many more of their newest toys on their eBay store– they have listings now for Rambo, the Lone Ranger 7″ figures and more.  Click Here to check out their latest additions!