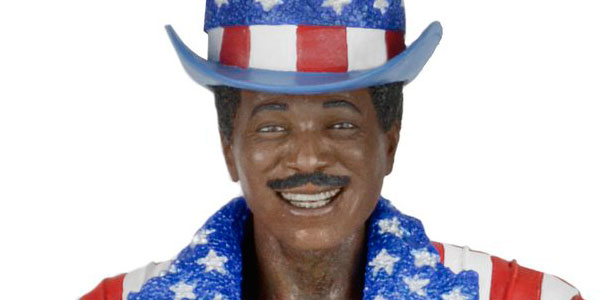 Properties and likeness rights of the past can be a fascinating thing.

In the past week, NECA revealed their new Apollo Creed action figure, a depiction of the champ in his over-the-top Rocky IV era paraphernalia, including the Uncle Sam-themed vest, a patriotic top hat, and an alternate grinning portrait.  It’s a great figure, and when the second wave of classic Rocky figures hits retail, you better believe I’ll be tracking this one down.

First look at the new Apollo Creed from Rocky IV part of Series 2 due out this Fall. Hat & Coat are removable #tbt pic.twitter.com/CWd4fGnB8w

But what’s most interesting about this reveal has nothing to do with the Rocky franchise.  Shortly after NECA showed off the prototype of their upcoming release, the actor who played Apollo himself, Carl Weathers, reacted to the news on Twitter.  This sparked a short but intriguing back-and-forth between Weathers and NECA on Twitter, regarding the likeness rights for what is arguably the actor’s second-most iconic screen role, Dillon, that sonofabitch from Predator.

we would love to Carl, especially for the 30th Anniversary next year, please DM or email me anytime to discuss more https://t.co/bRZnaduaaE

In the past, NECA has released a few variants of Arnold Schwarzenegger’s Dutch in their fantastic Predator toy line, but he remains the sole human entry in the collection.  While many fans have made the seemingly logical leap that– since he approved likeness rights to make an Apollo Creed figure– NECA should have carte blanche to also use Weathers’ likeness for a Dillon toy, the reality is not that simple.

In terms of modern blockbuster movies, every actor is involved in likeness negotiations and rights agreements long before the camera starts rolling, but a few decades ago, things were very different.  Nobody involved with the original Predator considered optioning toy rights, or any of the legality which that would entail (hell, as a hard-R rated movie, why would they?).  And as such, now– thirty years later– few can even parse out who, exactly, would need to sign off on the rights.

NECA has tried to get approval for a Dillon action figure for their Predator line in the past, but it never came to fruition.  Even if an actor signed off on their physical likeness, there are still studios and managers and producers to contend with, each with their own hand in the property and the likeness rights that come with it.  Thirty-odd years after the fact, many of these stakeholders have moved on, contracts are buried under decades worth of new documents, and some production houses simply no longer exist.

But the first step with any merchandise based on a movie character is the actor themself, and NECA caught a windfall in regards to Dillon.  It’s quite possible that this initial interaction between Weathers and NECA will not lead to anything… but in the event it does, it serves as the perfect example of NECA’s dilligence.  They’ve made a name for themselves for always keep an ear out for the next opportunity to create a great toy based on one of the iconic cinema moments of the past.

It’s easy to get frustrated or exhausted thinking about the labyrinthine world of property rights, but there’s a playfulness to exchanges like we saw between Weathers and NECA that’s pretty exciting to see play out.  Despite the ins and outs of the entertainment business world, sometimes all it takes is a little bit of luck, and the ability to talk to the right person to get the ball rolling.  This is another thing NECA excels at, and it’s the reason why Arnold Schwarzenegger’s Dutch and Sigourney Weaver’s Ripley have made it to the toy aisle.  It anyone can make Weathers’ Dillon a reality in toy form, it’s NECA.  Fingers crossed, they can work their magic once again.