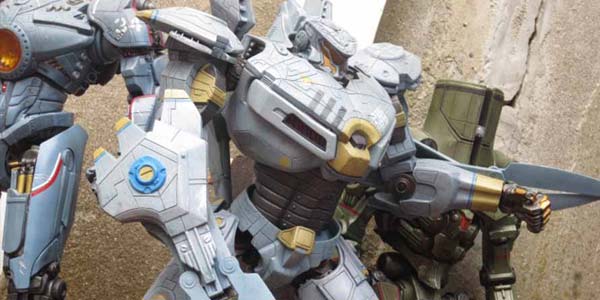 The 18″ Jaeger army expands, with the most elaborately detailed Pacific Rim robot yet from NECA.

Pacific Rim was, more than anything, a movie loaded with amazingly cool character designs.  From the monstrous Kaiju to the heroic Jaegers, each design was a perfect blend of practical, fantastical and iconic.  They were also amazingly, breath-takingly colossal.  This is why, of all the great Pacific Rim toys released by NECA, their 18″ scale Jaegers and Kaiju are the most impressive, conveying that same sense of physical grandeur as their big screen counterparts.

The newest figure in this series is Striker Eureka, the Australian Jaeger that served as one of our main “hero” mechs in Guillermo Del Toro’s movie.  Striker was the most traditional anime-style Jaeger, with its exaggerated broad chest, Macross-esque head shape and massive back fins.  NECA’s new figure renders this robot perfectly in this scale, with an impressive attention to detail both large and small.  Before we drill down into that, though, I’d like to note that not only does the Striker Eureka figure retain the recognizable silhouette of the movie mech, but it looks absolutely perfect marching alongside its fellow epic-scale Jaegers, Gipsy Danger and Cherno Alpha.

Once you move beyond the broad strokes anime mech aesthetic of Striker, your eye is immediately drawn to the intricacies of the figure’s detailing.  The linework, breaking up the panels of the figure’s frame, is clear and concise, providing both texture and a sense of realism befitting the giant machine, which is in essence a walking battleship.  There is a streamlined nature to this figure’s design, which makes him seem sleeker and more aerodynamic than the other Jaegers, and NECA’s sculpt captures this perfectly.  Even still, the sculpt pays great attention to the tinier details in the mechanics between armored panels on the figure’s exterior; the subtle wire and mechanical workings within Striker’s hips, knees and elbows is beautifully rendered, adding a true sense of depth to the overall piece.

Striker features a good amount of articulation, and a solid range of motion, overall.  While the inset head is limited by the shoulders and chest that envelope it, the shoulder articulation is phenomenal.  Like the smaller 7″ figure, Striker features two joints to compose the shoulder, one allowing forward/ backward motion, and a second hinge to raise and lower the arms.  On the smaller scale, this got a little awkward and ungainly, but for the 18″ version it works perfectly, offering great mobility as well as a sturdiness sorely lacking in the previous release.

The torso gets two swivels, both of which appear to be on ball pegs, but which offer nothing but lateral movement on my figure (I didn’t want to force anything).  And the legs are quite good, too, with hinges and swivels at the hips, hinged knees and ball socket ankles.  By design, Striker is a top heavy figure, due to the incredibly bulky chest and fins.  But the figure does an okay job at standing upright, thanks in large part to these well articulated legs, which can be posed to balance the massive, heavy figure.

Like the other Jaegers, Striker Eureka features an excellent paint job, with multiple washes layered onto its blue-grey exterior to highlight the details of the sculpt, and convey the impression that this mech is made of real, tarnished metal.  Striker features film accurate highlights of tan, black, gunmetal grey and gold, all of which break up the uniformity of its main body tones. I love the airplane-like tampo work, especially the bulldog cartoon badge on Striker’s chest.

And the figure features multiple lights built into its head and chest, activated by a button sculpted into the armored panels on the Jaeger’s back.  Striker’s lights aren’t quite as bright or plentiful as Cherno Alpha’s, but they work very well regardless.  It’s a great added value feature, and I’m particularly taken by the cool purple filter on Striker’s chest, changing up the color of the light that shines through on the figure’s sides.

NECA has done some exceptional work with their 1/4 scale figures in the past, but Pacific Rim is the first property where appreciating these figures from afar wasn’t good enough.  I’m glad I jumped in on this line, because they are just about the coolest, most detailed and overall FUN Pacific Rim collectibles on the market.  There are no better Pacific Rim toys than NECA’s 18″ action figures.  And quite honestly, I doubt there ever will be. 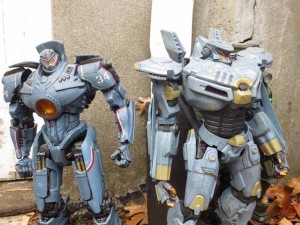 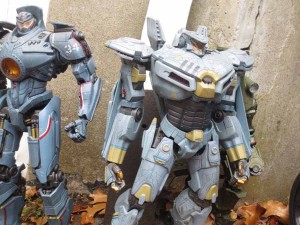 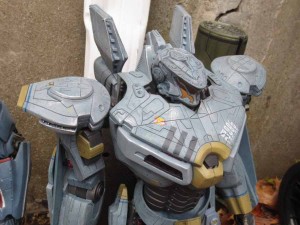 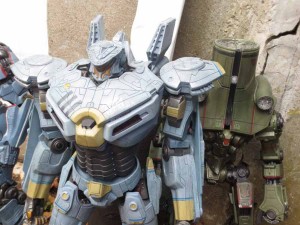 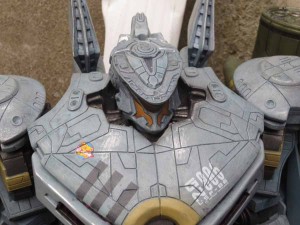 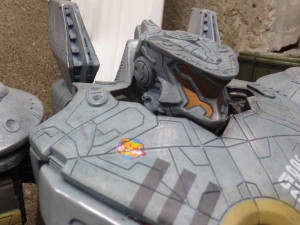 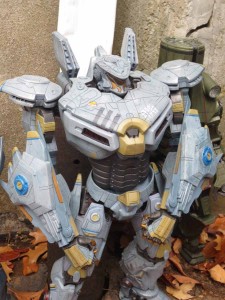 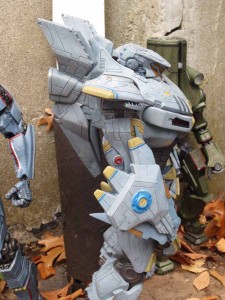 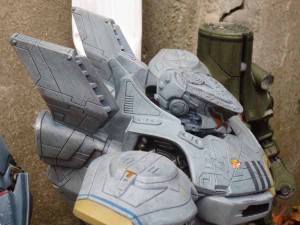 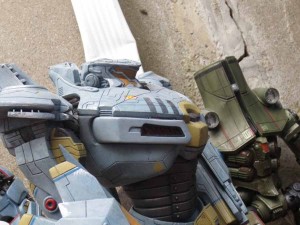 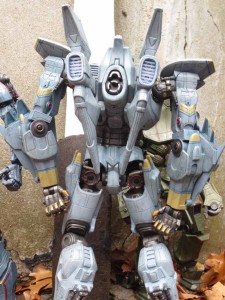 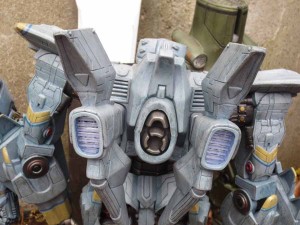 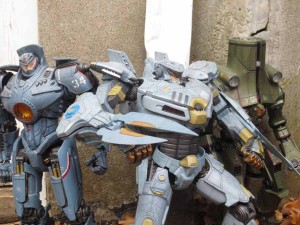 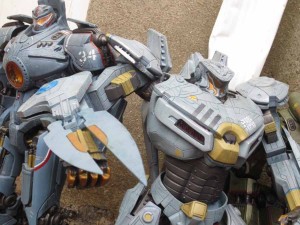 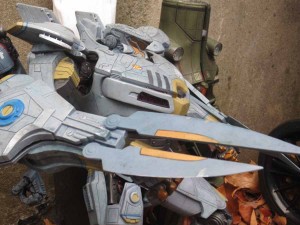 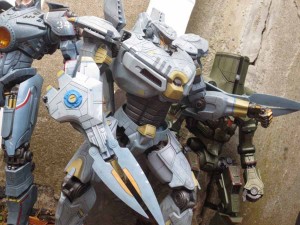 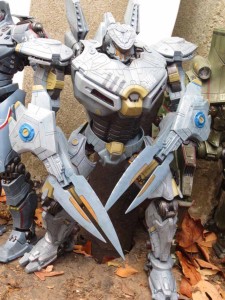 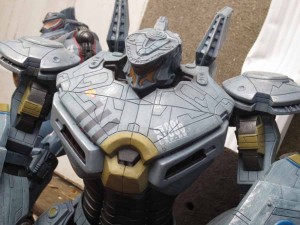 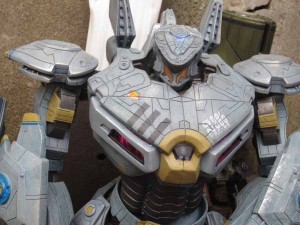 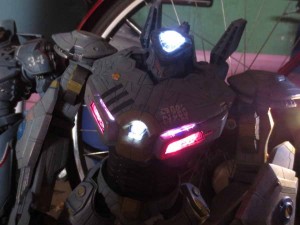 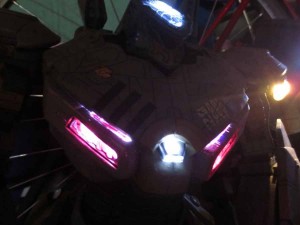 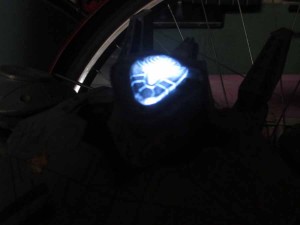 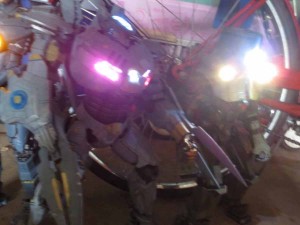 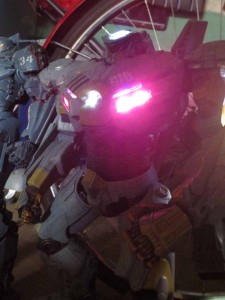 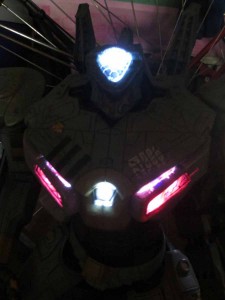 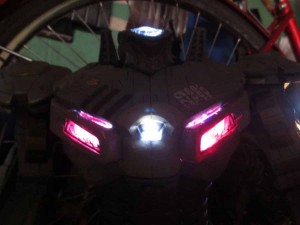