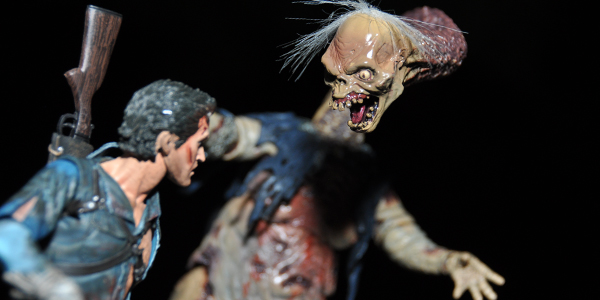 While they’ve tackled various iterations of slasher extraordinaire Jason Voorhees previously, the first series in NECA’s new Friday the 13th line consists of two Jason sculpts specifically modeled after his appearance in the third film.  Beautifully detailed and a blast to play around with, these pieces are easily some of the best figures to ever make use of the license.

The decision to kick the line off with a “Part 3” Jason was a wise one as NECA obviously wanted to portray the classic character as he is most well-known.  Sure, fans that follow the series are equally familiar with the bag he used to haphazardly cover his face in his Part 2 debut as well as the many tweaks made to his battle-torn body and wardrobe as the years progressed, but no one would argue that his appearance in the third movie is clearly the “definitive” version.  With that in mind, let’s take a quick look at both stunning figures from Series One. 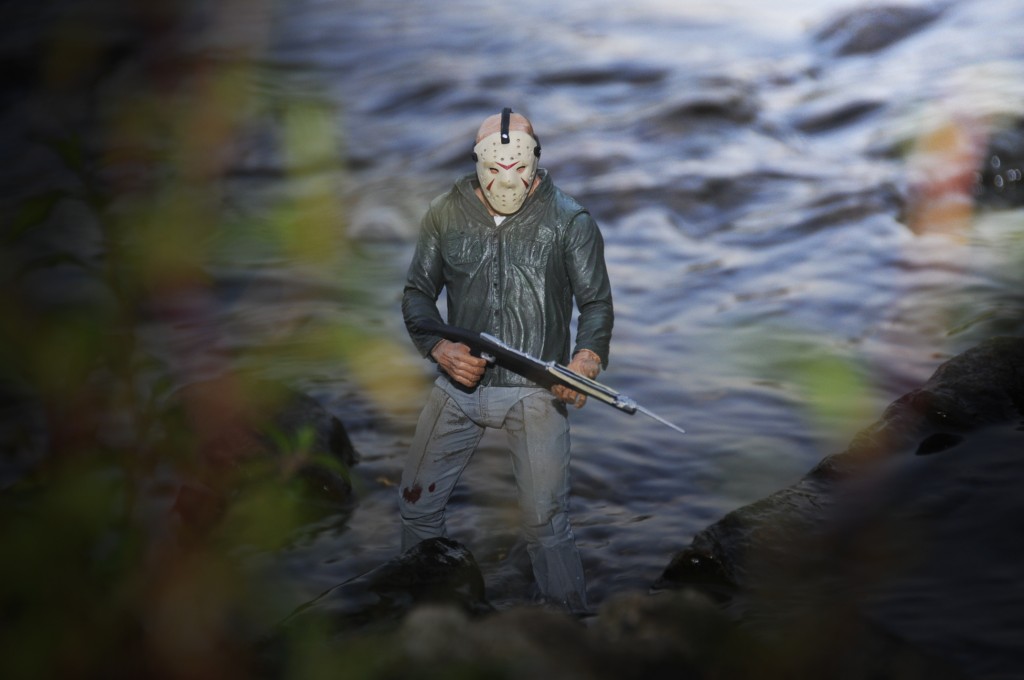 Fans of the film are really in for a treat here.  Before I even get into the spot-on detail present throughout, the figures themselves just feel right.  Standing nearly 7.5” tall, Voorhees has a solid, weighty design that gives off a really ominous presence.  Similar to the various Ash figures from NECA’s recent Evil Dead 2 line, Jason’s upper torso is covered by a soft, flexible shirt which was installed over his body, adding an extra layer of depth and realism to any already stellar build.  As both the upper torso and pelvis are covered with this flexible rubber material, you will see it shift and yield slightly to accommodate the limbs in more extreme poses while always maintaining a uniform appearance.  It’s such a great way to engineer the figures as these areas not only mask several articulation points, they provide a unique tactile sensation when handling them.  Speaking of articulation, both Jasons sport a ball-jointed head, ankles, waist, shoulders, hips, and wrists with swivel/spin joints in the elbows and knees.  None of these really affect the figures aesthetically, however, as NECA consistently does a great job of engineering joints in such a way that they blend effortlessly into the design. 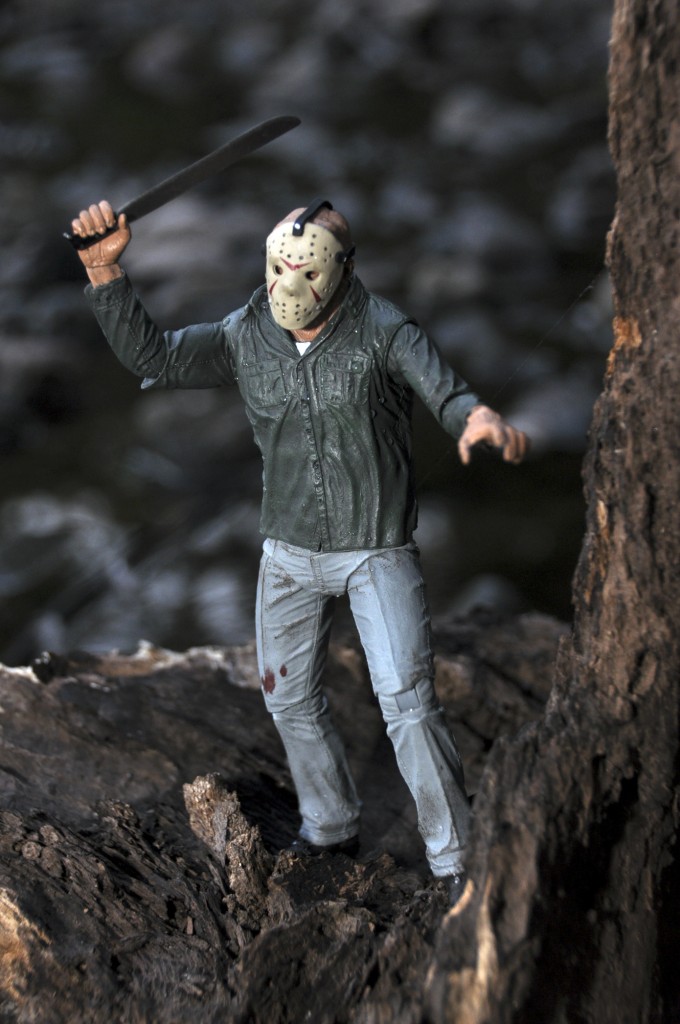 While both figures feature a largely identical sculpt, their heads and masks differ significantly.  The “standard” Jason features an unwounded head model and a removable, undamaged version of his iconic hockey mask.  A tremendous amount of work obviously went into ensuring both the mask and face were perfect.  From the subtle paint work showing wear and scuffing on the mask to the incredible detail in the head design, NECA absolutely nailed it.  In fact, Jason’s deformities are brought to life so exquisitely here that you may end up wanting to display him maskless.  Packaged with a machete and spear gun, his right hand can grip either weapon well while his left hand remains open.  There are very subtle color variations present on both Jason’s green shirt and light blue pants that accentuate the hundreds of lovingly-rendered folds and wrinkles and both figures include a large blood stain just above the knee resulting from the stab wound he received in the final act of Friday the 13th: Part 3. 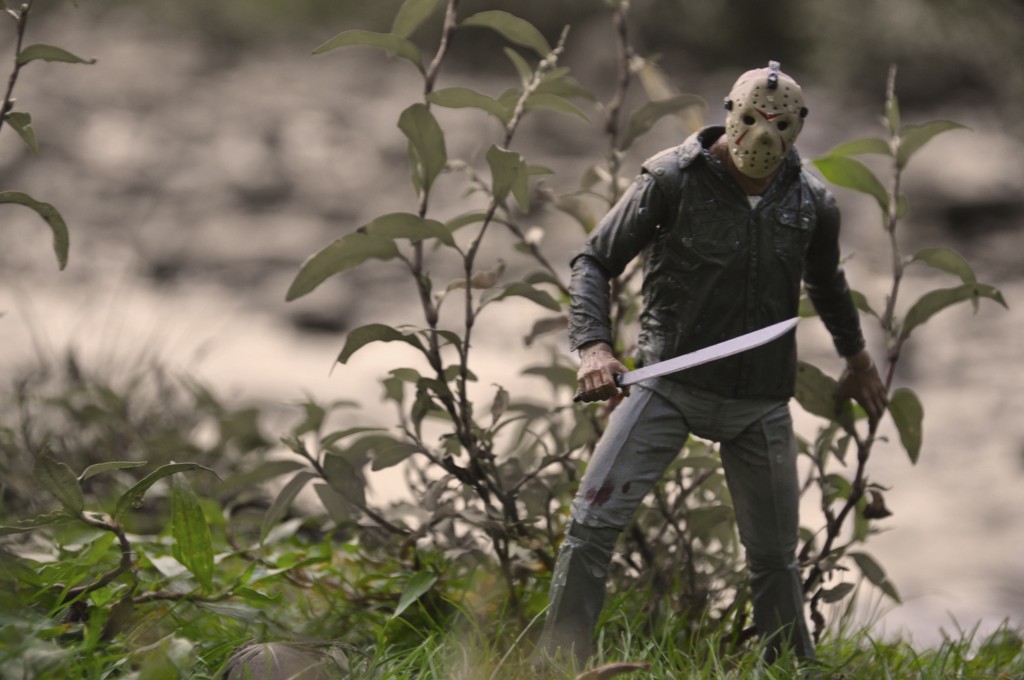 In addition to the leg wound, the “battle-damaged” version of Jason Voorhees also features a gore-stained shirt with blood streaming down his face and neck from an open wound on his head.  Similarly, his trademark hockey mask is cracked and bloodied and the machete he’s packaged with is spattered with blood as well.  This figure comes packaged with an axe to wield and, as an added bonus, the axe can actually be imbedded into the gaping head wound and mask to recreate the sequence in the film where Chris puts him down for the count.  The facial expression on this version is also a bit more ferocious and crazed, likely to resemble the final scene in Chris’s nightmare in where he is running towards her sans mask while she’s helplessly floating in Crystal Lake.  Although similar in design, both figures really compliment each other well and picking them both up lets you display them in two totally different fashions. 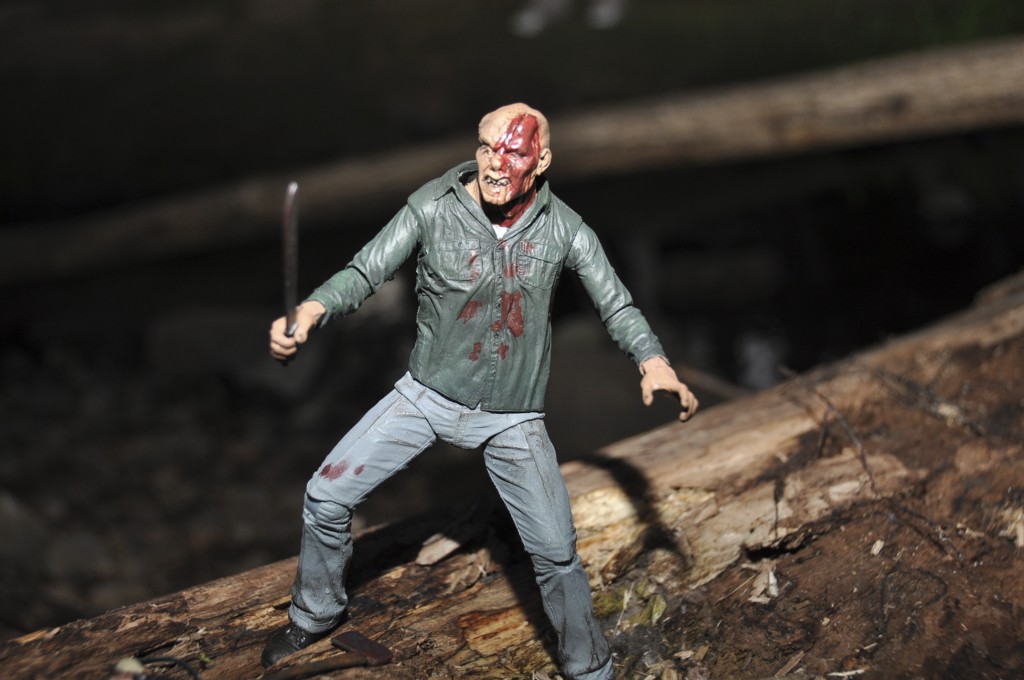 One thing you can’t truly appreciate on these figures until you actually see them up close and out of the package is how completely incredibly the mask and face work in unison with each other.  The mask fits nice and snug over Jason’s head and lines up perfectly with his eyes, which look so unsettlingly real peering through at you that it sometimes looks indistinguishable from the actor in the film.  Their must be some clear coating on them that catches a bit of light as well, because his pupils show just enough of a glint through the mask’s eye-holes to be noticeable.  It continues to wow me so much that I find myself pulling the figures off my shelf over and over just to ogle at how wonderfully engineered the figures’ head and mask combination works. 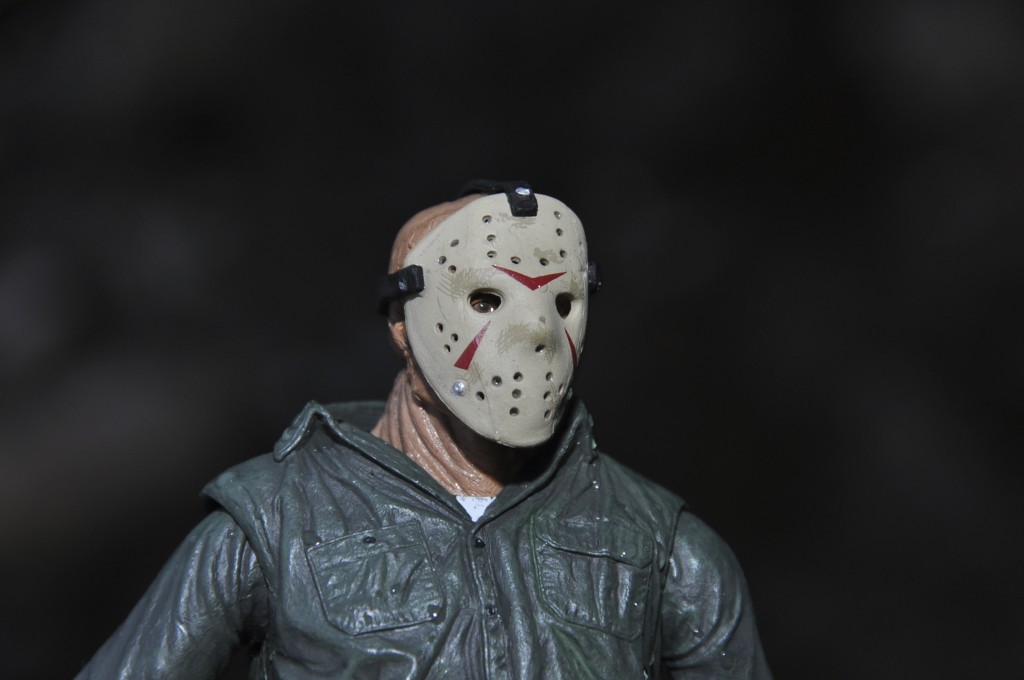 This set is just one more example of how dedicated NECA is to their craft and how much thought goes into their pieces.  I couldn’t recommend their Friday the 13th: Series One figures more highly to hardcore fans of the films or horror enthusiasts in general as they represent the character in his most iconic, memorable form and are damn fine toys to boot.  There have been plenty of Voorhees action figures produced over the years but the classic appeal, solid construction, and excellent playability of this line puts it at the top of the list, truly delivering on NECA’s promise of producing the definitive Jason figures.  Although they do them no justice, check out some fun high-res shots below: 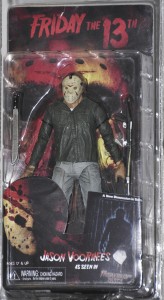 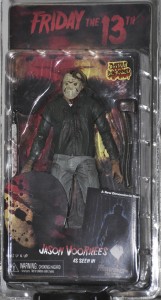 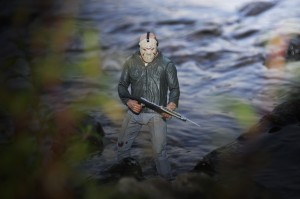 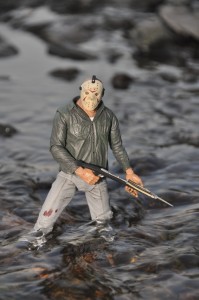 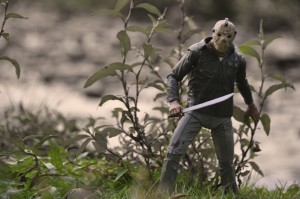 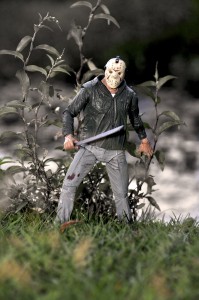 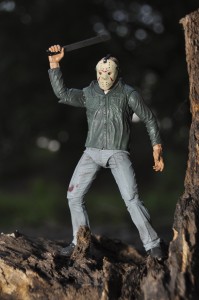 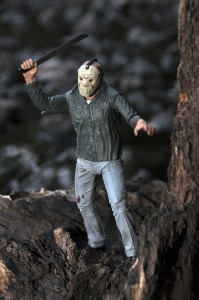 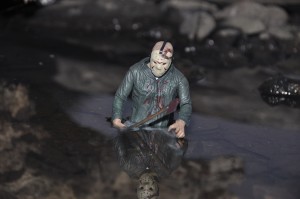 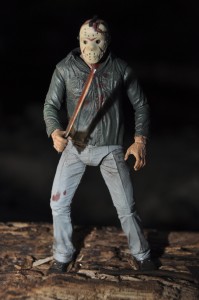 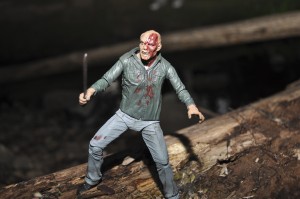 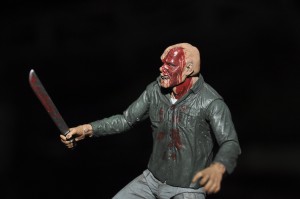 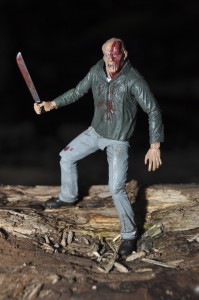 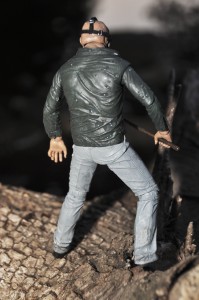 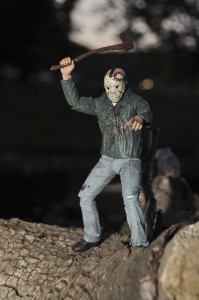 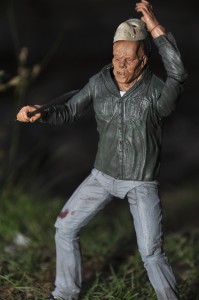 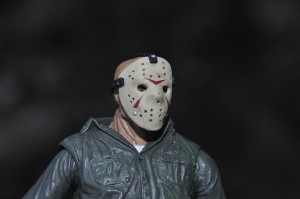 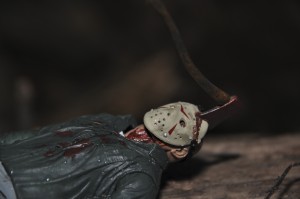 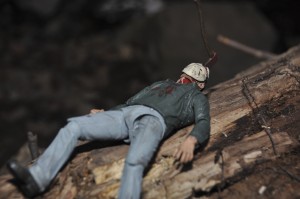 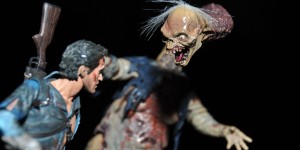