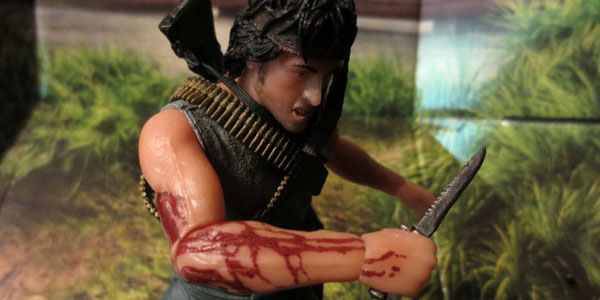 The debut figure in NECA’s Rambo series reaches way back to the original movie to deliver a cool new version of John Rambo.

Rambo is one of those weird Friday the 13th style franchises, where the most iconic stuff, the aspects that became etched in pop culture, took place later in the series.  The first Rambo movie, First Blood, never saw our Vietnam vet hero in his classic shirtless, red bandana look… that was all in the sequel, First Blood Part II. 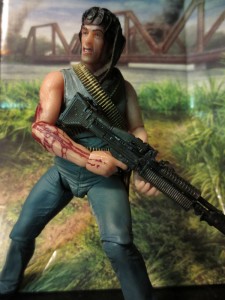 I think it’s interesting that NECA opted to kick off their Rambo collection with the character’s original look, holding the more iconic military figure for later in the series.  In some ways it’s a smart move and a good one for NECA– the guys over there are steeped in 80s awesomeness, and releasing this “old school” Rambo feels like a street cred move– Hell, we’ve had a bunch of First Blood II style Rambo figures over the years, but nobody has really ever done this version.  Still, it’s playing a risk, in that if this more obscure variant doesn’t sell, the toymakers might not make it to the iconic Rambo.  We saw an experiment like this pay off in the Evil Dead 2 line, where the most famous Ash didn’t come out until the second series.  We also saw this strategy hurt a line like Prometheus, whose main protagonist Elizabeth Shaw is now trapped in limbo, due to soft sales of the waves the preceded her.

As for Rambo I think it was a great call, and the resulting figure is quite good.  John is depicted in his sleeveless grey shirt and blue jeans, packing a knife and his super imposing machine gun, complete with three ammo belts that hang on his shoulders and around his waist.  The sculpt is as amazing as we’ve come to expect from NECA– there is a fantastic sense of scale, and the use of soft PVC overlay pieces like the shirt, crotch of the pants and bullet belts hide his ample articulation very well.  There’s a great sense of scale to this guy (including his massive gun), and the inclusion of alternate right hands allows him to hold either the trigger of the gun or his knife very organically.

The Sylvester Stallone portrait is very good, though I think it falls just shy of the uncanny photo-realism of the recent Schwarzenegger Dutch from the Predator series.  While his steely grimace looks just slightly over the top, the face absolutely still rings true as Sly, and the added details of his mussed up hair and the blood running down from his temples makes for a cool overall aesthetic that’s very true to the character. 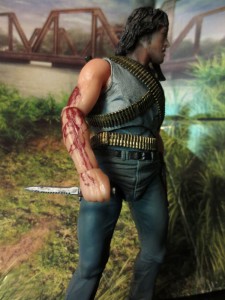 Like the other recent human figures, NECA uses a translucent skintone plastic for Rambo, which further enhances the figure’s realism.  The Dutch figures used the same material, but it did work slightly better on them than Rambo.  Unlike Dutch, Rambo’s skin– especially on the arms– is largely unpainted.  The plastic looks good, but the wash on top of the semi-clear material is what made Dutch so uncannily realistic.  Without that paint app, Rambo looks good, but just shy of that same photo-real effect.  The rest of the figure is painted very well, with a great subtle shading on his clothes and a well done 5 o clock shadow, as well as some excellent blood spatter on his face and dripping down his right arm.

As I said earlier, the figure is also very well articulated, the engineering achievement NECA recently focused on in many of their figures to great results.  Rambo is as well articulated as the Predator figures, offering a lot of fun and a huge amount of posing options.  From the excellent ball neck to the well hidden leg articulation, Rambo is a remarkably expressive figure, and each of his many badass action poses can be reached easily, looking very natural the entire time.

I’m quite happy with NECA’s new Rambo figure.  His early appearance is a welcome change of pace from the more iconic look of the character, and he’s as well designed as NECA’s other recent success stories such as the Predators that continue to blow the minds of collectors everywhere.  With an incredibly exciting new round of figures coming in the next 30 days– including the amazing Pacific Rim Series One, Predator Series 9 and the long awaited Aliens, Rambo feels like a great appetizer before NECA’s impossibly awesome main course this Summer. 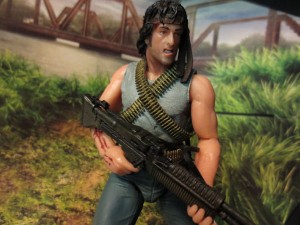 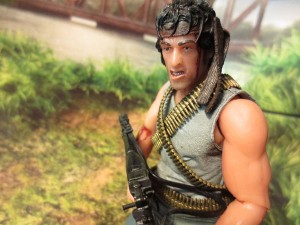 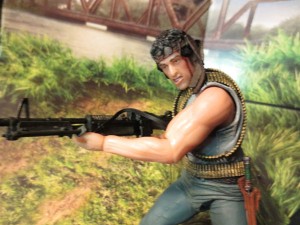 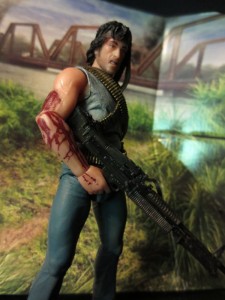 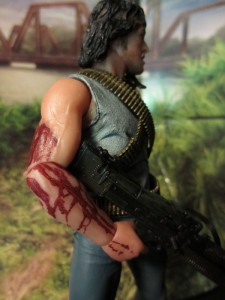 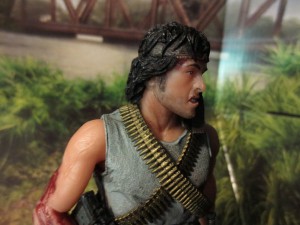 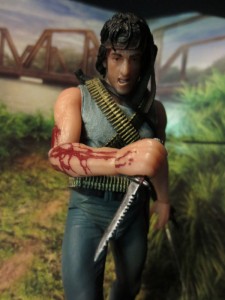 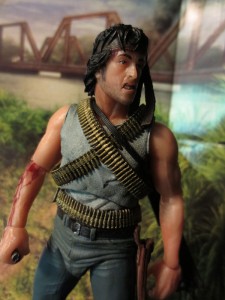 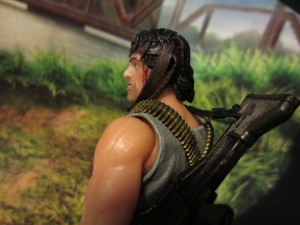 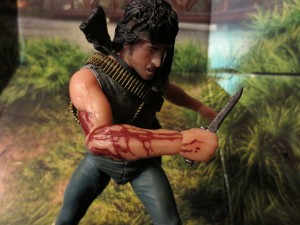 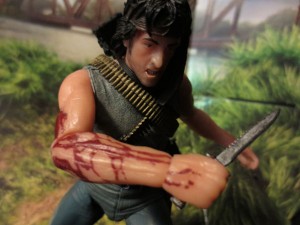 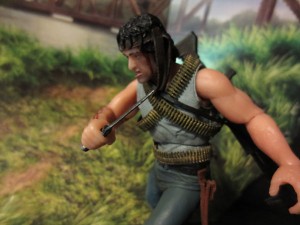 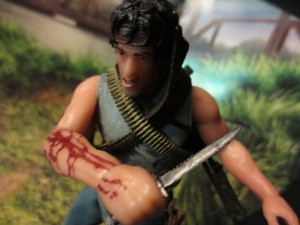 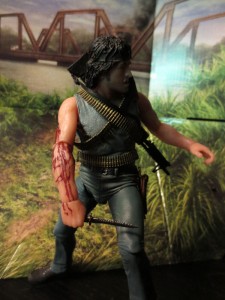 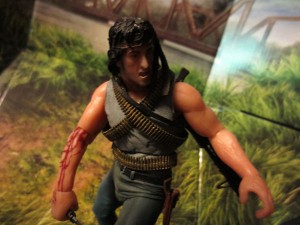 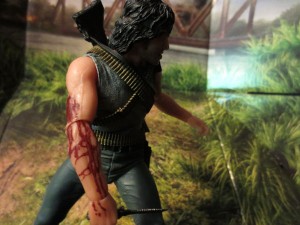 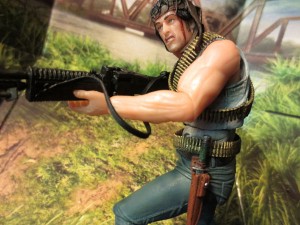 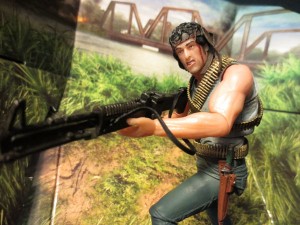 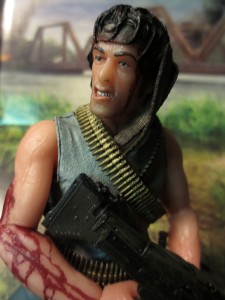 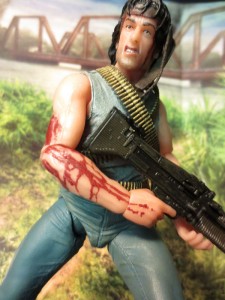 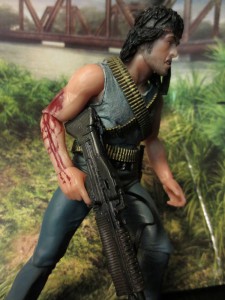 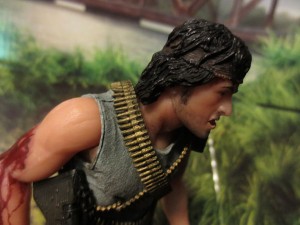 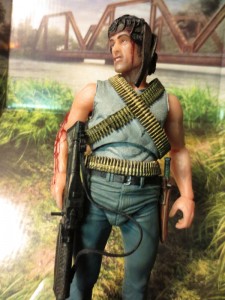