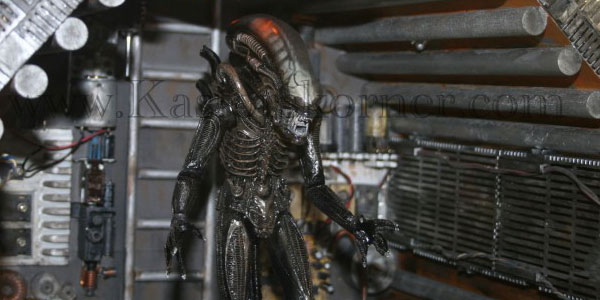 Randy Falk from NECA gives some hints into what Aliens fans can expect in 2014.

Randy Falk sat down for a video with Arcade Sushi, and he spoke on NECA’s Kenner Predators, future plans for slashers like Jason ad Freddy, and some new info on the Aliens universe, which NECA finally launched this year.

Some of what Randy had to say is fairly obvious– there will be some kind of xenomorph in every series– but he emphasized the importance of humans in this collection, as well.  We’ve already seen the Nostromo space suit, which will apparently be retooled to make a base for several figures in the series, and we will see Bishop, Dallas and Jonesy… But Randy said with a giddy smirk that they do have more likeness rights booked (my guess? At least Vasquez, maybe Ripley).

2014 marks the 35th anniversary of the original Alien movie, and NECA will definitely be celebrating that milestone all year long, but unlike the Predator figures, with their themed waves, the Aliens line will pull a mix from the franchise into each assortment.  Randy suggested we might see a wave along the lines of Bishop, Dallas and the Dog Alien from Alien 3, with Dallas featuring special 35th Anniversary packaging.  Series 3, 4 and 5 will all follow this model, which is cool because A.) it means we’re getting at least three original film figures after Series Two’s Big Chap, and B.) there will be at least three waves of Aliens figures in 2014!

We will certainly learn more about the 2014 Aliens series at Toy Fair next February (if not sooner), and in the meantime we have Series Two to look forward to, which should be hitting in the next few weeks.  Check out the whole interview below… Who are you just dying to see in NECA’s Aliens collection?