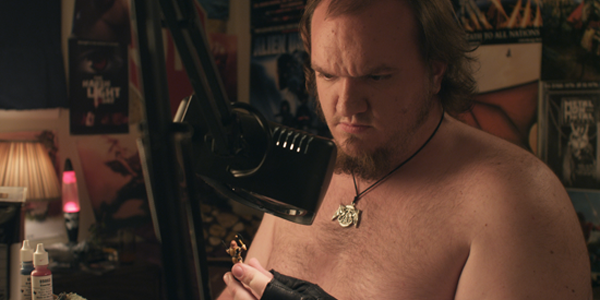 The SXSW darling gamer comedy Zero Charisma gets picked up by Tribeca Film and The Nerdist.

One of the most buzzed about movies at this year’s SXSW was Zero Charisma, a D&D inspired dramedy that takes a biting, honest, loving and hilarious jab at nerd-dom.  The film is the first fictional movie by the duo behind the excellent Troll 2 documentary Best Worst Movie, Katie Graham and Andrew Matthews.

I’ve heard nothing but great things about this movie, and I’m so stoked I’ll finally have the chance to see it, when it gets released in October!  This is one of those movie that’s been so universally revered, I’m not surprised to find it get picked, up… but getting picked up at Comic Con, and as the first film from Chris Hardwick’s The Nerdist, just makes a perfect, beautiful sense.

Here’s the official word on the pick-up, as well as the brand new trailer that debuted at Comic Con… Get ready!

Tribeca Film and Nerdist Industries will co-release the film this fall beginning October 8, 2013 on cable/telco and satellite video-on-demand platforms, as well as iTunes, Amazon Watch Instantly, VUDU, Playstation, and Google Play, followed by a theatrical release on October 11, 2013.

As the strict Game Master of a fantasy role-playing game, Scott (Sam Eidson) leads his friends in a weekly quest through mysterious lands from the safety of his grandmother’s kitchen. But his mastery of his own domain starts to slip — along with everything else in his life — when neo-nerd hipster Miles (Garrett Graham) joins the game, winning over the group with his confident charm and dethroning Scott with an unexpected coup. Caught in delusions of grandeur, Scott must roll the dice and risk everything to expose Miles as the fraud he believes him to be. A darkly comedic fable of epic proportions, Zero Charisma is an ode to nerds from every realm.

States Nerdist founder and chief creative officer Chris Hardwick, “My podcast mate Jonah Ray saw Zero Charisma at SXSW and immediately texted me to say it was one of the best movies of the year. When I saw it, I knew I had to tell as many people as I could about it. It’s hilarious, touching, beautiful, authentic and an eerily accurate echo of my first D&D group in the 80’s. I think the character of Scott will become a cultural hero. He is the personification of the nerd rage that boils in all of us when PEOPLE. DON’T. FOLLOW. THE. RULES. OF. THE GAME.”

“We couldn’t be happier to be working with the Nerdist and Tribeca Film.  Both organizations have such credibility with audiences, cultural acuity and such love of storytelling, we feel very confident trusting them with our first film,” said Andrew Matthews & Katie Graham, co-directors of Zero Charisma.

Peter Levin, CEO of Nerdist and Jon Patricof, President and COO of Tribeca and Alison Diviney, manager of acquisitions, negotiated the deal with Adam Sher providing legal representation for the filmmakers.