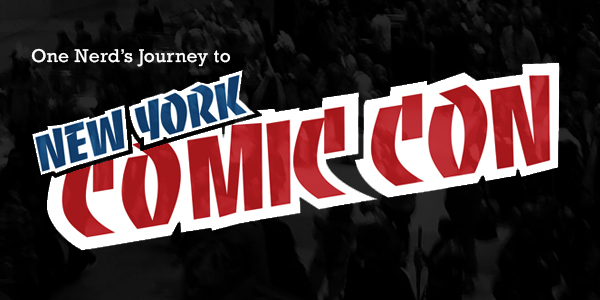 Another New York Comic Con has come and went in a blaze of action, costumes, and hordes of people.

It was a long bus ride into New York, mostly due to the anticipation. Now that I’m older, NYCC brings the same anticipation that I used to feel for Christmas. You can’t help but feel the excitement as you approach the Javits Center and start noticing your favorite characters from comics and video games wandering the streets of Manhattan. I mean, I waited at a crosswalk with Dr. Who and Boba Fett, and it turns out I can walk faster than both of them. It took little time to dodge the scalpers and make it to the back of the line. Making it to the front of the line took notably longer, and required more patience. Though, once I made some new friends to talk to, the wait didn’t feel as long. This is a fairly common occurrence and helps pass the time in all the various lines at NYCC. Truthfully no line was ever too long, but anything that is delaying my entrance into nerd heaven was far too long.

Once you get beeped in, you’re thrusted into the thunderdome, better known as the con floor. The show was expansive. For those that have never experienced it, it’s a marketplace of madness chock full of pretty much any nerd related knick knack you could want. I managed to grab some new indie comics and picked up a fun game called Sushi Go. I also talked to my new pal Liz at the Skybound booth and added some new books to my stack of trade paperbacks at home. Notably Witch Doctor, a story I didn’t know about and was fun as hell to read. Seriously grab a copy of that if you can, especially if you’re a fan of shaking babies to see if they’re aliens. My most interesting conversation of the weekend was had on the floor, and it wasn’t even about comics. I had the pleasure of meeting Molch-R over at the 2000 AD booth and got both a history lesson and some information on war reenactments.

There were toys up the wazoo, some in glass cases, others in piles and buckets. I saw these really interesting belt buckles that close using a mechanism. They look pretty cool, especially if you want the act of taking your pants off to be any more exciting than it already is. There were video games set up, but I was far too impatient to wait in line to try any out. Given that impatience, I know I walked up and down every aisle, but I’m sure I missed out on stuff. How can you not? Between trying to fit inbetween people to get a look through a long box or accidentally dozing off while moving at a snail’s pace it was hard to stay on the floor for long periods of time.

NYCC also has a pretty large artist alley as well, once you’re able to find it. After making the long trek past the dancing unicorns and Flo, the reward of a large room filled with talented artists was worth the trip. Some of the stuff that stuck out was meeting Mitch Gerads and grabbing a copy of his indie book The Activity. I am a big fan of how he made The Punisher look, so I needed to dive deeper into his backlog. Chris Uminga is still killing it, with long lines at his booth preventing me from stopping by every time I checked. Don Cates is the man. I gave him a copy of a story I wrote that also has a pin up he had featured in The Ghost Fleet and he let me in on a little secret about an upcoming Paybacks moment. It involves a unicorn, and it’s going to be pretty sweet. There were a lot of unicorns this year now that I think about it. There was so much more, but to try and recount every detail is painful. Just know this, there is a butt load of super talented artists that hang out in New York on Columbus Day weekend. They will draw you things for money, it’s pretty fantastic.

My most enjoyable moments of NYCC came after the convention was closed. One night was spent bowling and hanging out at the Robot Chicken season 8 launch party. They showed the upcoming Superman v. Batman special, which was pretty hysterical, and we got to bowl and wear Batman capes. Thanks Adult Swim! Another night was spent meeting indie creators like myself at the Creator After Con Network party. It was really great meeting a bunch of like minded creators just looking to make cool things. I feel like I made some long time contacts while talking about farts, busses, and brushes while sipping on some beer.

By the time Sunday came, I was barely able to stand. I had developed blisters larger than silver dollars on both feet. My shoulders ached from carrying a backpack full of books back and forth from Jersey City to Javits. I was coughing a little more than normal, probably a sign that I was developing the inevitable case of post con cold. And in that moment, I couldn’t have been happier. Thank you to all the creators, staff, and fellow fanboys that make it all happen. I’ll see you next year.