Five Nerdy Things To Be Thankful For 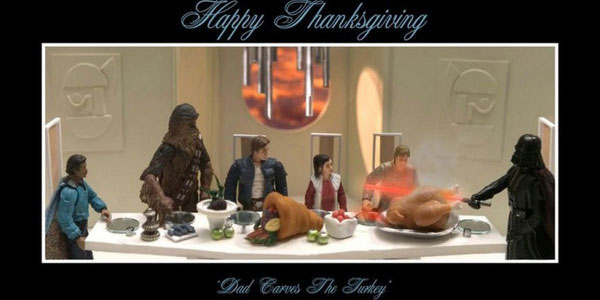 It’s Thanksgiving, so in the spirit of the holiday, here’s my list of five things my fellow nerds, film buffs and toy collectors should be thankful for…

Things weren’t looking too bright for Hasbro’s 3.75″ toy line earlier this year, but with the last few waves of figures finally hitting retail en mass (while Wave 21 is beginning to trickle out as well).  And this week Big Bad Toy Store posted preorders for the long-in-limbo Wave 20, so fans will finally be able to own Nova, Hercules, Puck and the rest… along with new Team Packs like the West Coast Avengers, featuring the first ever Mockingbird!

Imagine the dryness of most historically accurate period pieces.  Now imagine the typical Steven Spielberg Oscar-baiting melodrama.  Now throw both those out the window, and what you’re left with is one of the year’s best films!  Lincoln features an incredible cast, all at the very top of their game, led by Daniel Day Lewis’ astonishing transformation into the beleaguered President.

3. Castle Grayskull is going to happen

Mattel’s iconic playset received the required number of preorders earlier this month, so the castle is going into production for a December 2013 release date.  Yes, it’s pricey, and yes Mattel’s track record hints that the final product may very well no match their ambition, but I don’t care– a new Castle Grayskull, in scale with the Masters of the Universe Classics figures, will be an amazing centerpiece for any collection… He-Man or otherwise.  Click here to place your preorder now.

2. Marvel Phase One box set got a release date

I love what Marvel Studios has put together with their cinematic universe.  It’s world building on a more epic scale than we’ve ever seen in a franchise of this size, with Iron-Man, Captain America and their fellow Marvel heroes leading to The Avengers.  The entire evolution will be documented– along with lots of hints about the upcoming wave of “Phase Two” movies— in this 10-disc, 6-movie ultimate box set, which will finally see release next April, just weeks before Iron-Man 3.

1. The new Star Wars is shaping up

When Disney bought LucasFilm last month, it set the collective geek world’s head spinning.  I still think it was a great move for all parties, one that filled me with hope for my long lost love, Star Wars, for the first time in years.  The announcement of a new set of movies, Episodes VII to IX, was met with cautious intrigue more than cynical rejection in light of LucasFilm’s new direction, and that curiosity is slowly starting to change to genuine interest as the first preliminary details come out of pre-production.  Toy Story 3 scribe Michael Arndt will write Episode VII, while Lawrence Kasdan– the writer of Empire Strikes Back and Raiders of the Lost Ark— was just announced as the guy to pen Episodes 8 and 9.  Between this news of some solid writers behind the story, and Jon Favreau as a strong frontrunner for Episode 7’s director, I’d say now is a very good time for Star Wars fans to be thankful.

Have a happy Thanksgiving, from all of us at Kastor’s Korner!