Netflix Daredevil is Back in Black 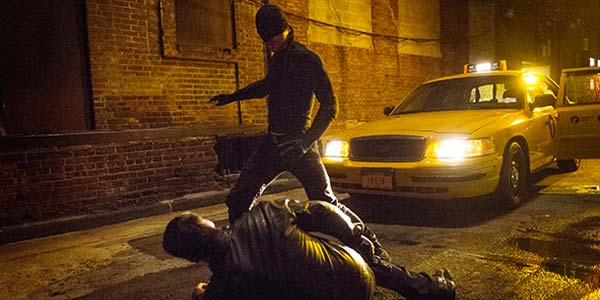 Marvel and Netflix are really sold on Daredevil’s “Year One” look.  Glad somebody is.

Hey look– it’s a new image from the Netflix Daredevil show!  And it’s a shot of Matt in his original, all black bandana outfit!   Again!

EW debuted this rather un-inspiring new still, along with the slightly more hopeful news that, at some point in the upcoming Netflix series, daredevil will don his iconic red costume, thus ensuring for at least some amount of time, he will look like Daredevil.

Beyond that?  Who knows.  I still really like the cast on this one a lot, but everything we’ve seen so far looks just plain boring.  Each time I see another look at daredevil’s disappointing street costume, I recall the first X-Men movie.  I hated those terrible black leather uniforms, but they wound up being forgiven in a movie that– for its time, at least– got so much right.

I wish I could give more optimistic praise than to to Daredevil, but Marvel TV’s track record just doesn’t fill me with a super ton of confidence.  I look forward to eating crow on this one, if it turns out to be good…